FOREX: The US dollar index – which tracks the greenback’s performance against a basket of six major currencies – was 0.3% higher on Monday, touching a fresh high for 2018. Meanwhile, the safe-haven Japanese yen continued to lose ground, weighed on by signs that trade tensions between the US and China are easing.

STOCKS: Wall Street closed lower on Friday, for the most part. While the S&P 500 and the Nasdaq Composite declined by 0.26% and 0.38% respectively, the Dow Jones closed practically unchanged. That said, risk sentiment looks to have recovered as futures tracking the S&P, Dow, and Nasdaq 100, are all currently pointing to a much higher open today, following comments over the weekend suggesting the US and China will put their trade war “on hold”. In Asia, Japan’s Nikkei 225 rose by 0.31%, but the Topix edged down 0.08%. Meanwhile in Hong Kong, the Hang Seng climbed by 0.82%. In Europe, futures tracking the major indices were a sea of green, with the sole exception being Italy’s FTSE MIB, which is expected to open lower.

COMMODITIES: Oil prices were higher on Monday, buoyed by the broader pickup in risk sentiment following news the US and China trade war is “on hold”. WTI and Brent crude are both up by 0.8%. Signs that trade frictions are deescalating reduce the downside risks surrounding global economic growth and by extent, those surrounding global oil demand, thereby boosting prices. The precious liquid may have also received a helping hand by news Nicolas Maduro won another six years as Venezuela’s President. This increases the probability of fresh US sanctions on Venezuela, which may curtail even further the nation’s dwindling oil supply. In precious metals, gold was down by 0.6%, touching a new 2018 low of $1282. The safe-haven is being weighed down by a combination of diminishing risks on the trade front, as well as the continued surge in the US dollar. 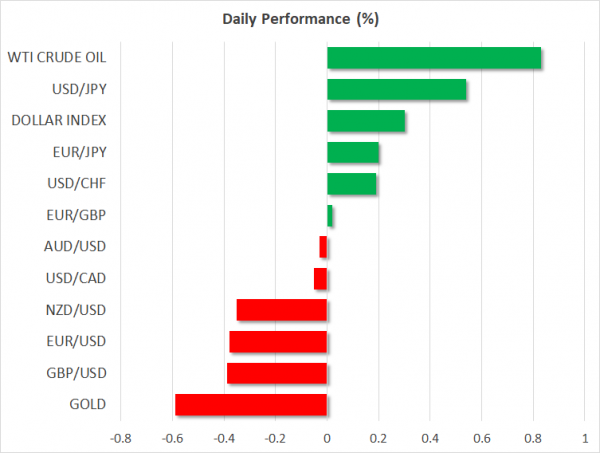 The US and China will hold off from imposing the tariffs they had announced in recent months. Over the weekend, US Treasury Secretary Steven Mnuchin said that negotiations with Chinese officials last week had borne fruit, with the Asian nation agreeing to buy more American goods in an attempt to narrow the trade imbalances between them. Mnuchin said: “We are putting the trade war on hold, right now, we have agreed to put the tariffs on hold while we try to execute that framework”.

Markets reacted in classic “risk-on” fashion, as investors placed bets that the worst may be behind us, and that the situation will most likely be resolved through further negotiations. Futures tracking the major US stock markets are well-into positive territory, pointing to a much higher open today, while safe haven assets like gold and the Japanese yen are markedly lower.

Dollar/yen is more than 0.5% higher, currently trading a few pips below 111.40, having powered through the round figure of 111.00 overnight. The US currency was stronger across the board, with the dollar index touching a fresh seven-month high of 93.97. Both euro/dollar and sterling/dollar dipped by 0.4%, to new six-month lows.

Elsewhere, the loonie came under renewed selling interest on Friday, following relatively soft economic data out of Canada. Strangely enough, the implied probability for a rate hike by the Bank of Canada (BoC) at next week’s meeting barely budged, staying at around 32%. Although the BoC has caught markets by surprise before, 32% still seems a little exaggerated – especially since there are no more data releases or speeches by BoC officials in the meantime.

In Italian politics, the two anti-establishment parties trying to form a coalition government have reportedly agreed on a Prime Minister. While these parties have dropped some of their more radical plans – like exiting the euro – they are still in favor of ramping up government spending, which would directly contradict the EU’s current fiscal rules. This suggests the new administration and Brussels may soon “face off” as Italy attempts to renegotiate EU treaties. Uncertainty around this prospect has likely been among the key reasons behind the euro’s recent underperformance, particularly against the safe-haven Swiss franc.

Monday’s economic calendar does not have much to offer in terms of data releases, with trade and political developments probably attracting the most attention interest.

On the trade front, investors will be focused on news confirming that talks between China and the US over import metal tariffs are indeed heading to a peaceful solution, reducing further the risk for a tit-for-tat escalation. Progress in negotiations could ensure simultaneously that a crucial summit between the US President and the North Korean leader on June 12 may run smoothly. Should risk-off sentiment ease further, the dollar could gain additional demand ahead of the FOMC meeting minutes due on Wednesday.

Meanwhile in the Eurozone, the two populist parties, the anti-establishment Five-Star movement and the right-wing League are due to brief the Italian President on their plans to form a new government, while an announcement on who will be the next Prime Minister is also expected. Note that last week, a leak of information stating that the two parties could ask for a debt relief brought Italian stocks and the euro under pressure.

Elsewhere, Brexit negotiations will resume this week in Brussels, with the potential to bring fresh volatility to the pound. 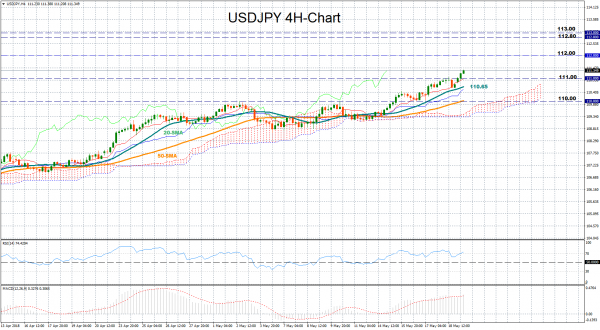 USDJPY broke above the 111 handle on Monday, unlocking a fresh four-month high at 111.36 as fears over an escalation in US-China trade relations continued to recede. The market is now increasing its distance above its moving averages and the Ichimoku cloud in the four-hour chart, pointing to a continuation of the current bullish trend in the short-term. Momentum indicators provide positive signals as well, with the MACD picking up speed above zero and its red signal line. The RSI, though, warns there is not much room left for gains as the index has already entered overbought levels above 70.

Should the pair stretch upwards, the 112 round-level could attract attention. A break above this level could then turn focus to 112.80, a frequently congested area in January before traders seek resistance at the 113 key-level.

On the flip side, a move lower could retest the 111 round-level, while steeper decreases could reach the 20-period SMA, currently at 110.65. A leg below could also open the way towards the 110 area, a stronger support that was challenged by the market several times since the start of the year.