Euro Falls The Stairs Down Amid Political Risks

FOREX: The US dollar advanced considerably versus the Japanese yen on Monday (+0.46%) after the US Treasury Secretary Steven Mnuchin said on Sunday that the US trade war with China is “on hold”. Dollar/yen created a fresh 4-month high of 111.38, while the US dollar index added 0.31% to its performance, creating a 5-month high at 94.05. Pound/dollar plunged to a 5-month low of 1.3394 (-0.46%) ahead of key data this week which could the timing of monetary tightening by the Bank of England (BOE) this year. Euro/dollar slipped to 1.1715, hitting its lowest level in 6 months early on Monday (-0.25%) on the back of a stronger dollar. Antipodean currencies were mixed, with aussie/dollar up at 0.7519 (+0.12%), but kiwi/dollar down at 0.6892 (-0.26%). Dollar/loonie was last seen at 1.2866 (-0.11%). Dollar/lira strengthened to a record high of 4.5634 (+1.43%) as there are worries about the Central Bank of the Republic of Turkey (CBRT) ability to lead in double-digit inflation and President Tayyip Erdogan influence over monetary policy.

STOCKS: European equities were a sea of green on Monday, with Swiss’s blue-chip index and the Italian FTSE MIB being the only exception. The pan-European STOXX 600 and the blue-chip Euro STOXX 50 were up by 0.31% and 0.16% respectively at 1100 GMT. The French CAC 40 surged 0.66%. In Italy, the FTSE MIB 100 declined 0.37%, as the two anti-establishment parties are close to form a coalition government. The British FTSE 100 moved significantly higher (+0.78%), creating a new record high at 7,848. The Swiss index was down by 0.53%, led by losses in consumer cyclicals. Turning to the US, futures tracking the Dow Jones, S&P 500, and Nasdaq 100 were all in positive territory, pointing to a higher open today. 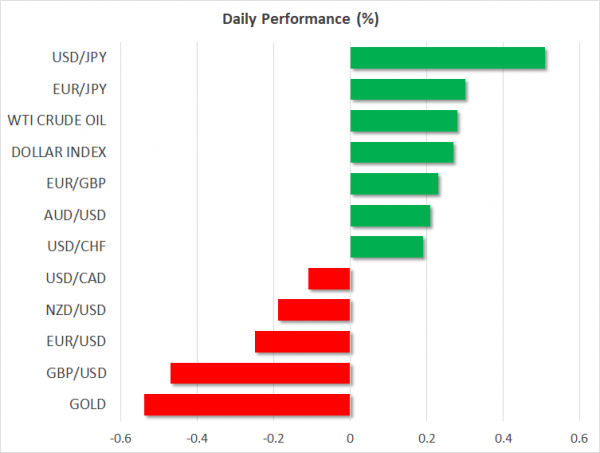 In the Eurozone, the two populist parties, the Five-Star Movement, and the right-wing League will be meeting the Italian President, Sergio Mattarella today at 1700 GMT to inform him on their jointly-agreed plans to form a new government. During the meeting, the Eurosceptic parties are also expected to discuss the identity of the next Prime Minister to rule the coalition government after reports stated on Sunday that a potential candidate has been already agreed. Recall that neither the Five Star leader Luigi di Maio nor the League’s Matteo Salvini are willing to take over. Still, no matter who will take the role, the big question remains on the coalition strategy and particularly on potential reforms that could weigh on Eurozone’s spending program and therefore on the euro despite officials denying a proposal of a 250 billion euros debt relief from ECB last week.

Meanwhile in Brussels, Brexit negotiations are resuming this week and investors will be focused to see whether the EU and the UK are able to deliver enough progress, especially on the Irish border puzzle, needed for a productive summit of EU leaders on June 28-29. In case of successful talks in June, optimism that both sides can reach a final agreement in October could increase, months before the UK exits the bloc in March 2019. Inflation hearings report due on Tuesday, UK’s CPI numbers on Wednesday and GDP growth readings on Friday will be also closely watched to indicate whether a rate hike by BoE could come as early as in August.

On the trade front, talks between the US and China will remain in the spotlight although both countries decided to put the trade war on hold after the release of a joint statement on Saturday. On Sunday, the US Secretary Steven Mnuchin said, “Right now, we have agreed to put the tariffs on hold while we execute the framework.”, while China’s foreign ministry spokesman Lu Kang expressed hopes that trade barriers with the US will not re-emerge. However, as long as both countries have not announced any outline on how to solve their disagreement, some risk aversion could remain in the markets.

Besides trade headlines, a number of speeches by Fed members could move the dollar today in the absence of major economic releases. At 1615 GMT, Atlanta Fed President Raphael Bostic (1615 GMT) will be speaking on “Welfare Economics: Trade and a Review of Principles”, while at 1815 GMT Philadelphia Fed President Patrick Harker will be participating in conversation before the Chief Executives Organization’s CEO Financial Seminar 2018. Later at 2230 GMT, FOMC member Neel Kashkari will be making comments as well.