Gold eases on Monday’s session after an aggressive buying interest in the previous day after the rebound on the one-year low of 1211.38. The precious metal dipped below the 40-simple moving average (SMA) in the 4-hour chart pointing to a continuation of the bearish outlook.

From the technical point of view, the Relative Strength Index (RSI) is sloping to the downside, slightly above the threshold of 50, while the %K line dipped below the %D line in the overbought zone, creating a strong bearish case and suggesting further losses.

However, if the market extends gains to the upside, the next level to have in mind is the 1238 resistance barrier, identified by the troughs during July 2018. A jump above this area could drive the price until the 23.6% Fibonacci retracement level of the downleg from 1365 to 1211.38, around 1247.58.

Overall, the precious metal has been holding within a significant downward movement since April 11, indicating that the price remains in a bearish mode in the long term. 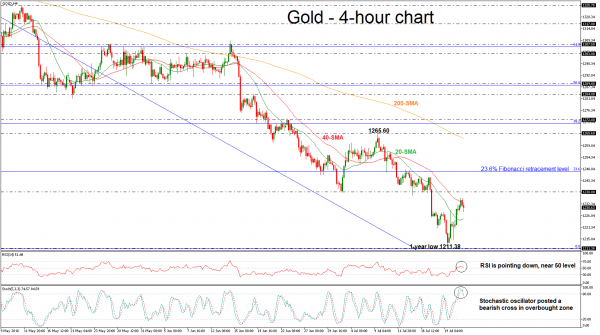