WTI futures resumed neutral mode in the short-term picture following the rebound on the six-week low of 65.70 on Monday’s session. The RSI and the MACD have both improved but remain near their neutral zones; the RSI is currently moving slightly above 50, while the MACD has deviated further above its red signal line but continues to hold below zero.

Should the price shift successfully above the 67.90 resistance level, which overlaps with the 40-simple moving average (SMA) and the 23.6% Fibonacci of the downleg from 75.24 to 65.70 in the 4-hour chart, traders could look for resistance at the 38.2% Fibonacci of 69.33. Moving higher, the next level to have in focus is 69.88 where bulls could push hard to extend the positive bias.

Alternatively, a decline could find support at the 20-SMA, around 67.17, where if the bearish moves appear stronger, the price could hit the 65.70 support. A failure to hold above this level could open the door for the 64.30 hurdle, taken from the low on June 21.

Having a look at the longer timeframe, oil prices have been developing lower since July 3, painting a bearish picture. 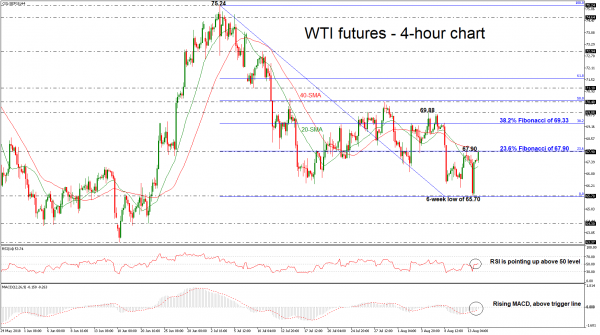 Oil Rallies But Gold Is Directionless