The RSI halted its previous advance and reversed lower into bearish territory below 50. This suggests a tilt in short-term momentum towards a bearish direction. The stochastics are also giving a negative signal in the very short-term, as the %K and %D lines recorded a bearish cross.

Steeper losses may meet support around the 22,000 mark that may hold psychological importance; the area around this captures a couple of bottoms from the recent past as well. Lower, 21,654, this being the 23.6% Fibonacci retracement level of the downleg from 24,472 to 20,789, would be eyed for additional support.

On the upside, resistance could occur around 22,191, the 38.2% Fibonacci point. Higher still, the attention would turn to the zone around the 50% Fibonacci level at 22,628, which also encapsulates the 100-day moving average line, as well as yesterday’s top of 22,579.

The medium-term picture looks predominantly bearish, with trading activity taking below both the 50- and 100-day MAs. Notice though that the two MAs do not maintain a steep negative slope; the outlook is not strongly bearish.

Overall, the short-term bias has tilted to the downside, with the medium-term one looking mostly bearish at the moment. 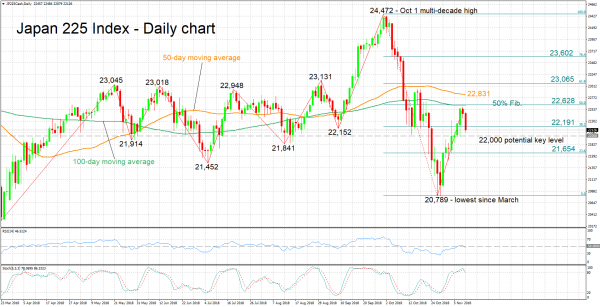