UK 100 stock index (FTSE 100) has declined considerably after touching the four-month high of 7265 on February 15. During Thursday’s trading, the price has gained some ground, while it is currently not far below the 50.0% Fibonacci retracement level of the downleg from 7900 to 6533, near 7220.

The flatly aligned Tenkan- and Kijun-sen lines are indicative of a possible bearish correction, signaling a potentially oversold market. The MACD and the stochastic oscillators are heading south as well.

Should bearish dynamics dominate, the market might revisit the 7060 support, which coincides with the 38.2% Fibonacci, before falling towards the 7000 strong psychological level, taken from the inside swing top on January 21.

If the price manages from more bullish actions and surpasses the four-month high, immediate resistance would come from the 200-day simple moving average (SMA) currently at 7297. Further up, the index could rest around the 61.8% Fibonacci level, around 7380, while a violation of that point may shift the attention to a bullish outlook with the next target being 7560.

Overall, the downfall from 7900 is still active and hence the outlook remains negative despite the short-term upward rally. 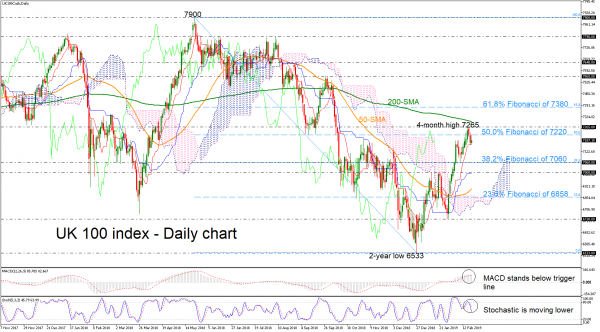