Cable ticks higher in early Friday’s trading after bears faced headwinds at 1.2600 zone (Thu low at 1.2605) awaiting an announcement of PM May about the date of her departure. Thursday’s action ended in long-tailed Doji, signaling that bears might be losing traction, as daily stochastic emerges from oversold territory and end of week profit-taking supports scenario. Strong bearish sentiment on rising Brexit uncertainty leaves little space for recovery and suggests mild adjustment before bears resume. PM May is expected to make her announcement in the mid-morning, but will remain in her position until her successor will be elected. Collapse of her Brexit deal leaves all problems (no deal, new deal, no Brexit) on the table and new leader is expected to push for a more decisive Brexit deal that would likely spark fresh tensions with the EU as the bloc said they are not willing to make changes to the agreement they sealed in November. Upticks were so far capped by initial resistance at 1.2687 (falling 5SMA) ahead of more significant 1.2763 barrier (falling 10SMA) which should ideally cap and guard pivot at 1.2824 (Fibo 38.2% of 1.3179/1.2605 descend). However, strong bullish close today would signal formation of Doji reversal pattern on daily chart that would leave the door open for stronger recovery, with close above 1.2824 needed to confirm scenario. Release of UK retail sales today would further sour the sentiment if data come along with expectations (Apr m/m -0.3% f/c vs 1.1% prev / y/y 4.6% f/c vs 6.7% prev). 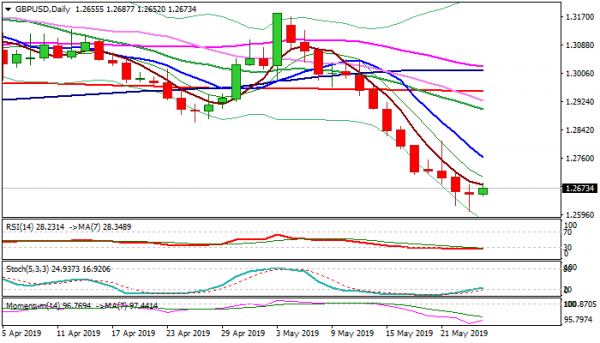