GBPNZD, consumed by a two-month downtrend from a seven-month high of 2.0020, had sellers today grab the reins once again to restart another bearish rally south.

The momentum indicators confirm the persisting down move, with MACD starting to turn down to cross the trigger line, in the negative area, and the RSI agreeing, as it moves south towards the oversold area below 30. The ADX validates that the trend has substantial strength, coupled by the short- and medium-term 21- and 28-day simple moving averages, and further by the chikou span and the moving averages of the ichimoku indicator.

If sellers can keep up the bearish bias, the price will see some immediate friction at the 1.8608 support, which if it gives way, could see a collapse of the price to 1.8380, before a test of the fifteen-month low of 1.8123. A crash through 1.8123 could bring a long-term bearish outlook.

On the other hand, for a shift to the upside, the pair’s current flirt with the five-month low of 1.8685 will have to first conquer the sellers, pushing the price to its initial encounter of the 1.8936 resistance, before ultimately attempting an important test to try to break above the downtrend line, culminating with the two moving averages and a resistance of 1.9073.

In conclusion, the bearish bias in the pair seems to be here to stay for the short- and coming medium-term. 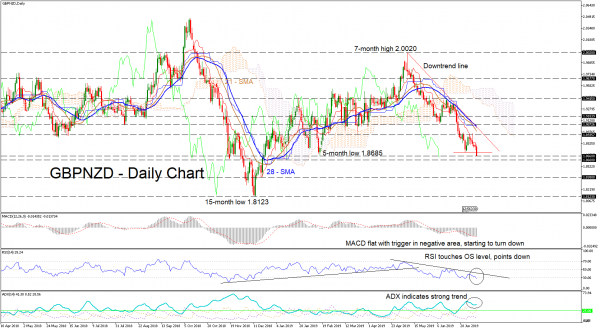