Majors saw very limited action this Thursday, with the EUR/USD pair setting around 1.1150 after peaking at 1.1177 during Asian trading hours. There were no relevant macroeconomic releases but consumer confidence improved in the EU according to June preliminary estimates improved to -1.3 from previous -3.3 and beating expectations of -3.0. In the US, weekly unemployment claims ticked higher, reaching 241K for the week ended June 16th, slightly worse than the 240K expected, while the April Housing Price index advanced 0.7% in the month, unchanged from March’s final reading.

In the news, Fed’s Bullard said that the projected rate path was "unnecessarily aggressive," but also that the Central Bank should begin shrinking its balance sheet "sooner rather than later," hardly a surprise coming from him, while GOP leaders released their Obamacare replacement bill that still needs to pass the Congress and already has opposition among Republicans. Indeed, dark clouds ahead for Mr. Trump, and therefore for the greenback.

In the meantime, the pair continues trading uneventfully near the lower end of its last five-week range, lacking directional strength. Technically, the risk remains towards the downside, although intraday readings maintain a neutral stance, given that in the 4 hours chart, the price is hovering around the 20 and 200 SMAs, both converging around 1.1150, while technical indicators head modestly lower around their mid-lines. There’s a strong support in the 1.1110/20 region, where the pair has relevant lows alongside with the 23.6% retracement of its latest bullish run, with a stronger one at 1.1075. Below this last, the pair has scope to extend its decline towards the 1.1000 critical support. 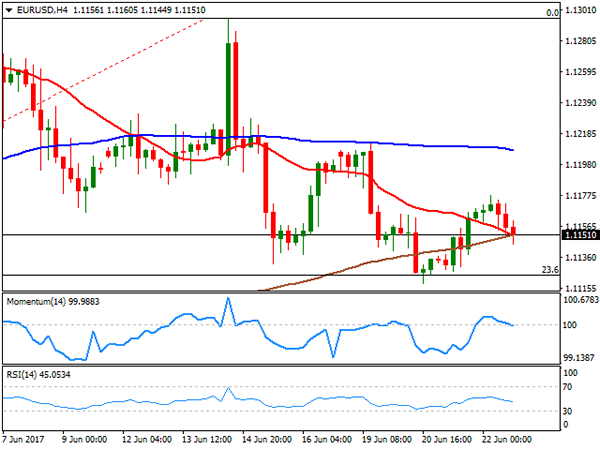 The USD/JPY pair closed flat for a second consecutive day in the 111.30 region, although daily basis, it posted a lower high and a lower low, indicating that the risk remains towards the downside. There were no major news coming from Japan this Thursday, while in the US, slightly weaker-than-expected weekly unemployment claims limit chances of dollar’s gains. Claims in the week ended June 16th came in at 241K from a previously revised 238K. During the upcoming Asian session, Japan will release its June preliminary Nikkei Manufacturing PMI, expected to tick higher from May’s figures. If that’s the case that JPY may get an additional boost. In the meantime and from a technical point of view, the chart shows that the price has been contained below its 100 DMA ever since the week started, but also that the momentum indicator heads higher within positive territory, as the RSI stands flat around its mid-line. In the 4 hours chart the price is stuck around its 200 SMA, while technical indicators remain flat around mid-lines, giving no clear directional clues. 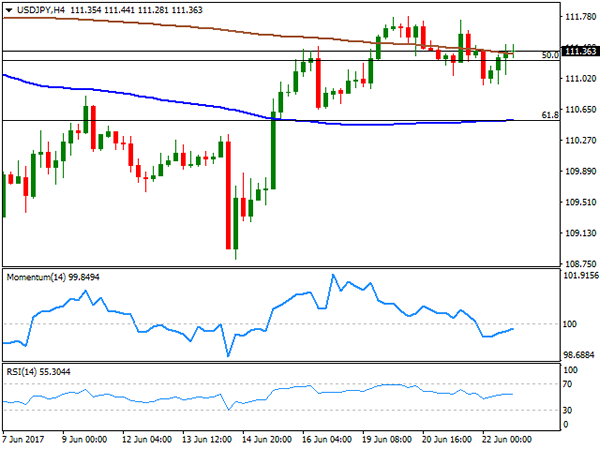 The Sterling lost its upward momentum this Thursday, with the GBP/USD pair ending the day marginally lower in the 1.2660 region, as enthusiasm over a rate hike in the UK triggered by BOE’s Haldane cooled down. PM Theresa May was in Brussels, exposing to EU leaders her plan on EU citizens’ rights in the UK after the split, but EU diplomats clearly rolled the ball saying that negotiations are on to Michel Barnier. In the meantime, May is still struggling to form a government, with the latest news showing that the DUP broke off talks with Theresa May for this week as it told her to spend £2billion in Northern Ireland if she wants the party to prop up her minority Conservative Government. From a technical point of view, the 4 hours chart shows that the pair has been trading below a bearish 20 SMA, unable to extend beyond it, but holding nearby ever since the day started. In the same chart, technical indicators have advanced within negative territory, but pared gains around their mid-lines, not enough to confirm a new leg higher. Nevertheless, a break above 1.2710/20, the immediate resistance, could favor an advance for this Friday. 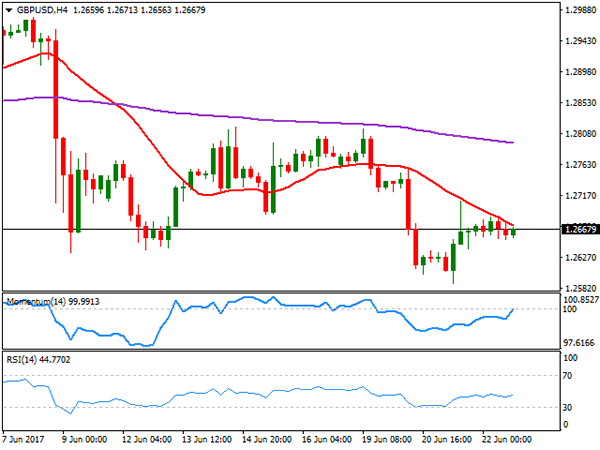 Spot gold advanced at the beginning of the day to trade at $1,254.63 a troy ounce, but trimmed most of its daily gains to settle at 1,249.20. The early advance was supported by broad dollar’s weakness, and easing long-term US Treasury yields that led to the yield-curve to flatten to an almost 10-year low on Wednesday. Also, helping gold were persistent weakness in equities during the Asian and European sessions alongside with political uncertainty. The commodity advanced modestly for a third consecutive day, but the technical picture keeps favoring the downside as in the daily chart, the price was unable to advance beyond a horizontal 100 SMA, while technical indicators continue heading south within bearish territory. In the 4 hours chart, the price has settled above a horizontal 20 SMA while technical indicators have bounced modestly from their mid-lines, but remain below previous daily highs limiting chances of a stronger recovery. 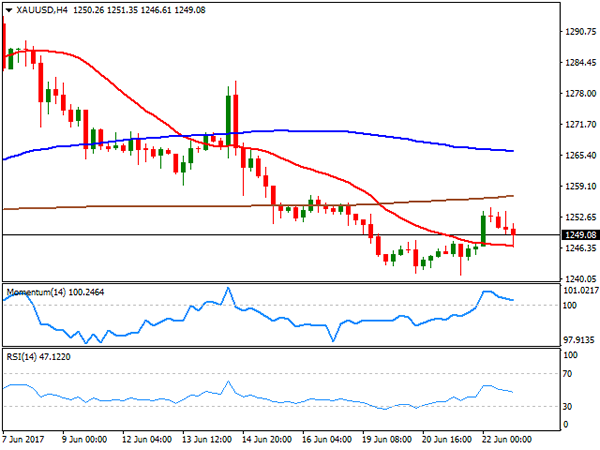 Crude oil prices recovered modestly with West Texas Intermediate crude futures settling 0.5% higher daily basis at $42.70 a barrel. There were no fresh market headlines affecting the commodity, with the movement seem due to traders locking some profits after Wednesday’s sharp slide that led to a fresh 10-month low. The technical picture remains bearish, given that in the daily chart, the price held far below a bearish 20 DMA, while the Momentum indicator keeps heading south within oversold readings as the RSI consolidates around 24. Additionally, the price hovered at the lower half of its previous day’s range. Shorter term, and according to the 4 hours chart, intraday advances met selling interest around a bearish 20 SMA, currently offering a dynamic resistance around 43.35, whilst technical indicators have bounced partially, but remain well below their mid-lines, in line with further declines ahead. 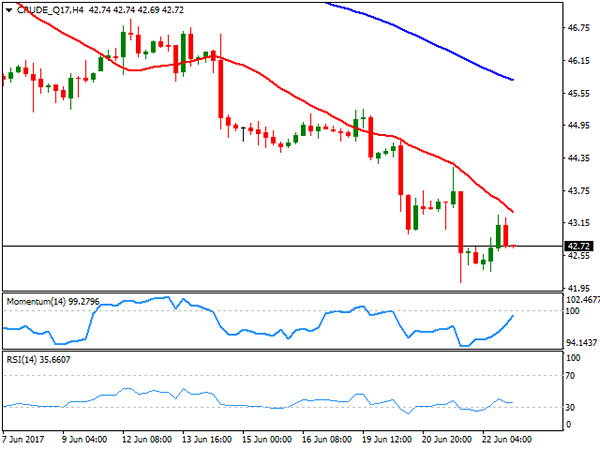 US indexes closed mixed this Thursday, with the DJIA and the S&P down, and the Nasdaq Composite barely up, despite a rally in health care equities following the release of the new US healthcare projected bill, and a bounce in oil prices. The Dow settled 12 points lower at 21,397.29, while the S&P lost 1 point or 0.05%, to 2,434.50. The Nasdaq, on the other hand, gained 2 points to 6,236.69. Republicans presented a 142-page draft of their bill to repeal Obamacare, but still needs to pass the Congress. Within the Dow, Merck & Co. was the best performer, up 0.86%, followed by United Health Group that added 0.85%. Goldman Sachs led decliners with a 1.22% lost. The DJIA trades at the lower end of its weekly range, but the downside potential remains limited, as the index continues trading well above all bullish moving averages, whilst technical indicators pared their previous decline and turned flat well above their mid-lines. In the 4 hours chart, and for the short term, however, the risk is towards the downside given that the index is developing below a horizontal 20 SMA, whilst technical indicators turned south within negative territory. 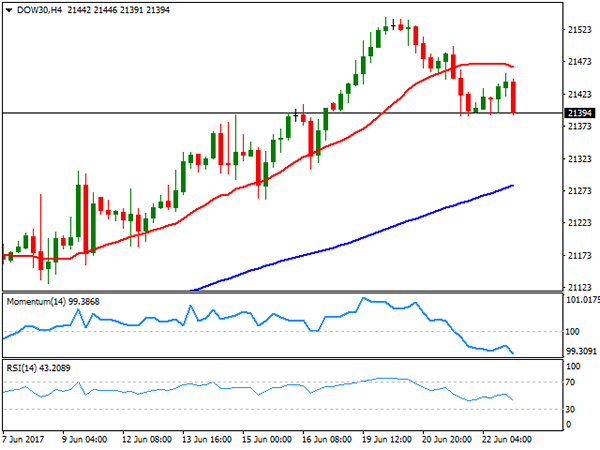 The FTSE 100 closed the day at 7,439.29, down 8 points, but off its daily low as oil´s bounce helped the benchmark trim early losses. Nevertheless, more members closed down, with WM Morrison Supermarkets being the worst performer, down 270%, followed by TUI that shed 2.17%. Shire on the other hand led advancers, adding 3.72%, followed by Provident Financial that added 3.64%. Commodity-related equities managed to recover some ground amid an advance in gold prices, with Randgold Resources up 1.22% and Antofagasta adding 1.18%. Overall, Brexit jitters continued dominating the Pound and the Footsie, with a high degree of political uncertainty keeping investors in cautious mode. The daily chart for the London benchmark shows that the index is down for a third consecutive day, extending below a now bearish 20 DMA, and with technical indicators heading further lower within negative territory, in line with further slides ahead. In the shorter term, and according to the 4 hours chart, the risk is also towards the downside, with the Momentum heading south within negative territory, the RSI indicator turning lower around 40, and the benchmark still developing below its 20 and 100 SMAs. 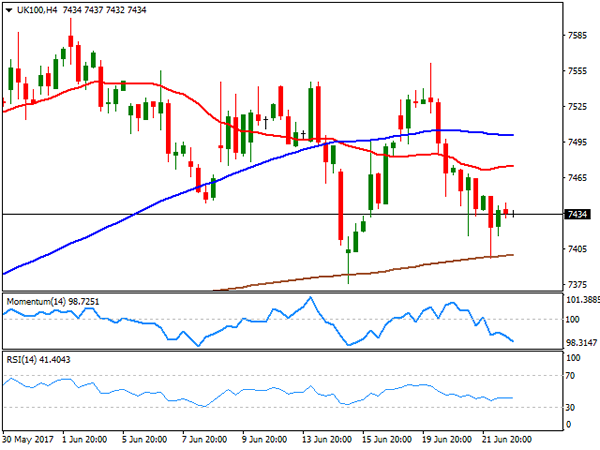 European equities closed mixed, but off their daily lows, with the German DAX managed to add 19 points, to close at 12,794.00, as commodity-related equities pared losses on oil’s shallow bounce, also helped by a recovery in health stocks. ThyssenKrupp extended its bullish run, leading winners’ list for a third consecutive session, up by 4.29%, followed my Merck that added 2.53%. Among the worst performers were Linde, down 1.39% and Heidelberg Cement that shed 0.84%. The daily chart for the index shows that if bounced from a horizontal 20 DMA for a second consecutive day, but remain nearby, while technical indicators keep retreating within positive territory, with limited bearish strength, rather indicating more range trading ahead than suggesting an upcoming downward move. In the 4 hours chart, the index remained contained by selling interest around its 20 SMA, now at 12,805 while technical indicators head south within negative territory, indicating limited buying interest around the benchmark, probably amid increasing political uncertainty. 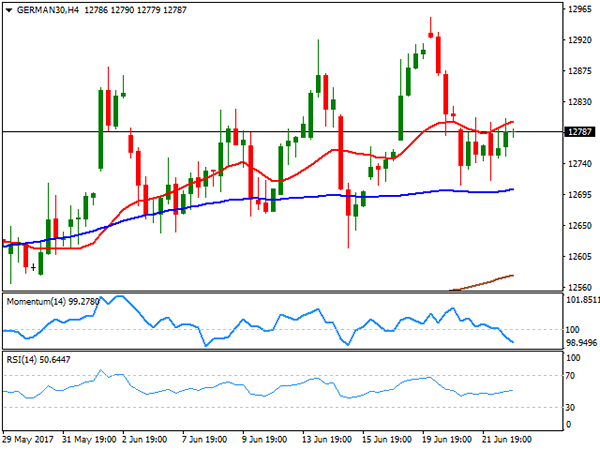