The UK 100 index (Cash) looks to be mostly neutral in the very short-term after an ascent from the March 30 low of 5,294. The short-term oscillators reflect a stall in the positive momentum. The MACD is flattening in the positive area, while the stochastics, which are currently dropping lower are suggesting an overbought market.

If sellers manage to close decisively below the 20-period simple moving average (SMA), the 5,915 support, which overlaps with the 40-period SMA and the lower Bollinger band could deter the price from plummeting to the 5,608 – 5,640 support area. Touching this zone, the market would have penetrated the ascending channel, shifting the medium-term outlook from bullish to neutral.

Otherwise, an initial important resistance region from the upper Bollinger band at 6,095 and the 6,110 barrier could prove difficult to overrun. Conquering this, the seven-week peak of 6,185 could attract attention.

Summarizing, the price is developing within squeezed Bollinger bands, indicating a surprise movement either to the upside or to the downside in the next sessions. 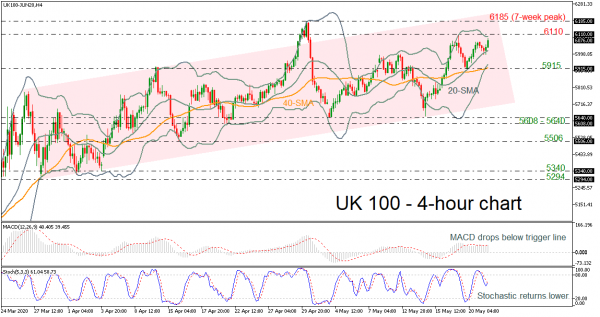