NZDUSD recently overcame negative pressures jumping above the mostly flat 50- and 100-period simple moving averages (SMAs) and the neutral Ichimoku cloud to revisit the roof of the sideways market, which has held for around three weeks. Although currently stalled, this move is also reflected within the bullish Ichimoku lines.

Furthermore, with positive momentum starting to pick up in the technical oscillators, the short-term picture is tilting more towards a positive outcome. The MACD, in the positive area and above its red signal line looks to strengthen further, while the rising RSI appears to be tackling the 70 mark. Moreover, the %K line of the stochastic oscillator also promotes growing positive momentum as it has pivoted back up to fulfil a positive overlap of its %D line. Additionally, a predominant positive charge continues to exist in the 200-period SMA, while the nearing of a bullish crossover of the 100-period SMA by the 50-period one may further boost attempts to climb higher.

Otherwise, if sellers take the reins, immediate support may commence from the red Tenkan-sen line at the 0.6500 mark. Pushing lower, downside limitations could arise around the 0.6454 region, where the 50-, 100-period SMAs, the blue Kijun-sen line and Ichimoku cloud are compressed. Sinking below this toughened border, a crucial support section from the 0.6384 low to the 0.6365 trough – which also encompasses the 200-period SMA – could apply the brakes on the decline. However, if sellers penetrate below, the price may meet the 0.6262 and 0.6220 lows from early June.

Summarizing, the very short-term timeframe is neutral-to-bullish. That said, initial breaks above 0.6536 or below the 0.6365 mark would signal the next unfolding direction. 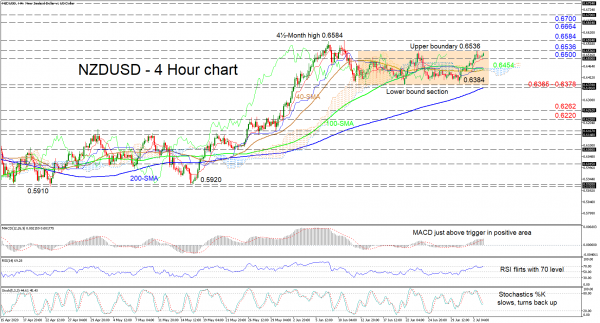