With only one British indicator on the Thursday schedule, the markets will have plenty of time to focus on the Bank of England, which holds its monthly policy meeting. There is little chance that the bank will alter the Official Bank Rate of 0.10% and officials are expected to maintain its bond-buying target (QE) at 745 billion pounds. However, there is pressure on BoE Governor Andrew Bailey to take action, perhaps as early as the third quarter. Possible easing measures include lowering interest rates to zero and raising QE to 845 billion pounds. Investors will be keeping an eye on the BoE’s economic and inflation forecast, which is released every quarter. The bank has projected that the economy will show a v-recovery, but many analysts feel that this scenario is overly optimistic.

Despite a shaky UK economy, the British pound has hammered the US dollar. GBP/USD jumped 5.5% in July, marking the pound’s best month in a decade. The BoE decision should be treated as a market-mover, and the pound will face further tests next week, as the UK releases employment data and GDP for the second quarter. 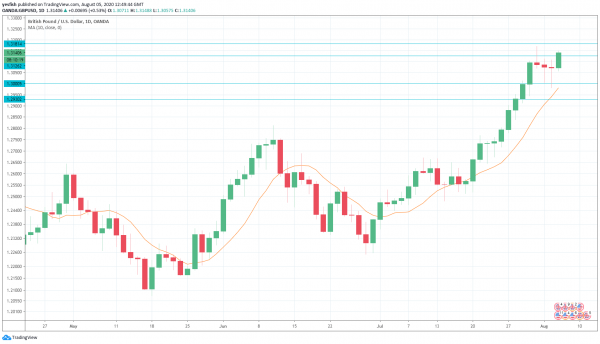 GBP/USD is currently trading at 1.3140, up 0.53% on the day. The pair posted slight gains late in the Asian session and has continued upwards in European trade

EURGBP Plunges in Consolidation Area Below 0.91