AUDUSD is struggling to withdraw under the red Tenkan-sen line at 0.7380, after receding ahead of the critical 25-month peak of 0.7413. Positive momentum seems to be taking a hit, as the red Tenkan-sen line is flattening out. However, the upwards dictating demeanours of the simple moving averages (SMAs) are continuing to defend the bullish structure.

The short-term oscillators are reflecting strengthening negative momentum. The MACD, in the positive region, is zig zagging around its red trigger line, while the RSI, is dipping and heading towards its neutral threshold. Moreover, the negatively charged stochastic oscillator is sponsoring a deeper retracement.

Directing the price downwards, early limitations may develop from the region of 0.7352-0.7363, which also encapsulates the rising blue Kijun-sen line. Diving below this and then conquering the vital section from the 50-period SMA at 0.7333 until the 100-period SMA at 0.7306, surrounding the 0.7324 and 0.7310 respective lows, could shove the price underneath the Ichimoku cloud. Extending the retreat further could then encounter another support band of 0.7254-07264. Extra loss of ground may bring the critical trough of 0.7220 into play before the 200-period SMA at 0.7204 and the 0.7197 barrier beneath, attempt to terminate the move.

Returning higher may see initial tension arise from the resistance ceiling of 0.7407-0.7413, involving the previous multi-month peak. Overcoming this tough boundary, the price may jump towards the 0.7452 and 0.7483 tops, existing over July-August of 2018. Surpassing these borders may then push the price as high as the 0.7513 inside swing low, from June 2018.

Summarizing, AUDUSD maintains its short-term positive bearing above the SMAs and the 0.7220 mark. Nonetheless, an initial hold above 0.7352-0.7363 could boost the price over the resisting ceiling. 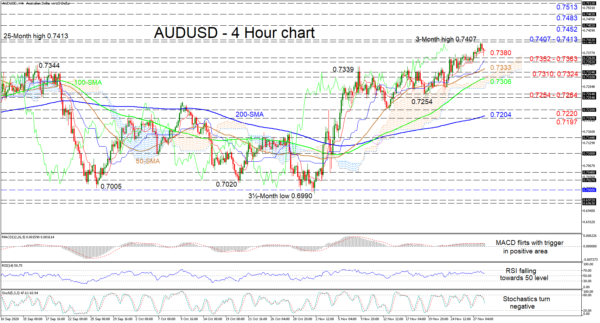