AUDUSD, having surpassed September’s top, is trading at the highest price since August 2018 and above all its simple moving averages (SMAs), giving a new impetus to its March uptrend.

The RSI has also stretched to a fresh peak in the bullish territory and has yet to enter the overbought zone, while the MACD seems to be regaining strength above its red signal line after flattening a bit, both pointing to more progress in the short run. Note that the momentum indicators are in a positive mood in the four-hour and weekly timeframes as well.

Another encouraging sign is the rising red Tenkan-sen line, which has been navigating the price comfortably above the blue Kijun-sen line. Should it hold firm around 0.7344, the price may advance towards the 0.7500 as there is no key obstacle in sight below that level. Crawling higher, the rally may take a rest around the 0.7600 round number before accelerating towards the 0.7700 – 0.7760 resistance region.

In the event the 0.7344 resistance-turned-support level collapses, the pair may pull into the 0.7240 – 0.7200 restrictive area, which includes the 50-day SMA and the upper surface of the Ichimoku cloud. Slightly beneath that, the 0.7140 hurdle may attempt to prevent a test at the 0.7000 base, a break of which would put the pair back on a bearish path.

Looking at the bigger picture, the market seems to have completed a three-step corrective move (a-c) and is set to develop another bullish five-wave pattern (i-v) according to the Elliot theory.

Summarizing, AUDUSD continues to give the green light to positive actions, with the spotlight turning to the 0.7500 number. 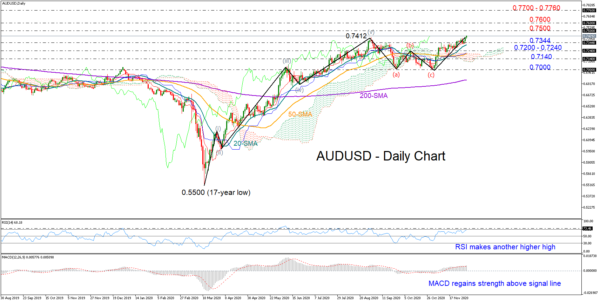