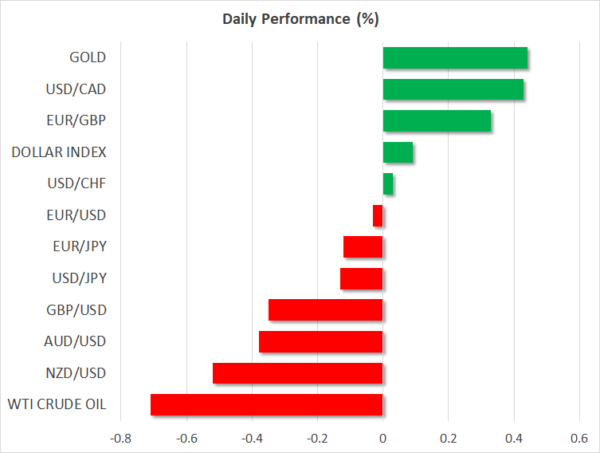 As most major economies struggle under the weight of the pandemic, China is demonstrating to the world that a full recovery from the virus slump is possible. China’s gross domestic product (GDP) rose by an annual rate of 6.5% in the final quarter of 2020, helping it avoid a full-year contraction to instead grow by 2.3%. Chinese stocks ended the day higher following the impressive figures but shares in the rest of Asia were only modestly able to pare their losses as concerns persist about the growing number of lockdowns around the world as well as the slow rollout of vaccines in many countries.

Tokyo’s Nikkei 225 index closed down by nearly 1% and European and US stock futures were also in the red following poor retail sales numbers out of the United States on Friday. Retail sales in America fell for the third consecutive month in December, underlining the growing health crisis in the country, which has not only led to tighter restrictions but is taking a toll on the labour market.

It wasn’t all bad news on Friday, however, as US industrial output increased more than expected in December, rounding up a strong quarter for the sector. Nevertheless, with a long way to go before mass immunization programmes start to take effect and virus curbs can be lifted, positive sentiment was in short supply at the beginning of the trading week.

Risks attached to vaccine rollouts and US stimulus

The UK and US are currently leading the global vaccination effort among the big nations but given that the initial dose of optimism has already been baked into the markets, investors will probably want to see a significant drop in virus cases before going on another buying spree. The US stimulus rally also appears to have run its course for now and markets may be entering a consolidation phase as a number of risks lie ahead.

One of the key tests in the coming weeks and months will be whether or not all countries, particularly Europe, will be able to get up to speed with the vaccination drive and how soon will the shutdowns end for good. Another challenge for the risk rally will be getting Biden’s stimulus proposal through Congress as the Democrats’ slim majority in the Senate might make it difficult for the plan to pass in its current form.

In the more immediate term, the threat of more violence and unrest at Biden’s inauguration ceremony on Wednesday is likely to keep investors on edge.

The cautious sentiment is likely to stretch at least into tomorrow as US markets are closed today for Martin Luther King Day. There aren’t many European drivers that can brighten up the mood either as Italian political tensions are flaring up again. Italian Prime Minister Giuseppe Conte is facing two votes of confidence: one in the lower house today, and one in the Senate tomorrow. It comes after a junior coalition partner quit the government. Even if Conte were to survive both votes, the risk of a general election would remain high as staying in government without a majority might prove to be an impossible task.

The euro stayed on the backfoot on Monday, slipping to a near 6-week low of $1.2063 as Italian government bond yields remained elevated. Beyond Italian politics, traders will be looking to Thursday’s European Central Bank meeting for clues as to whether more monetary stimulus is on the cards in the coming months.

Sterling also edged lower as it’s becoming increasingly likely that the UK will not be able to come out of lockdown until at least March. The risk-sensitive Australian and New Zealand dollars were the worst performers though, falling by about 0.5% each.

Meanwhile, the safe-haven US dollar and yen rose across the board, with the dollar index hitting a 4-week high. Even gold managed to turn positive, having briefly brushed a 1½-month low earlier in the day, to bounce up to above $1830/oz, as the risk-off tone more than offset the heavy weight of the stronger greenback.