EURGBP is consolidating, creeping along the somewhat softened downward slope of the 50-period simple moving average (SMA) around 0.8641. The directionless Ichimoku lines have neared each other and are currently reflecting feeble directional momentum. Despite recent improvements off a foothold at a 1-year low level of 0.8538, the SMAs continue to defend the bearish bias, which began around the end of last year.

The short-term oscillators are suggesting directional momentum has relatively dried up but are leaning more towards the downside. The MACD is holding between the hovering red trigger line – barely in the positive section – and the zero threshold, while the tipping RSI is piercing below the 50 neutral level. Furthermore, the stochastic oscillator has turned negative, promoting additional bearish price action.

If sellers manage to dive the price back beneath the 50-period SMA at 0.8641, initial downwards hindrance could develop from the 0.8619 and 0.8596 nearby lows respectively. However, dipping back below the cloud may guide the price to challenge the support base from 0.8557 to the 1-year bottom of 0.8538. Should selling interest persist, the adjacent zone of 0.8503-0.8520 could be next to attempt to limit the restarted bearish bias from reaching the 0.8434 barrier, identified in February 2020.

Otherwise, if the pair gains traction off the 50-period SMA and pushes over the 0.8667 obstacle, first upside limitations could arise from the 100-period SMA overhead at 0.8684. Improving further, the forthcoming resistance section of 0.8713-0.8737 may test buyers’ efforts to strengthen the positive outlook, with a stretch exceeding the 200-period SMA at 0.8763 and the 0.8791 high.

Summarizing, EURGBP retains a neutral-to-bearish demeanour and a break either above 0.8791 or below 0.8538 could direct the price on its next course. 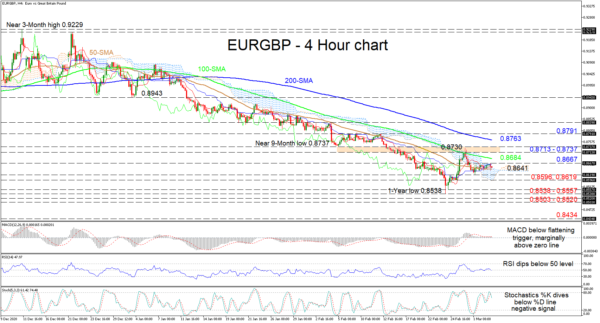