AUDUSD opened Thursday’s session on a positive note, aiming to repeat Thursday’s rally, which cracked the ceiling around 0.7274.

The price has already recovered half of November’s sell-off to trade at a 2-month high, with the momentum indicators hinting at additional gains as the RSI has bounced back above its 50 neutral level to mark fresh highs. Likewise, the MACD jumped to the highest level since November, while the rising Stochastics are still some distance below their 80 overbought number, signaling that there is more room for improvement in the market.

Further up, the pair could challenge the 61.8% Fibonacci retracement of the 0.7554 – 0.6992 downturn at 0.7376. The 200-day simple moving average (SMA) overhead at 0.7422 and marginally below the 78.6% Fibonacci could be a tougher obstacle given the strong rejection from the line at the end of October. Should the bulls claim that prize, buying pressures could accelerate towards the 3½ -month high of 0.7554 from October 28. Any step higher from here would upgrade the medium-term picture from neutral to bullish, bringing the 0.7640 resistance area next into view.

On the flip side, a drop below 0.7274 and back into the Ichimoku cloud could initially stabilize around the 20- and 50-day SMAs, which are currently overlapping with the 38.2% Fibonacci of 0.7207. Falling lower, the pair may test the 23.6% Fibonacci of 0.726 before meeting the 0.7280 support region. If the latter fails to cease selling pressures, the door will open for the 0.6992 bottom.

In brief, the latest upturn in AUDUSD switched the bias from neutral to bullish in the short-term picture, clearing the way towards the 0.7376 – 0.7422 key resistance territory. In the medium-term window, the bulls will need to run beyond 0.7554 to adjust the neutral outlook. 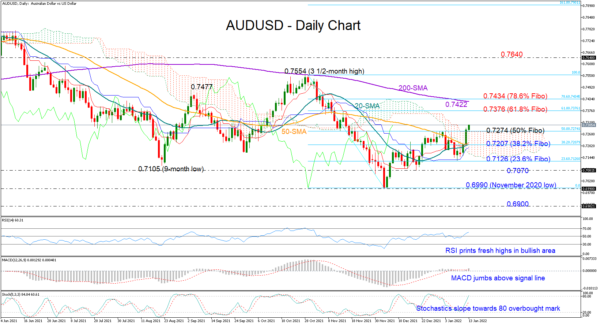