GBPUSD has gained more than 10% over the last six days, continuing the bounce off the record low of 1.0325.

Technical oscillators reflect the recent bullish bias as the pair is advancing above the 20-day simple moving average (SMA). Both the MACD and the RSI are rising with strong momentum, indicating more bullish actions.

The 1.1410 level could challenge any bullish attempts made prior to the 50-day SMA at 1.1660. Consequently, a breakout at this point may attract additional attention, as the price approaches the 1.1750 resistance, which is located near the long-term descending trend line.

Alternatively, a further decline would reinforce the longer-term case for a market in a downtrend, perhaps triggering a new negative wave towards the all-time low of 1.0325. Failure to maintain above this floor could result in a further decline towards the following psychological thresholds, such as 1.0300 and 1.0200.

Although the upward movement has shifted the bias to somewhat optimistic in the very short-term, the longer-term perspective remains highly bearish, and only a break above the downtrend line may change this. 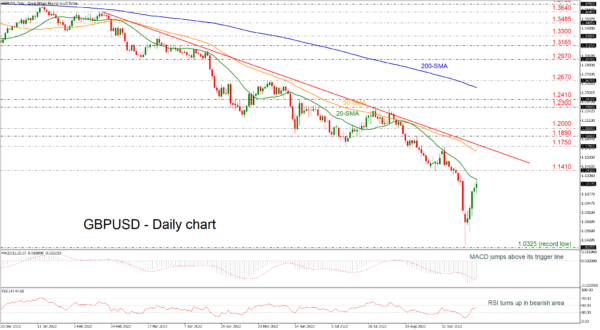