USDCAD has been in an uptrend since March, storming to a fresh 30-month high of 1.3976 before experiencing a downside correction. Even though the pair erased part of its recent pullback, it has been rangebound in the last few daily sessions, with the 50-day simple moving average (SMA) capping its downside.

The momentum indicators currently suggest that bullish forces are intensifying. Specifically, the stochastic oscillator is ascending after posting a bullish cross, while the MACD histogram is strengthening above both zero and its red signal line.

Should bullish forces persist, the price could edge higher to test the recent resistance region of 1.3699. Piercing through this zone, the spotlight could then turn to the 1.3850 barrier registered in October. An upside violation might then set the stage for the 30-month high of 1.3976.

Alternatively, if bearish forces regain control and push the price below the 50-day SMA, immediate support could be met at the recent low of 1.3517. Sliding beneath that floor, the bears could aim for 1.3384 before the 1.3315 hurdle appears on the radar. Failing to halt there, further declines may cease at the November low of 1.3225.

Overall, USDCAD is lacking a clear direction in the short-term picture after its rebound failed to strengthen. Therefore, a break above or below its recent range could be followed by a significant move towards the same direction. 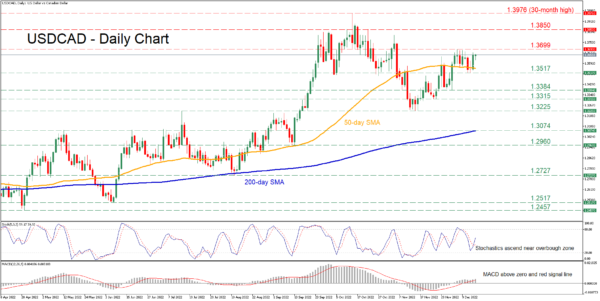