EURJPY had been on a steady short-term recovery before experiencing a massive decline on the back of the BoJ’s latest decision to widen the band of its Yield Curve Control policy. For now, the retreat has come to a halt at the crucial 200-day simple moving average (SMA, but downside pressures persist.

The momentum indicators currently suggest that bearish forces are strengthening. Specifically, the MACD histogram has retreated below both zero and its red signal line, while the stochastic oscillator is descending steeply near the 20-ovesold zone.

If the decline resumes, initial support could be met at the 200-day SMA, currently at 146.10. Diving beneath that region, the price could descend towards the September low of 137.30 before 135.50 comes under examination. Failing to halt there, further declines could cease at the August bottom of 133.40.

On the flipside, should the pair correct higher and erase part of its downward spike, the 142.54 support could now act as resistance. A violation of that zone could shift the attention to 146.12 before the bulls aim at the 147.75 barrier. Jumping above the latter, the pair may then challenge the eight-year high of 148.39.

In brief, EURJPY declined significantly on the aftermath of the BoJ’s latest policy decision but found support at the 200-day SMA. Hence, if the crucial floor holds its ground, the pair is likely to exhibit an upside correction. 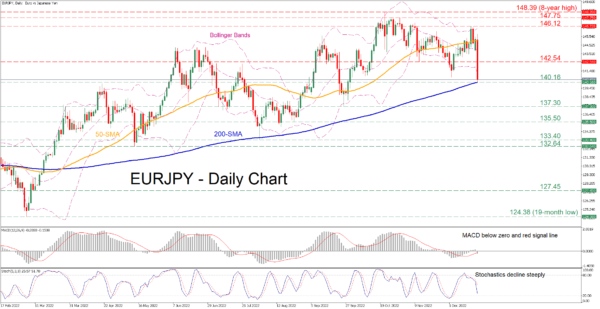