Stocks markets took a breather last week while focus turned to surging industrial metal prices and treasury yields. Strength in metals was seen more about supply shortage than recovery in demand. That somewhat also reinforced reflation trades. US 10-year yield was back above 1.3%, German 10-year bund yield at -0.3%, UK 10-year gilt yield at 0.7%, and Japan 10-year JGB yield was at 0.1%. These benchmark yields are either already back at pre-pandemic levels, or closing in to.

In the currency markets, strong metal prices boosted Australian Dollar to be the best performer, followed by Sterling and then other commodity currencies. On the other hand, Swiss Franc and Yen ended as the worst performing ones. Dollar and Euro were also weak, just slightly better than Swissy and Yen.

Copper futures’s up trend was in steep acceleration mode last week and closed above 4.0 a pound handle for the first time since 2011. It has already made an impressive gain of 15% year-to-date, with half of the gains achieved over the past week alone. It’s not the only industrial metal that surged. Nickel was up 17.3% YTD to 7-year high while tin was up 24% YTD to a decade high.

Some pointed to global recovery and strong growth in China as a facto in driving up industrial metals, it’s believed that the problem lies more on the supply side, due to pandemic restrictions. Reduced production in Peru was a much quoted factor for copper’s rally. Citigroup estimated a global copper deficit at around 500k tonnes starting this year. There were talks that the market won’t likely have enough copper to meet demand in the years to come.

A near term retreat in copper could happen any time due to overbought conditions. Yet, we believe that, based on current momentum, there won’t be any sizeable correction until at least a test on 2011 high at 4.6495.

Canadian underperformed while Aussie is likely to stay strong

Comparing the biggest winners over the week, Canadian Dollar has somewhat underperformed. While WTI crude oil surged to 62.23, it has apparently topped for the short term with break of 59.34 support, just head of 100% projection of 47.24 to 53.92 from 51.58 at 62.38. Pull back in oil prices could keep Canadian soft against Aussie and Sterling for the near term. 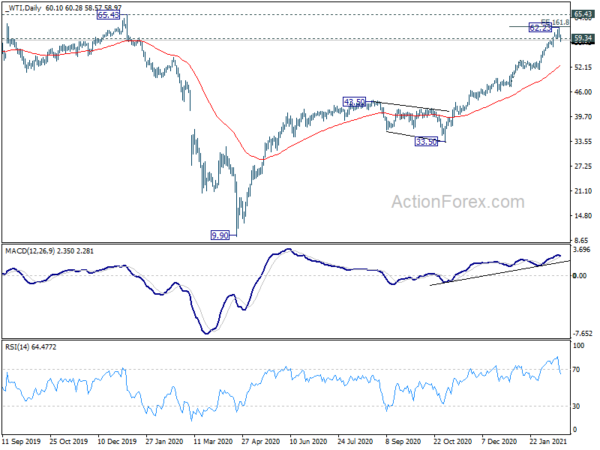 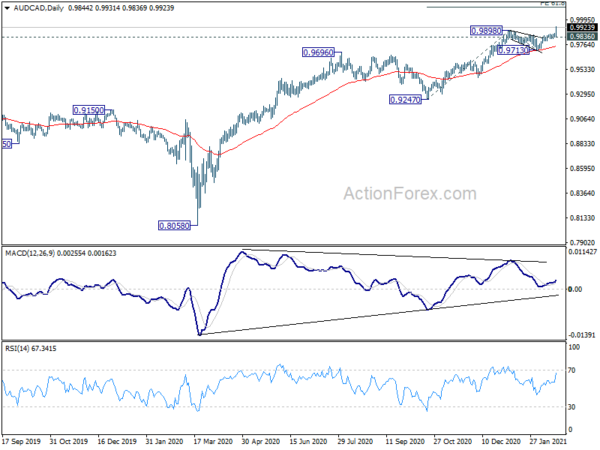 GBP/CAD’s break of 1.7674 resistance last week argues that it’s finally breaking out of sideway consolidation pattern that started from 1.8052. Further rise is now in favor as long as 1.7581 support holds, for a test on 1.8052 in the near term. 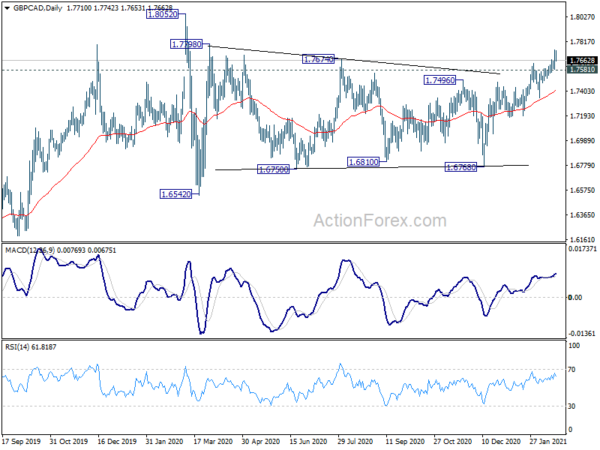 Though, that would also depend on Sterling’s development elsewhere. GBP/AUD was apparently rejected by 1.8020 resistance last week. Immediate focus would be back on 1.7787 support this week. Break there should confirm completion of the rebound form 1.7412 and bring retest of this low. Such development might cap the Pound’s upside elsewhere. But in either case, we’d likely see Aussie staying generally firm. 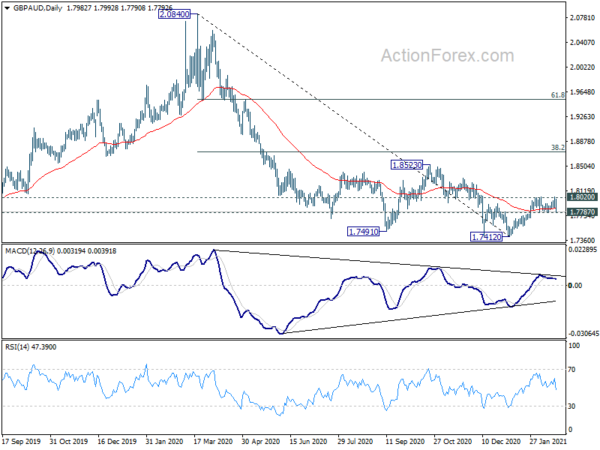 The picture at the other end of the table is a bit tricky. CHF/JPY resumed recent up trend last week, and surged to as high as 118.84. But it failed to sustain above 118.59 key resistance (2017 high) and closed the week with slight loss. Some deeper retreat is likely for the near term. 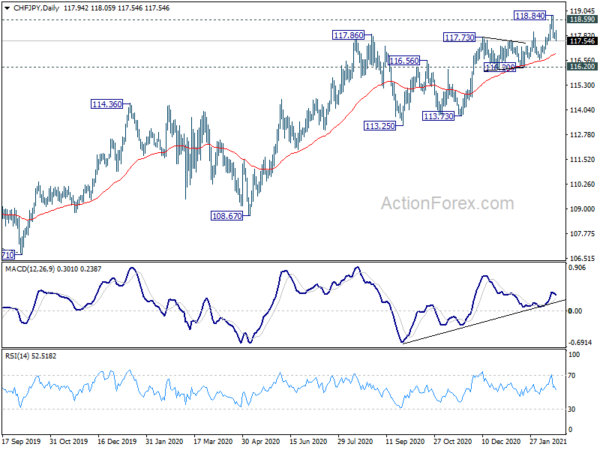 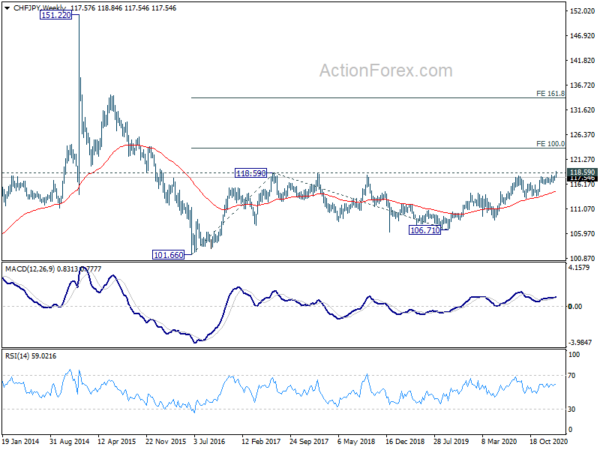 As for Dollar index, near term outlook is relatively neutral. There was no downside acceleration after rejection by 91.74 resistance earlier this month. Last week’s recovery was limited by 55 day EMA. Overall, the price actions from 91.60 looks more like a second leg of the pattern from 89.20 than an impulsive move for down trend resumption. Hence, range trading is likely the way to go for the near term. That could translate into indecisive actions between Euro and Dollar for the near term. 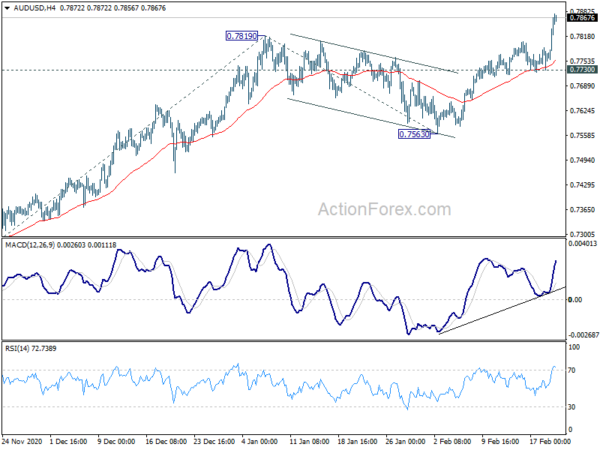 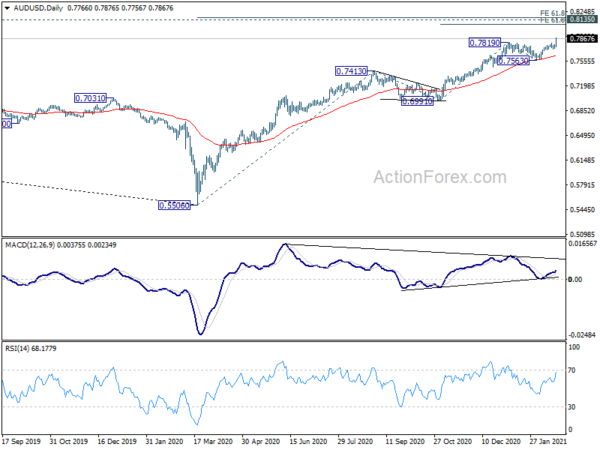 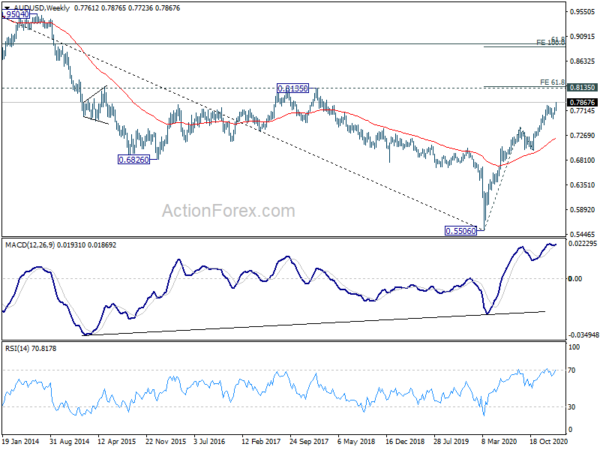 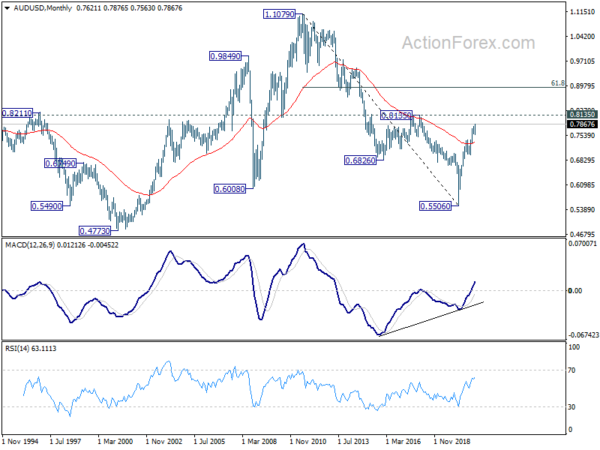