UK PMI Construction improved to 45.3 in November, up from 44.2 and beat expectation of 44.5. Markit said that output fell in all three broad categories of construction. There was sharp drop in new work. Also, staffing levels decreased for the eighth month in a row. 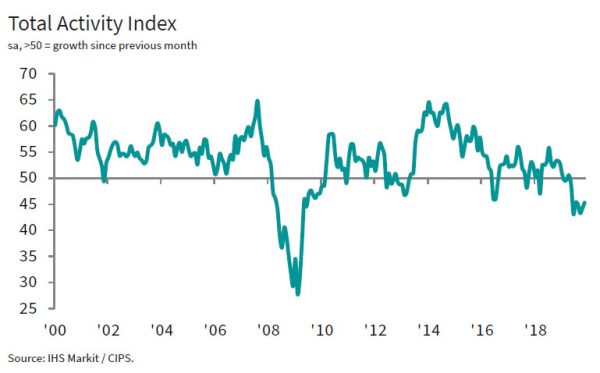 “UK construction output fell again in November as Brexit uncertainty and the forthcoming General Election continued to send a chill breeze across the sector. The speed of the downturn in construction work eased a little since October, but the survey continues to signal a notable drop-off in business conditions compared with the first half of 2019.

“Greater hesitancy among clients led to a decline in overall new work for the eighth consecutive month during November. Construction companies reported a particularly sharp fall in demand for commercial projects amid a greater squeeze from domestic political uncertainty and delayed investment decisions.

“House building has been the most resilient category of construction output in 2019. However, it remains a concern that overall volumes of residential building work have dropped in each month since June, which is the longest phase of decline since the start of 2013.

“Greater spending on transportation and energy projects had been expected to help boost infrastructure work this year and next, but survey respondents indicated a sustained soft patch for overall civil engineering activity in November. Some construction companies reaffirmed their concern about the delivery of road and rail projects, with delays to contract awards acting as an additional headwind to growth projections for 2020.”