Pompeo said China’s plan on the national security legislation was “only the latest in a series of actions that fundamentally undermine Hong Kong’s autonomy and freedoms… No reasonable person can assert today that Hong Kong maintains a high degree of autonomy from China, given facts on the ground. He certified to the Congress that Hong Kong no longer warrants treatment under U.S. laws “in the same manner as U.S. laws were applied to Hong Kong before July 1997.” “It is now clear that China is modeling Hong Kong after itself,” he added.

Separately, US also requested an emergency UN meeting over issue. Washington’s UN mission staid in a statement, that China’s proposal will “fundamentally undermine Hong Kong’s high degree of autonomy and freedoms as guaranteed under the Sino-British Joint Declaration of 1984, which was registered with the UN as a legally binding treaty… This is a matter of urgent global concern that implicates international peace and security.” However, it said that China has “refused to allow this virtual meeting to proceed”. “This is another example of the Chinese Communist Party’s fear of transparency and international accountability for its actions,” the US statement said.

China’s ambassador to the UN Zhang Jun just tweeted “Legislation on national security for Hong Kong is purely China’s internal affairs. It has nothing to do with the mandate of the Security Council.”

Hong Kong HSI is currently down around -1.6% but it’s holding above this week’s low at 22519 so far. Technically, corrective rebound from 21139.26 should have completed at 24855.47 after rejection by 55 day EMA, and further decline is expected to retest this low. Nevertheless, break of 22519 support needs to happen first. 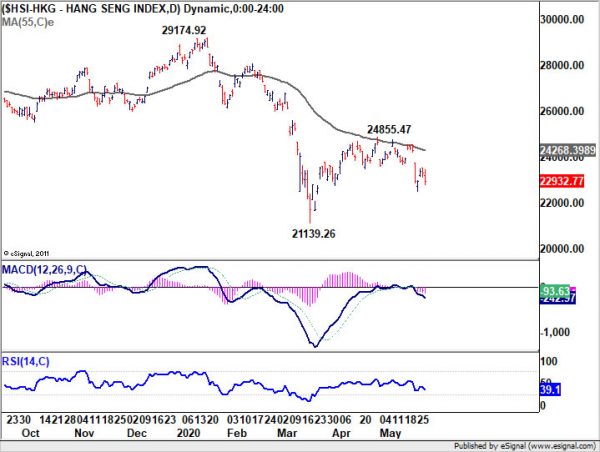 USD/CNH breached 7.1953 resistance to 7.1961, but there was no follow through buying there. We’d maintain that 7.1953 should provide technical resistance to limit upside, and bring another fall to extend the consolidation pattern. However, sustained trading above 7.1953 will indicate serious deterioration in US-China tension, which could prompt rather sharp selloff in Yuan to extend medium term up trend in USD/CNH. 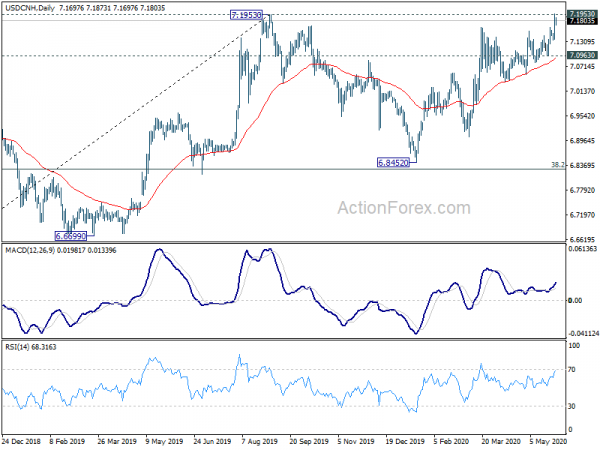