UK PMI Construction rose further to 58.1 in July, up from 55.3, beat expectation of 57.0. That’s the second straight month of expansion reading, and the best since October 2015. Markit said growth was led by sharp increase in house building. There was modest improvement in new order books. However, employment fell at a faster pace. 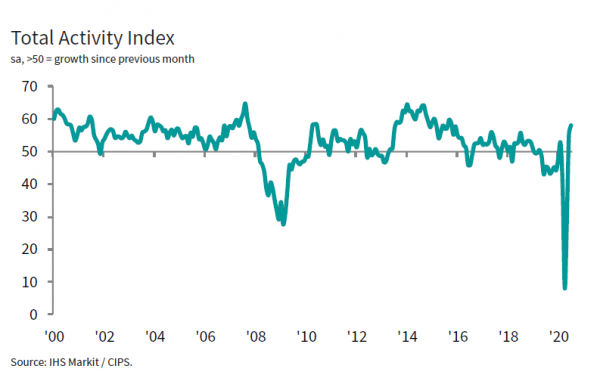 Tim Moore, Economics Director at IHS Markit: “Survey respondents noted a boost to sales from easing lockdown measures across the UK economy and reduced anxiety about starting new projects. However, new work was still relatively thin on the ground, especially outside of residential work, with order book growth much weaker than the rebound in construction output volumes.

“Concerns about the pipeline of new work across the construction sector and intense pressure on margins go a long way to explain the sharp and accelerated fall in employment numbers reported during July. This shortfall of demand was mirrored by the fastest rise in sub-contractor availability since November 2010 and another decline in hourly rates charged.”

BoE Bailey: No judgement on whether to use negative interest rates yet

Is The Stock Two-Day Risk Rally Running Out Of Steam?