UK PMI construction rose to 54.6 in Oct, worst supply crunch may have passed

UK PMI Construction rose to 54.6 in October, up from 52.6, slightly above expectation of 54.0. Construction recovery accelerated from September’s eight-month low. House building regained its place as the best-performing category. But severe shortages of staff and materials continued.

“UK construction companies achieved a faster expansion of output volumes in October, despite headwinds from severe supply constraints and escalating costs…. “However, the volatile price and supply environment added to business uncertainty and continued to impede contract negotiations… There were widespread reports that shortages of materials and staff had disrupted work on site, while rising fuel and energy prices added to pressure on costs.

“Nonetheless, the worst phase of the supply crunch may have passed, as the number of construction firms citing supplier delays fell to 54% in October, down from 63% in September. Similarly, reports of rising purchasing costs continued to recede from the record highs seen this summer.” 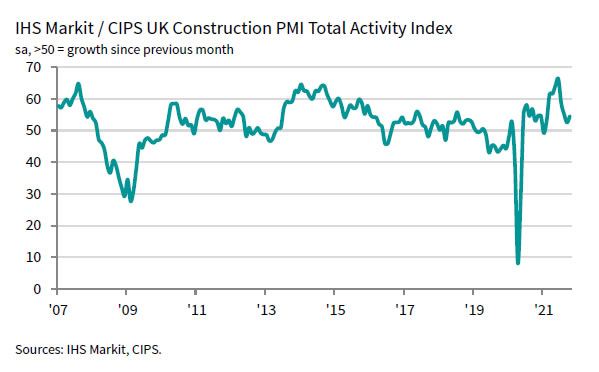