Action Forex
HomeLive CommentsGermany PMI manufacturing dropped to 52 in Jun, services down to 52.4

Germany PMI manufacturing dropped to 52 in Jun, services down to 52.4

“June’s flash PMI data show that Germany’s economy has lost virtually all the momentum gained from the easing of virus related restrictions, with growth in the service sector cooling sharply for the second month in a row in June.

“But perhaps the biggest cause for concern is a broad-based decline in demand, with a deepening downturn in manufacturing new orders coinciding with a first fall in service sector new business for six months, as rising prices and elevated levels of uncertainty take a toll. Activity is still being supported to some extent by workloads built up earlier in the year, however.

“Price pressures remain historically elevated. However, there are signs that businesses might be finding it increasingly difficult to pass on higher costs to customers, with average prices charged for goods and services rising at the slowest rate for three months despite a quicker increase in input costs that the survey in part linked to rising wage pressures.

“Thanks to a particularly grim outlook for the manufacturing sector, business confidence towards future activity is now at its lowest since the first wave of the pandemic two years ago, and we’re seeing this translate into a broad-based slowdown in job creation as companies start to reassess their staffing needs going forward.” 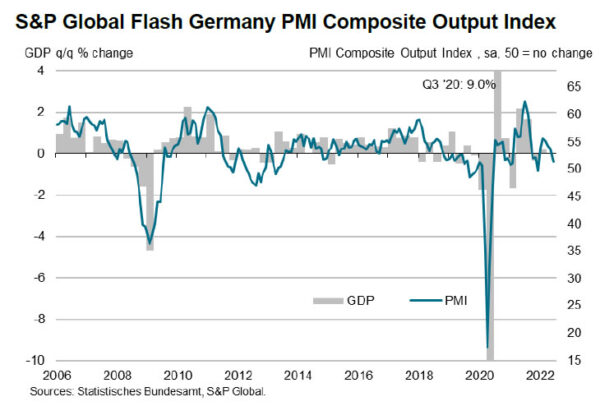