At the BOC meeting next week, we expect Governor Stephen Poloz to reinstate the stance that the next policy rate move would be data-dependent. The latest inflation report surprised to the upside. Yet, the central bank would likely look through it as other data continued to show decelerating growth momentum. BOC would leave the policy unchanged at 1.75%.

Headline CPI rose to +1.9% y/y in March, in line with consensus and improving from February’s +1.5%. Core inflation picked up to +1.6%, from +1.5% in February. Two of BOC’s three preferred gauges of inflation showed significant recovery. Median CPI climbed higher to +2% in March, from the upwardly revised +1.9% in the prior month. Trimmed CPI rose to +2.1% from the upwardly revised +2% in February. Common CPI steadied at +1.8%. The loonie rebounded after the data. The upside surprises have temporarily freed the central bank to cut interest rate. 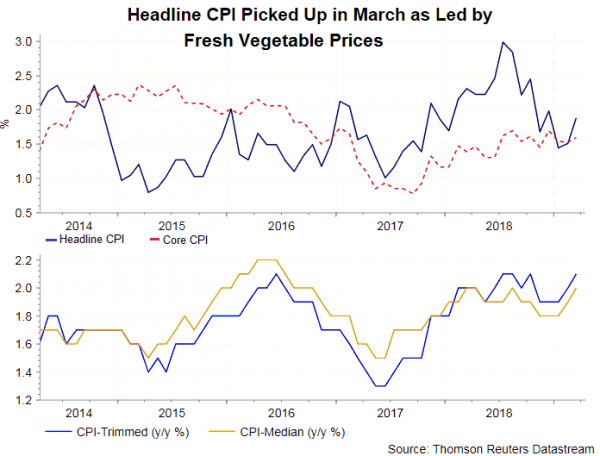 However, the overall development in the country has been mixed at best. Released earlier this month, the unemployment rate stayed unchanged at 5.8% in March. The number of payrolls dropped -7.2K, missing consensus of a +1K addition. Employment grew +55.9K in February. On a positive note, average hourly wage rose +2.32% y/y, accelerating from February’s +2.25%. Separately, BOC’s Business Outlook Survey (BOS) disappointed with the overall business index falling to -0.6% in 1Q19, from +2.2% previously. As suggested in the accompanying report, the result pointed to “a moderation from previously high levels of domestic and foreign demand for firms in most regions”. Yet, it also noted that “investment and employment intentions remain positive”. On the housing market, housing starts increased to an annualized rate of 192.5K in March, from 166.3K in the prior month. This has, however, missed expectations of 196.5K. Meanwhile, the report by Canada’s real estate association (CREA) shows that home sales plunged -9.1% m/m to the 7.5-year low in February. 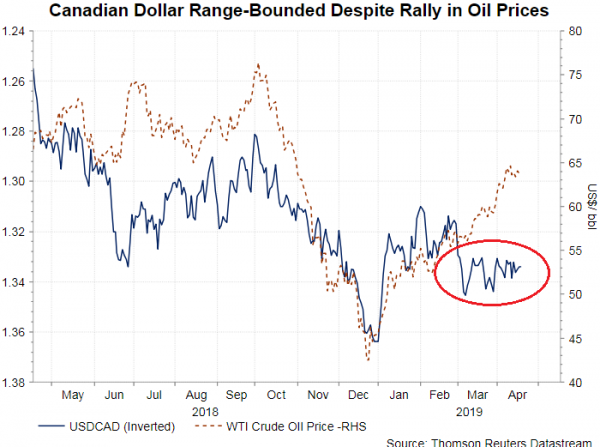 At the March BOC meeting, Poloz turned dovish by stripping off the forward guidance that the next move would be a rate hike. Moreover, the central bank acknowledged a “more pronounced and widespread” global economic slowdown. It also noted that “trade tensions and uncertainty are weighing heavily on confidence and economic activity” and “global economic prospects would be buoyed by the resolution of trade conflicts”. At a speech two weeks ago Poloz signaled that he has abandoned the bias for a rate hike. He reinforced that future rate decision would be “very data dependent” as “that number is going to change every time something hits the economy, whether it’s a positive thing or a negative thing”. We believe he would reiterate such stance at the upcoming meeting.