We expect RBNZ to cut the OCR, by -25 bps, to 1.25% in August. Given the disappointment in the inter-meeting data flow, the central bank would likely signal further easing later in the year. Meanwhile, the policy statement might focus on the downside risks on domestic economic growth outlook, shifting from the focus on global economic uncertainty in June. 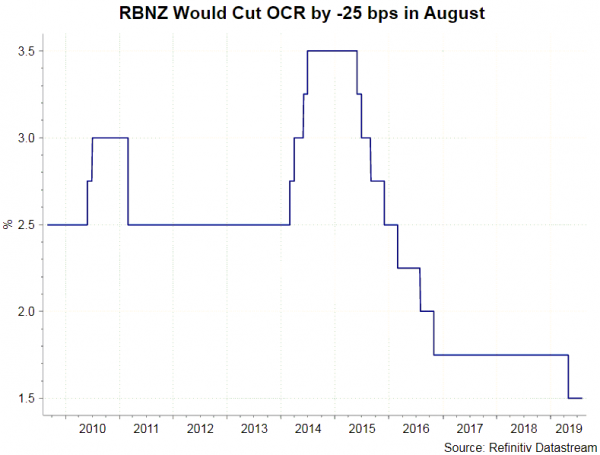 GDP growth for 2Q19 could surprise to the downside. ANZ’s business outlook survey shows weak business confidence in the country. Headline business confidence fell -6 points to net -44% in July. Firms’ expectations of business activity dropped -3 points to +5%, the lowest since August 2018. As noted in the report, the capacity utilization index “has one of the most reliable correlations” to annual GDP growth. The reading declined -5 points to 0, its lowest read since 2009. As suggested in monthly economic indicators report by the Treasury Department, “weak domestic business confidence and global concerns weigh on GDP growth prospects”, although “household confidence remains resilient, supporting consumption outlook”. On the general price level, “fuel, food and rent drive consumer price inflation”. Globally, “ongoing trade uncertainty weighed on global business activity the June quarter”.

There are signs that the job market is weakening. Unemployment rate in 2Q19 might have climbed slightly higher to 4.3%, up from 4.2% in the prior month. However, the number of payrolls probably gained +0.3%, following a -0.2% decline in the first quarter. Recall that in 1Q19, employment growth came in weaker than expected. The drop in the unemployment rate (to 4.2%) was driven by the decline in the participation rate to 70.4%. Meanwhile, private sector wage growth, at +0.3% q/q, remained soft and missed consensus. 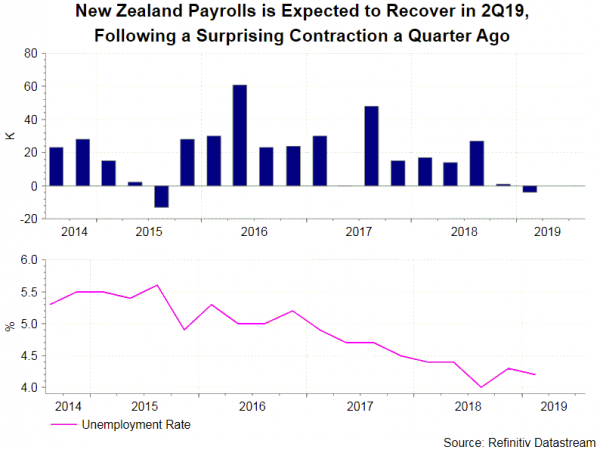 On inflation, headline CPI improved further to 1.7% y/y in June, Yet, this remained below RBNZ’s target range of 1-3% (midpoint at 2%). It seems that price level would struggle to reach the midpoint in coming months. The ANZ World Commodity Price Index dropped -1.4% m/m in July, as driven by weakness in forestry and dairy prices. The strength of the New Zealand dollar in July led the NZD-denominated to fall by -2.8% m/m. The decline in the forestry price index (by -8%) was due to slowdown in demand from China. Although demand from China is seasonally weaker during hot weather, the weakness this time was also driven by uncertainty of the US- China trade war. Dairy prices dropped -1.6% in July, while whole milk powder prices are stable. ANZ forecast it to be “supported in the year ahead by relatively tight supply”.

It is likely that RBNZ would revise lower its interest rate forecast for for this year. At the policy statement it could reiterate the reference that “a lower OCR may be needed over time”  in response to the “downside risks around the employment and inflation outlook”.

NZD/USD Is Likely To Face Resistance Near 0.6000