China announced that 16 types of US exports will be exempted from tariff. While this may be a gesture ahead of the October trade negotiation, we view this as a sign of further weakness in china’s economic outlook. Trade data surprised to the downside in August with both exports and imports coming in weaker than expected. Despite a low base effect, China’s exports contracted -1% y/y in August, after growing +3.3% a month ago. Predominantly, exports to the US contracted -8.9%. Worse still, imports contracted -4.6% y/y, of which imports from the US sank -27.5%. Trade surplus narrowed to US$ 34.8B, from US$ 44.6B a month ago.

Ahead of major data flow in the coming week, inflation report released earlier this week fails to send a more positive signal. Headline CPI remained strong. Yet, it only reflects high food prices, instead of underlying momentum of consumption. Headline CPI steadied at +2.8% y/y in August, close to PBOC’s target of +3%. On a monthly basis, the reading slowed to +2.9%, from +3.5% in July. Food price accelerated to +10% y/y in August, from +9.1% a month ago. Again, the strength was mainly driven by pork price which soared +46.7% y/y. Price for fresh vegetables contracted -0.8% y/y, compared with +5.2% in July. Fruit price jumped +24.0% y/y, easing from +39.1% in July. Excluding food and energy, core inflation moderated to +1.5% in August. Deepening to deflation, PPI contracted -0.8% y/y in August, mainly driven by weakness in ferrous metals and petroleum prices. 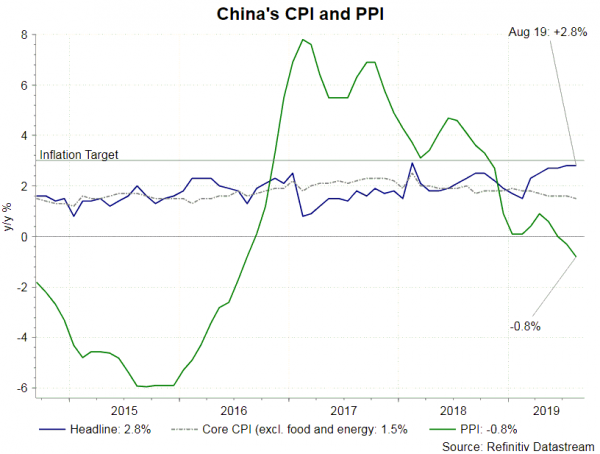 Monetary policy outlook will remain expansionary. PBOC will cut RRR, by -50 bps, for financial institutions (excluding finance companies, financial leasing companies and auto finance companies), effective September 16. Additionally, RRR for city commercial banks will be lowered further, by -50 bps from October 15, and then by -50 bps on November 15. This is expected to unleash a total of RMB 900B to the market. Given the downside risk of China’s economic outlook and ongoing uncertainty of US-China trade war, we expect further monetary easing to come by the end of the year. The next move can come in as soon as next week. It is likely PBOC will guide interest rates lower when the next round of medium-term lending facility (MLF) is launched on September 17. This would come just ahead of FOMC’s meeting, at which the policy rate will likely be lowered by another -25 bps Moreover, we expect one more RRR cut of -50 bpd by year-end.

Besides conventional monetary policy tool, China also allows renminbi depreciation in order to stimulate exports. FX reserve climbed slightly (+RMB 3.3 billion) to RMB 3.11 trillion in August. While there is little sign of intervention, increase in FX reserve amidst renminbi’s selloff in August (down 3.78% against USD) is a sign that the authority is comfortable with the depreciation.