Losing -1.8% month-to-date, CNY has erased much of the gain made against USD since the beginning of the year. While the broadly based USD rally after the June FOMC meeting is the major driver, PBOC’s intervention has also prevented the renminbi from having meaningful gains. In April and May, CNY appreciated about +2.8% against USD. During the period, the CFET renminbi index gained +1.1%, suggesting that renminbi’s strength was not only due to USD’s weakness. Indeed, FX inflow and strong international trade data in China were also key reasons lifting CNY. 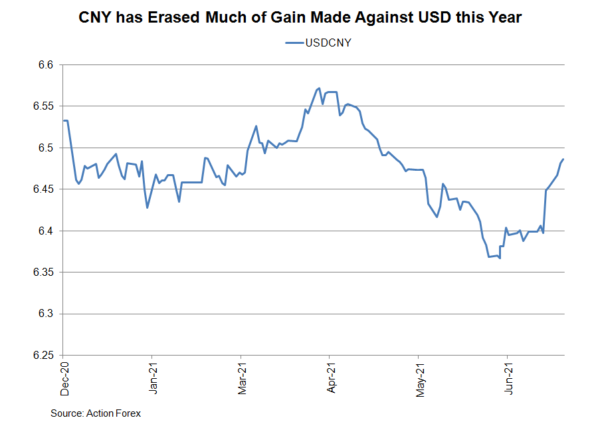 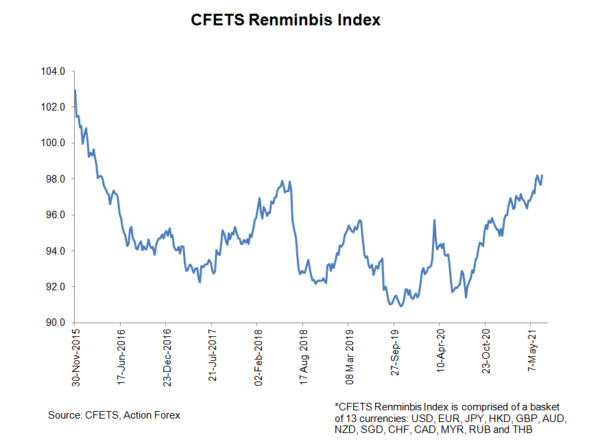 Yet, the Chinese authority has gotten more uncomfortable and has been adopting subtle ways of curbing the currency strength. Towards the end of May, People’s Bank of China (PBOC) announced to increase of FX deposit reserve requirement ratio (RRR) to 7% from the current 5%, effective June 15. The 2-ppt increase in RRR would withdraw about US$13B of FX liquidity in the market. Lower FX liquidity, relative to that of CNY, should alleviate appreciation pressures of the latter. Besides, the government has also encouraged capital outflow to offset inflow. Earlier this month, the State Administration of Foreign Exchange (SAFE) announced an increase of US$10.3B in the QDII quota for 17 domestic financial institutions, including funds, securities firms, banks and insurers, through which they can purchase foreign shares. Since the program began in 2006, the SAFE has approved QDII quota applications from 173 institutions totaling US$147.32B.

China’s FX reserve rose to US$ 3.22 trillion in May, highest since January 2016. The government increased its FX reserve in April and May, after allowing to fall in the first quarter of the year. We believe this is also related to renminbi strength, as buying foreign assets (and simultaneously selling renminbi) would help weakening renminbi. 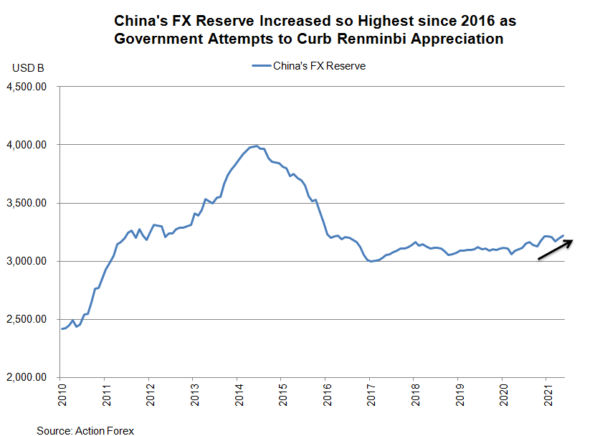 Although the recent rally in US dollar suggests that the authority could take a break in its intervention, it would be vigilant in CNY movement. The latest economic data indicated that China’s recovery has lost momentum. A strong currency that affects exports is not something the authority wants to see.