Australian dollar opens the week higher as lifted by stronger than expected retail sales today. That’s followed by Euro as the second strongest as European political risks receded. As sentiments improved, Yen stays soft against all others, followed by the Swiss Franc. While trade tensions occupy a lot of headlines, the impact on the markets is pretty muted.

In the Chair’s summary of the two days meeting of the G7 finance ministers and central bank governor’s over the weekend, it’s written that there was unanimous concern over recent trade actions of the US. The statement said that “concerns were expressed that the tariffs imposed by the United States on its friends and allies, on the grounds of national security, undermine open trade and confidence in the global economy.” And, “Finance Ministers and Central Bank Governors requested that the United States Secretary of the Treasury communicate their unanimous concern and disappointment.”

Also, there was exchanges on the benefits of an open rules-based trading system. At the same time “many highlighted the negative impact of unilateral trade actions by the United States”. And the finance ministers and central bank governors urged to continue the discussion at the “leaders’ Summit in Charlevoix, where decisive action is needed”, “to restore collaborative partnerships to promote free, fair, predictable and mutually beneficial trade.” It also noted that “members continue to make progress on behalf of our citizens, but recognize that this collaboration and cooperation has been put at risk by trade actions against other members.”

Canadian PM Trudeau: Idea of Canada being security threat to US is insulting and unacceptable

Canadian Prime Minister Justin Trudeau said in a TV that “the idea that we are somehow a national security threat to the United States is quite frankly insulting and unacceptable.” He added that “the idea that the Canadian steel that’s in military, military vehicles in the United States, the Canadian aluminum that makes your, your fighter jets is somehow now a threat?” And, “our soldiers who had fought and died together on the beaches of World War II… and the mountains of Afghanistan, and have stood shoulder to shoulder in some of the most difficult places in the world, that are always there for each other, somehow — this is insulting to them.”

China: All agreed in trade talks won’t take effect if US imposes sanctions and tariffs

Chinese Vice Premier Liu He and US Secretary of Commerce Wilbur Ross met in Beijing on June 2-3, as follow up to the trade negotiations in Washington back in May. After the meeting, China issued a statement through its state news agency Xinhua. In the statement, it’s noted that “to implement the consensus reached in Washington, the two sides have had good communication in various areas such as agriculture and energy, and have made positive and concrete progress while relevant details are yet to be confirmed by both sides”. And China reiterated its “consistent” stance that “reform and opening-up as well as expanding domestic demand are China’s national strategies. Our set pace will not change.”  But it also warned that “all economic and trade outcomes of the talks will not take effect if the US side imposes any trade sanctions including raising tariffs.”

The European Commission lodged a complaint to the WTO against China last week over its breach of patent rights of European companies. That came along side EC’s complaint against US steel and aluminum tariffs. Chinese Ministry of Commerce responded to the complaint over the weekend, saying that it regrets the complaint and said it will handle it through WTO dispute settlement. At this same time the MOFCOM said “The Chinese government has always attached great importance to the protection of intellectual property rights and adopted many powerful measures to protect the legitimate rights and interests of domestic and foreign intellectual property rights holders. The achievements have been obvious to all. In terms of intellectual property cooperation, China and the EU have established a working group mechanism for intellectual property rights. Through this mechanism, China and the EU have maintained effective communication and achieved positive results in many areas.”

Iran urged JCPOA signatories to stand up to US bullying

Iranian Foreign Minister Mohammad Javad Zarif called on his counterparts to save the JCPOA Iran nuclear deal in letter that’s partly published by the state news agency IRNA. Zarif emphasized that the deal was the result of “meticulous, sensitive and balanced multilateral talks” and could not be renegotiated as the US requested. And, he urged the remaining signatories, France, Germany, Britain, Russia and China to stand up to US “illegal withdrawal” and its “bullying methods to bring other governments in line”.

Retail sales rose 0.4% mom in April versus expectation of 0.3% mom, and prior month’s 0.0%. The Australian Bureau of Statistics noted that cafes, restaurants and takeaways led the rise assisted by an unusually warm April. But there were likely negative impacts for some businesses in “clothing, footwear and personal accessories and department stores.” Company gross operating profits rose 5.9% qoq, 5.8% yoy seasonally adjusted in Q1. Wage growth was slow at 0.8% qoq seasonally adjusted and 5.1% yoy. TD securities inflation gauge, however, was flat 0.0% mom in May versus expectation of 0.3% mom and prior month’s 0.5% mom.

Australia, Canada and UK data to watch this week

Looking ahead, it’s a big week for Australia. RBA rate decision will be watched closely but it’s unlikely to change it’s neutral stance. GDP and trade balance will also be released while China trade balance will be featured. Canada is another focus with trade balance, Ivey PMI and employment featured. Meanwhile, Sterling trades, as well as BoE policy makers will look at construction and services PMIs to gauge the strength of rebound in the economy. Here are some highlights for the week ahead: 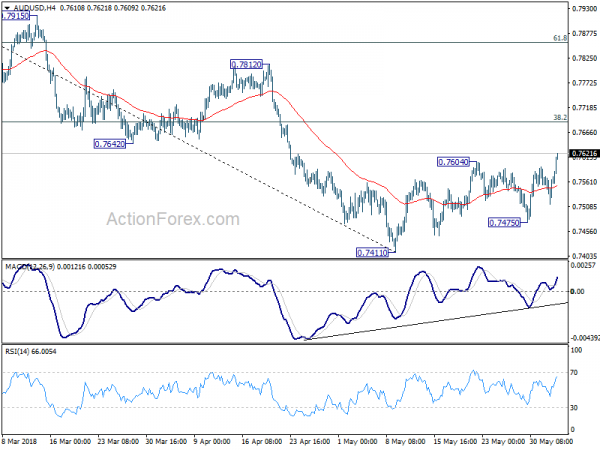 In the bigger picture, medium term rebound from 0.6826 is seen as a corrective move. Prior break of 0.7500 key support suggests that such correction is completed at 0.8135. Deeper decline would be seen back to retest 0.6826 low. In case of another rise, we’d expect strong resistance from 38.2% retracement of 1.1079 to 0.6826 at 0.8451 to limit upside to bring long term down trend resumption eventually. 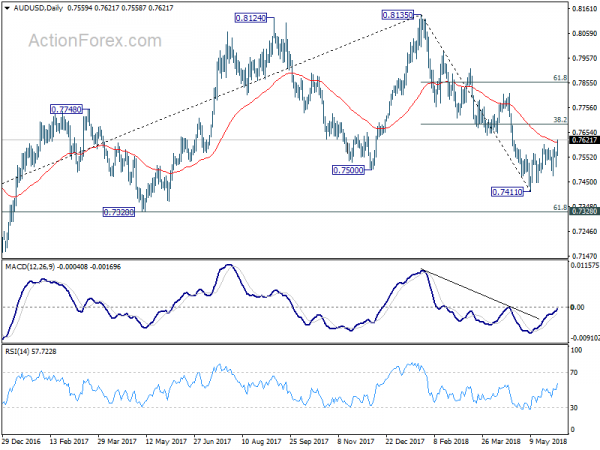