Dollar Under Broad Based Pressure as Correction Extends, Aussie Hold Gains ahead of RBA

Australian Dollar remains the strongest one today as helped by strong risk appetite. At the time of writing, TSE is trading up 0.55%, DAX up 0.25% and CAC Is up 0.33%. US futures also point to another day of rally. New Zealand Dollar follows as the second strongest. Meanwhile, Euro is the third strongest on easing worries over Italy. Dollar, on the other hand, is trading as the weakest one, followed by Japanese Yen.

Technically, despite AUD/USD’s strong rebound today, rise from 0.7411 is still seen as a corrective move. 0.7688 would be an important near term fibonacci resistance to overcome. RBA rate decision and statement tomorrow would be an important event for the Aussie. But firstly, no one is expecting a chance in interest rate. And secondly, it’s unlikely for RBA to chance its neutral, wait-and-see stance. Hence, Wednesday’s GDP report could be the one that decides whether AUD/USD could get past the mentioned 0.7688 level.

Markets continued to stabilize further as Italian political turmoil is now a past. Italian 10 year bond yield dropped for another day, by 0.17 so far and is standing at 2.54. German 10 year bund yield, on the other hand, is rising 0.16 and is back above 0.40 at the time of writing. While the spread is still widener than 200, it’s much better than the worse day when it was over 300.

Money markets are back pricing in the chance of an ECB hike next year. This is additionally supported by the stronger than expected inflation reading released last week. Now, markets are pricing in around 50% chance of a hike in June 2019. They are also now fully pricing in a 10 bps hike by September 2019.

Salvini to EU: Italy can’t be a refugee camp

Just days after its formation, the new Italian eurosceptic government is starting the clash with EU. Interior Minister Matteo Salvini, head of the right-wing League and a deputy prime minister too, declared that the “party is over” for migrants. Salvini said in a radio interview that Italy “can’t be transformed into a refugee camp”. And he added that it’s “clear and obvious that Italy has been abandoned” by the EU. Later Salvini tweeted that “either Europe gives us a hand in making our country secure, or we will choose other methods.”

Eurozone Sentix Investor confidence dropped sharply to 9.3 in June, down from 19.2 and well below expectation of 18.6. And, for the fifth time in a row, overall index for Germany dropped to its lowest level since July 2016. Expectation “collapsed” to -13.3, hitting the lowest level since August 2012.

In the release, Sentix noted that “it appears that investors still hope that the world’s trade dispute with the US will not get out of control. But, they are “far less lenient with developments within the euro zone.” It also pointed out that “the new government in Rome is very sceptical. This is so strong that economic expectations in the euro zone are downright tilting.”

UK PMI construction unchanged at 52.5, recovery could be short-lived

UK PMI construction was unchanged at 52.5 in May, above expectation of 52.0. Sam Teague, Economist at IHS Markit noted that “activity in May was once again buoyed by some firms still catching up from disruptions caused by the unusually poor weather conditions in March”. And, a”a renewed drop in new work hinted that the recovery could prove short-lived.”

Retail sales rose 0.4% mom in April versus expectation of 0.3% mom, and prior month’s 0.0%. The Australian Bureau of Statistics noted that cafes, restaurants and takeaways led the rise assisted by an unusually warm April. But there were likely negative impacts for some businesses in “clothing, footwear and personal accessories and department stores.” Company gross operating profits rose 5.9% qoq, 5.8% yoy seasonally adjusted in Q1. Wage growth was slow at 0.8% qoq seasonally adjusted and 5.1% yoy. TD securities inflation gauge, however, was flat 0.0% mom in May versus expectation of 0.3% mom and prior month’s 0.5% mom. 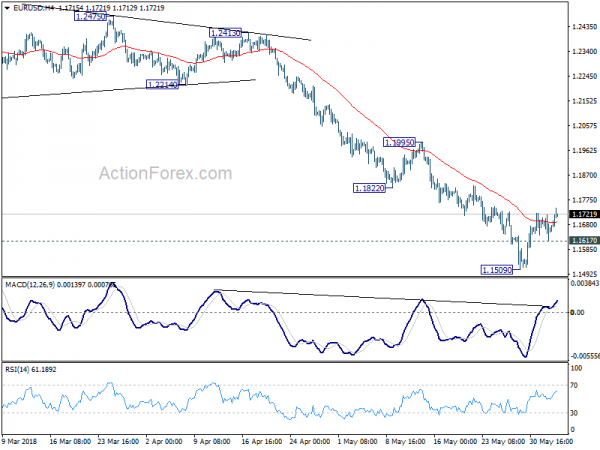 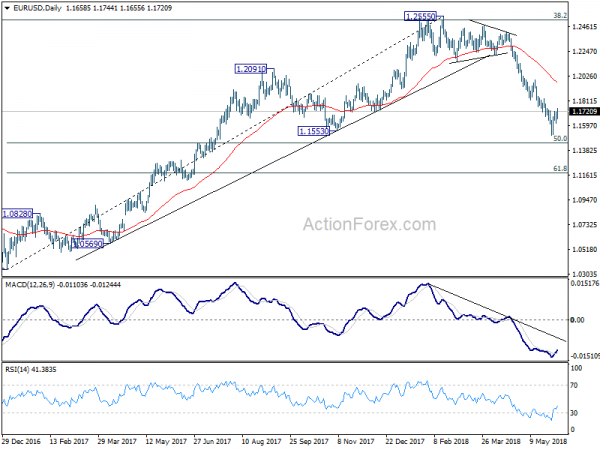