Yen and Swiss Franc continue to dominate the market on risk aversion as trade tensions escalate. The US markets didn’t perform too badly indeed. DOW closed just down -103.01 pts or -0.41% overnight at 24987.47. S&P was down -5.91 pts or -0.21%. NASDAQ even managed to gain 0.65 pts or 0.01%. Nonetheless, Asian markets are trading in deep red, with Nikkei losing -1.46% at the time of writing. Hong Kong HSI is down -2.18%. Australian, New Zealand and Canadian Dollar are the biggest casualties under current market sentiment while Dollar also loses some ground.

Trump ordered US Trade Representative to identify USD 200B worth of Chinese products for additional 10% tariffs. It noted in the statement that “the initial tariffs that the President asked us to put in place were proportionate and responsive to forced technology transfer and intellectual property theft by the Chinese. It is very unfortunate that instead of eliminating these unfair trading practices China said that it intends to impose unjustified tariffs targeting U.S. workers, farmers, ranchers, and businesses. At the President’s direction, USTR is preparing the proposed tariffs to offset China’s action.”

The Chinese Ministry of Commerce vowed to fight back with “qualitative” and “quantitative” for any additional tariffs. The MOFCOM condemned to initiative of imposing extra tariffs on USD 200B of Chinese goods. It said in a statement today that “Such a practice of extreme pressure and blackmailing deviates from the consensus reached by both sides on multiple occasions, and is a disappointment for the international community.” And, “the United States has initiated a trade war and violated market regulations, and is harming the interests of not just the people of China and the U.S., but of the world.”

US farmer group to launch TV ads against trade war

Trump’s protectionist trade policy are causing a lot of concerns from US farmers. The steel and aluminum tariffs on Mexico have already triggered retaliation on US agriculture products. The trade war with China is even a bigger concern. Brian Kuehl, executive director of Farmers for Free Trade, said “the reason you are seeing people increase the pressure now is because the pressure is increasing on them. Now the impact is really starting to hit. It is not something you can just take lightly.”

The group issued a statement last week in response to the section 301 tariffs on China. There it noted imposing tariffs on China is “no longer a negotiating tactic” and it’s a “tax” on farmers livelihoods. It’s “downright scary”. And the group criticized that the tariffs is a “win for our competitors”, including South Maerica and Australia. The group called for elected officials to stop this trade war.

The group will also launch a TV ads on Tuesday in Pennsylvania and Michigan urging Trump to stop trade war.

Atlanta Fed President Raphael Bostic delivered a speech titled “The Path to Economic Resilience” to the Rotary Club os Savannah yesterday. There he expressed his support further further rate hike as the economy “appears to be in a pretty good place”. His growth outlook “hasn’t changed materially” since the start of the year and output is expected to growth at a “moderately above-trend pace this year and next”, then slow to slightly less than 2%. Regarding inflation, Bostic said he hasn’t seen a “dramatic shift” in inflation expectation or measured retail price inflation yet. And aggregate wage growth “appears to have flattened out” over the past year to a level that’s inline with fundamentals.

Bostic is comfortable to “move policy toward a more neutral stance”, where it’s “neither accommodative nor restrictive”. While neutral rate is “something we know with precision”, he believed Fed is getting close to the “lower part of most plausible estimates of the neutral rate”. And he noted the key question is the number of hikes are required to reach neutral.

He also warned of trade policy of the US. Bostic said “I began the year with a decided upside tilt to my risk profile for growth, reflecting business optimism following the passage of tax reform. However, that optimism has almost completely faded among my contacts, replaced by concerns about trade policy and tariffs. Perceived uncertainty has risen markedly. Projects already under way are continuing, but I get the sense that the bar for new investment is currently quite high. ‘Risk off’ behavior appears to be the dominant sentiment among my contacts. In response, I’ve shifted the risks to my growth outlook to balanced.”

US halts wargames with South Korea, continues with Japan

The joint military exercises of the US and South Korea are formally halted. The South Korean defense ministry said in a statement that “South Korea and the United States have agreed to suspend all planning activities regarding the Freedom Guardian military drill scheduled for August.” Pentagon spokeswoman Dana White said separately that “we are still coordinating additional actions. No decisions on subsequent wargames have been made.”

On the other hand, the join military exercises of US and Japan will continue as usual. Japan’s Chief Cabinet Secretary Yoshihide Suga said there is no change to the planned drills. And, Suga added “the United States is in a position to keep its commitment to its allied nations’ defense and our understanding is there is no change to the U.S. commitment to the Japan-U.S. alliance and the structure of American troops stationed in Japan.”

RBA unsure next move is a hike?

A major surprise from the RBA minutes released today is that it no longer predicts the next rate move as a increase. Back in the April and May meeting minutes, the central bank noted that “in the current circumstances, members agreed that it was more likely that the next move in the cash rate would be up, rather than down.” But such reference is taken out from the June minutes.

While that’s a notable change, it shouldn’t be taken too seriously for the time being. The minutes were on the meeting held on June 5. On June 13, last Wednesday, RBA Governor Philip Lowe reiterated in a speech that “the national accounts provided confirmation that the Australian economy is moving in the right direction … If this continues to be the case, it is likely that the next move in interest rates will be up, not down.”

Otherwise, the minutes revealed nothing special. The main factor behind RBA’s neutral stance is sluggish wage growth. It reiterated that the unemployment rate steadied at 5.5%. Ratio of job vacancies to the number of unemployed workers had remained well below levels seen a decade earlier. Both suggested that “spare capacity remained in the labour market.” And, “wages had continued to grow at a low and stable rate”.

Also from Australia, House Price index dropped -0.7% in Q1 versus expectation of -0.9%. 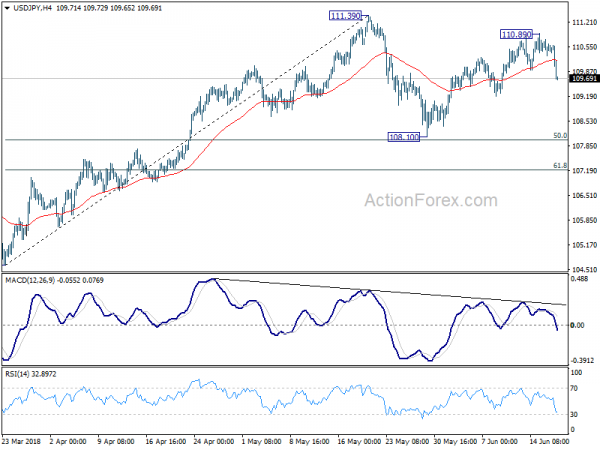 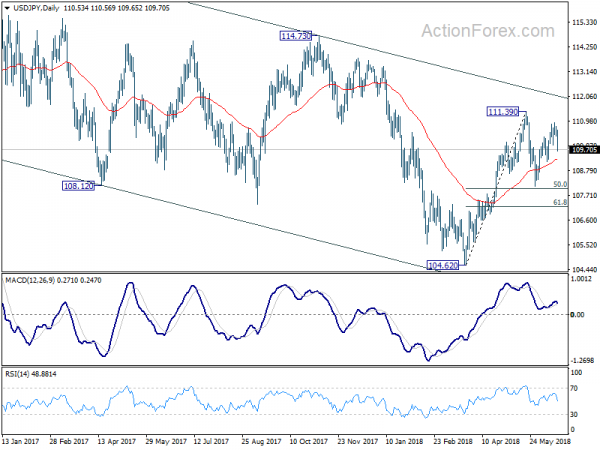 Japanese Yen Trading A Tad Lower In The Morning Session