Dollar strengthens broadly in Asian session, followed by New Zealand Dollar and Japanese yen. On the other hand, Australian Dollar is the weakest, followed by Canadian Dollar and the Euro. But after all, major pairs and crosses are bounded in Friday’s range. Movements are so far very limited. Weakness is seen in Asian markets in general. At the time of writing, Nikkei is down -1.26%, Shanghai SSE is down -1.13%, Singapore Strait Times is down -0.65%. WTI crude oil pares some recent gains but stays firm above 73. Gold continues to hover around 1250 and last week’s low at 1246 looks vulnerable.

The upcoming week is very eventful, starting today. It’s particular important for Sterling, Canadian Dollar and Australian Dollar with important data and RBA meeting featured. Technically, despite last week’s retreat, Dollar is staying near term bullish in general. Main focus will be on 1.1507 support in EUR/USD, 1.0348 in GBP/USD and 0.7328 in AUD/USD. We’re expecting downside breakout in these pairs sooner or later. USD/CAD is a tricky one due to BoC rate outlook, but we’ll stay bullish as long as 1.3067 support holds.

EU warned auto tariffs could cost USD13-14B in US GDP

According to a report by POLITICO, European Commission sent a 11-page document to the US Commerce Department’s Bureau of Industry and Security on Friday. It warned that tariffs on European cars will be “harmful first and foremost for the US economy.” And, the impact of such tariffs on US GDP would be “in the order of 13-14 billion USD.” Additionally, the “current account balance of the US would be not affected positively.”

The document also pointed out that European carmakers contributed to production of 2.9m cars in 2017, around 26% of US production. And, production of EU-owned American car companies amounts to 16% of national production, or 1.8m vehicles. In addition to that, “EU companies based in the US export a significant part of their production, thus contributing substantially to improving the US trade balance, which is a priority of the administration.”

Also, “around 60 percent of automobiles produced in the US by companies with exclusive EU ownership are exported to third countries, including the EU. Measures harming these companies would be self-defeating and would weaken the US economy.”

Trump said EU is as bad as China, just smaller

Trump continued his attack on the EU as hie told Fox News on Sunday that “The EU is possibly as bad as China, just smaller, okay. It’s terrible what they do to us.” He added that “take a look at the car situation, they send their Mercedes in, we can’t send our cars in. And, “look what they do to our farmers, they don’t want our farm products. In all fairness they have their farmers so they want to protect their farmers. But we don’t protect ours and they protect theirs.” He also noted that “they made, last year, $151bn in trade surplus. We had a deficit with the EU.” And, “on top of that, we spend a fortune on NATO to protect them.” Trump also confirmed he will sanction European companies if they do business with Iran, in spite of requests for exemption from EU.

Separately, US ambassador to Estonia James D. Melville Jr. said in his own private facebook post that he’s retiring earlier due to Trump’s behavior and comments. That came less that two weeks ahead of NATO summit in Brussels on July 11, 12. Melville wrote in the post that “A Foreign Service Officer’s DNA is programmed to support policy and we’re schooled right from the start, that if there ever comes a point where one can no longer do so, particularly if one is in a position of leadership, the honorable course is to resign. Having served under six presidents and 11 secretaries of state, I never really thought it would reach that point for me.”  And, “For the President to say the EU was ‘set up to take advantage of the United States, to attack our piggy bank,’ or that ‘NATO is as bad as NAFTA’ is not only factually wrong, but proves to me that it’s time to go.”

Japan PMI manufacturing revised down to 53.0

Japan PMI manufacturing was finalized at 53.0 in June, revised down from 53.1. Joe Hayes, Economist at IHS Markit noted that “Japan manufacturing PMI data continue to signal that the sector’s current expansion phase still has legs. Output growth edged up in June, supported by further inflows of new work and an accelerated rate of employment growth.” However, “concerns do remain however, as new order growth eased to a ten-month low and export sales decreased for the first time since August 2016. Moreover, with input price inflation jumping to a three-and-a-half year high, manufacturers may be forced to absorb higher cost burdens in order to remain competitive, particularly if the yen faces further safe haven demand.”

China Caxin PMI manufacturing dropped 0.1 to 51.0 in June, met expectations. Dr. Zhengsheng Zhong, Director of Macroeconomic Analysis at CEBM Group said in the release that “index for new export orders fell to a low for the year so far and remained in contraction territory, pointing to a grim export situation amid escalating trade disputes between China and the U.S., which led to weak demand across the manufacturing sector.” Also, “employment index dropped for the second consecutive month, indicating worsening layoffs.” “Overall, the manufacturing PMI survey pointed to strengthening price pressures in June. Deteriorating exports and weak employment, along with companies’ destocking and poor capital turnover, put pressure on the manufacturing sector.”

Released over the weekend, the official China PMI manufacturing dropped -0.4 to 51.5 in June. Official PMI non-manufacturing rose 0.1 to 55.0.

New Zealand Treasury’s Monthly Economic Data report noted that the 0.5% real GDP growth in Q1 was below the forecast set in the Budget Economic and Fiscal Update (BEFU). Terms of trade fell by -6.7% due to  a slight fall in export prices and an increase in import prices, contributing to -0.4% decline in nominal GDP. Consumption indicators were soft. Business confidence deteriorated further in June, hitting post-election lows. Combined they suggest “there is a little less momentum in the economy and poses some downside risk to our BEFU GDP forecast in the near-term.” The report also warned that “risks around trade continue to escalate with tariffs affecting a range of trade between the US and China, and a growing number of other countries.”

Manufacturing data as focus of today, important week for GBP, CAD and AUD

Looking ahead, the week is big for Sterling, Canadian Dollar and Australia Dollar. UK PMIs may show slightly retreat in business sentiments. But upside surprises there will add to the case for an August BoE hike. Canadian employment data will also be crucial for BoC policy makers regarding July rate hike. Following last week’s dovish RBNZ statement, there are speculations that RBA could follow suit. The RBA statement and retail sales will determine whether AUD/USD can hold on to 0.7328 key support. Meanwhile, US will release ISMs and non-farm payrolls this week. FOMC minutes will be a major feature too. Attention will be on how Fed officials are confidence on a total of four rate hike this year. 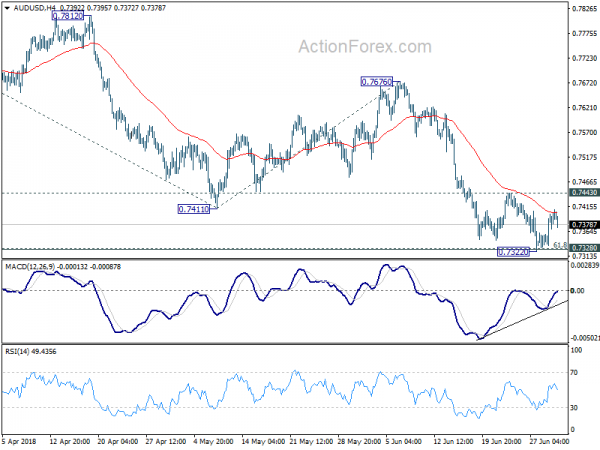 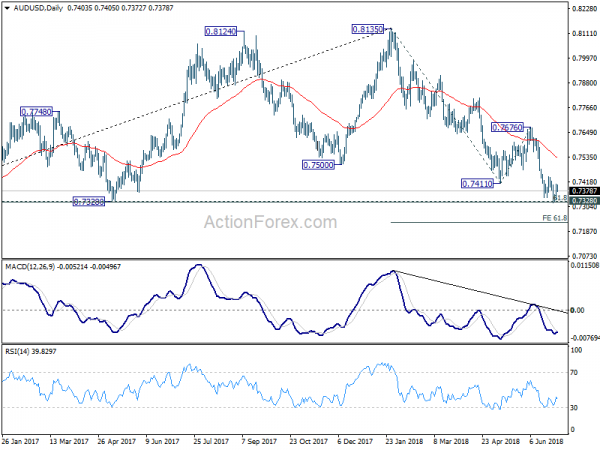