In the currency markets, Yen and Dollar continue to be the strongest one for the week, with Yen slightly stronger for today. New Zealand Dollar remains under broad based pressure. Australia Dollar, while staying the second weakest for the week, recovers as RBA didn’t deliver any dovish surprise.

Technically, AUD/USD’s break of 0.7328 support overnight suggests down trend resumption. Further fall is now expected to next projection level at 0.7229. EUR/AUD extended recent rally to as high as 1.5886 and its on course for 1.6 handle. USD/JPY is struggle to find momentum after breaching 111 and we might see more consolidations first. EUR/USD and GBP/USD are saying in range above 1.1507 and 1.3048 as consolidations are extending.

RBA left cash range unchanged at 1.50% as widely expected. Overall reaction from the markets is muted as the statement provides little new information.. On the economy it noted that recent data “continue to be consistent” with the central bank’s forecast of “a bit above 3%” GDP growth in 2018 and 2019. National income was given a boost by higher commodity prices. But term’s of trade are expected to decline over the next few years. Labor market development remains “positive” but wages growth remains “low”. Inflation is expected to remain low “for some time too. RBA maintain the view that further process in lower unemployment will lift inflation back to target. But the progress is likely “to be gradual.”

A more notable change is that RBA omitted “An appreciating exchange rate would be expected to result in a slower pick-up in economic activity and inflation than currently forecast.”. It looks like, after the depreciation since January, RBA is less concerned on exchange rate.

While meeting with Dutch Prime Minister Mark Rutte in Washington, US President Donald Trump issued fresh warning to the WTO. When asked is he’s preparing to pull out of the WTO, Trump said it has treated the US “very, very badly and I hope they change their ways”. He added that the US has a “a big disadvantage with the WTO. And we’re not planning anything now, but if they don’t treat us properly, we’ll be doing something,” That came after earlier report Axios, based on unnamed source, that Trump has completed to his officials “I don’t know why we’re in it. The WTO is designed by the rest of the world to screw the United States.”

In an CNBC interview, Tony Fratto, deputy press secretary under President George W. Bush, blasted the idea of leaving WTO. He said, “to say that the United States is a loser in a WTO world is just completely inaccurate. We created the WTO as the dominant economy in the world to serve our interests.” While improvements are needed, there are better ways than “to hold it hostage and to threaten to pull out of it.” And He added that pulling out of WTO is a “ridiculous idea”.

On the other hand, former Trump advisor Dan DiMicco also told CNBC that “If the WTO can’t be any more effective than it has been the last 20 years … then the WTO is not helping the world trading system, it’s hurting it, and we should be prepared to walk away.”

White House spokeswoman Sarah Sanders issued fresh confrontation to Canada as the latter retaliation tariffs on US steel tariffs took effect. Sanders said in a media briefing that “escalating tariffs against the United States does nothing to help Canada. It only hurts American workers.” Sanders added that “we’ve been very nice to Canada for many years, and they’ve taken advantage of that – particularly advantage of our farmers.” And, “the president is working to fix the broken system, and he’s going to continue pushing for that.”

Canada officially slapped tariffs on more than USD 12B of US goods effective on July 1. A range of products were targeted including steel and aluminum, coffee, pizza, condiments, whiskers etc. Chrystia Freeland, Canada’s minister of foreign affairs said that “we will not escalate, and we will not back down.”

The Nikkei Review reported earlier this week that BoJ will likely lower inflation forecast at the upcoming quarterly Outlook for Economic Activity and Prices. The new projections will be published after July 30-31 meeting.

BoJ scrapped its “timeline” of hitting 2% inflation target around fiscal 2019, back in the April statement. But it’s been clarified multiple times by BoJ communications that the “timeline” was merely a projection, not a target.

EUR/AUD’s rally continues today and reaches as high as 1.5886 so far. Intraday bias is now on the upside as rise from 1.5271 should target a test on 1.6139/89 resistance zone. However, as the rebound from 1.5271 is not clearly impulsive yet and momentum isn’t too convincing. Break of 1.5695 minor support could be an early sign of near term topping. In such case, focus will be back on 1.5425 support. 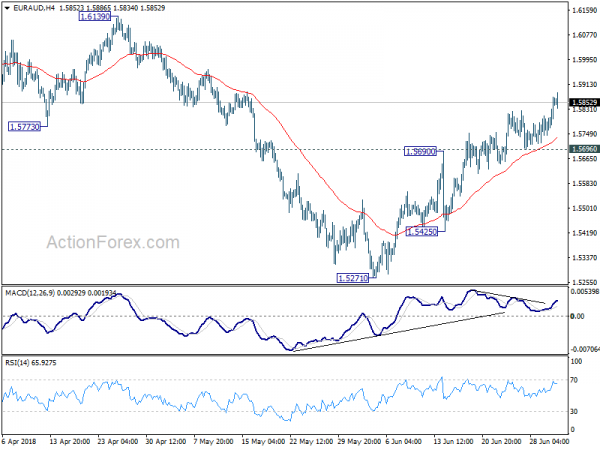 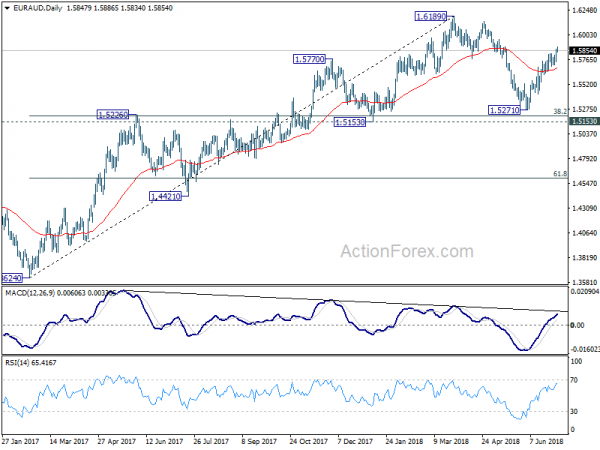