Euro surges broadly today on hope that there will finally be a point of convergence between European Union and the US to avoid a trade war on cars. The optimism is also reflected in stocks as automaker shares led DAX higher, which is up 1.44% at the time of writing. CAC is gaining 1.2% whole FTSE rises 0.63%. Sterling also follows Euro higher as upbeat comments from BoE Governor Mark Carney added the chance for an August rate hike.

Yen on the other hand, reverses its fortune as stocks rebound and is trading as the weakest one. Dollar follows as the second weakest, as slightly worse than expected job data provides no support. The greenback will look into FOMC minutes to be released later in US session. The minutes might reveal the discussions on raising the projections on Fed hikes from a total of three to four this year. But traders could look through the minutes for tomorrow’s non-farm payroll report.

Technically, while EUR/USD and GBP/USD rebounds further today, they’re still seen as in recent near term consolidation pattern. Thus outlook stays bearish and the larger declines are still expected to resume sooner or later. EUR/GBP’s rebound ahead of 0.8796 retains near term bullishness too.

Euro surges on ECB and hope for trade spat resolution

There are two main factors driving up the Euro today. Firstly, it’s a delayed reaction to reports regarding ECB. Markets are fully pricing in a 10bps hike to the deposit rate only in December 2019. Odds of a September 2019 hike is at around 80%. And it’s reported that some ECB policy makers are unhappy with it. A sticky point is that ECB is clear with its communication that rates will remain at present level at least through the end of summer of 2019. That left markets with some rooms for interpretation on whether it means the end of “September”.

But, we’d like to highlight one thing. Fed is clear with its projection of two more hikes this year. And fed funds futures are pricing in only around 50% chance for that. So, in our view, there’s nothing special for ECB officials to be unhappy about.

Secondly, it’s also reported that Trump would agree to end the trade dispute on car if both EU and the US would drop all auto tariffs. German newspaper Handelsblatt reported that US ambassador to Germany Richard Grenell had met with executives from Daimler, Volkswagen and BMW to brief the idea. Major European indices are lifted by the news as strongest gain seen in DAX. German bund yields are also pushed higher.

German Chancellor Angela Merkel said today that she would back lowering tariffs on US auto imports. But she also emphasized that “when we want to negotiate tariffs, on cars for example, we need a common European position and we are still working on it.” Nonetheless, she added that “I would be ready to support negotiations on reducing tariffs but we would not be able to do this only with the U.S.”

Merkel’s comments are more consistent with reports that EU is working on a “plurilateral agreement”, with major car exporters including US, South Korea and Japan, to reduce tariffs to an agreed level for a specified set of products. In such setting, the deal could be struck without involving all of WTO member nations. European Commission President Jean-Claude Juncker is going to meet with Trump later in July on trade and could put forward such proposal

The markets are possibly seeing a point of convergence between the EU and Trump on auto tariffs to avoid a trade war. But as Merkel said yesterday, “we need two parties for that to happen.”

Eurozone retail PMI rose 0.1 to 51.8 in June. The overall gain was driven by German consumers while sales fell slightly on annual measure. Trevor Balchin, Economics Director at IHS Markit, noted that “sales have risen month-on-month since April 2017, except for a blip in April this year”. However, the “three largest economies in the eurozone continued to show widely differing trends”. German posted a nineteenth straight month of increase and the strongest expansion in near three years. Italy, on the other hand, dropped for the seventh time in eight months. France registered a decline for the first time since March 2017.

Also released in European session. German factory orders rose 2.6% mom in May, above expectation of 1.1% mom. Swiss CPI rose to 1.1% yoy in June, in line with consensus.

BoE Governor Mark Carney delivers a speech titled “From Protectionism to Prosperity” where he also talked about monetary policy. He noted that the current path the economy is going is “consistent with the MPC’s current projection”, with the assumption of a relatively smooth Brexit.

Since the May meeting “international data have been mixed” with robust growth in the US and fading momentum in Eurozone. And there were marked loss of momentum in some merging markets. However, domestically, Carney said “the incoming data have given me greater confidence that the softness of UK activity in the first quarter was largely due to the weather, not the economic climate.”

He pointed to some “number of indicators of household spending and sentiment have bounced back strongly” erratic Q1. Labor market has “remained strong” and there is “widespread evidence that slack is largely used up.” Pay and domestic cost growth have “continued to firm up broadly. And headline inflation is still “expected to rise in the short term” due to energy prices.

The overall impressions from Carney is that he’s rather confidence that economy developed as expected. And that would add to the case for an August rate hike.

BoJ board member Takako Masai said in a speech that “outcome of protectionist moves in the United States as the downside risk that is of greatest concern”. In the short term, “growing uncertainty over U.S. trade policy will likely lead to a sharp rise in volatility in global financial markets”. This could lead to “adverse effects on the sentiment of firms and households.”

In the medium-to-long term, “if such protectionist moves were to increase globally, this may significantly affect the business strategies of global firms, and the subsequent impact on the capital flow of trade and investment cannot be ignored. ” Masai added he will closely monitor “whether the protectionist moves entail the risk of causing any imbalances in the global capital allocation.”

RBA Head of Economic Analysis Department Alexandra Heath said in a speech today that recent data have been positive. She pointed to picked up in growth to 3% over the year to March quarter. And, the central forecasts is for growth to be at or above 3% over 2018 and 2019. With that, there will be a “further gradual reduction” in spare capacity and a “gradual increase in wage and inflationary pressures”.

The improvement came as the drag from falling mining investments has diminished. According to Heath, such negative effect form mining will also be done by early next year. Public sector also played a part in the contribution. There was also significant increase in non-mining investment. And, Heath added that “we are now more confident about a sustainable pick-up in non-mining business investment.” 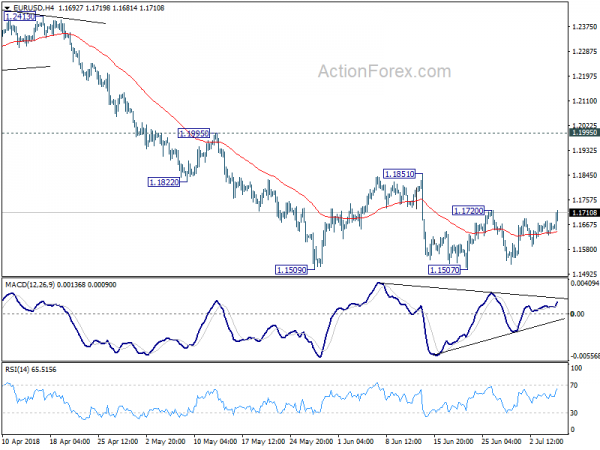 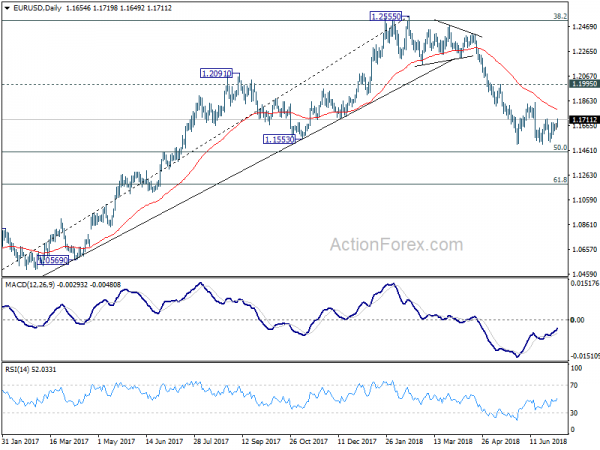