Unclear Direction in Forex Markets, Yen Softer ahead of BoJ

Euro and Swiss Franc are lifted in earlier today but was then out-performed by New Zealand Dollar. On the hand, Yen and Australian Dollar are trading as the weakest ones, followed by Dollar. Direction in the forex markets is relatively unclear as traders turned a bit cautious ahead of the long list of heavy weight events ahead. It starts with BoJ rate decision tomorrow and then we’ll have US PCE, ISM and NFP, FOMC, BoE, UK PMIs, Eurozone CPI etc. Yen’s softness, despite resilience in JGB yield and mild risk aversion, could be explained by such cautiousness ahead of BoJ. In other markets, WTI crude oil is picking up momentum in recovery and breaches 70 handle. Gold continues to struggle around 1220.

Technically, Dollar’s weakness today now put 0.9900 in USD/CHF and 1.3032 in USD/CAD into focus. Recovery in EUR/JPY and GBP/JPY indicates temporary bottoming. But break of 130.25 and 146.51 minor resistance respectively is needed to indicate near term reversal. As Sterling lags behind Euro and Swiss Franc, 1.3070 minor support in GBP/USD will remain a focus for the session.

BoJ rate decision is a major focus in the upcoming Asian session. It’s widely expected to keep monetary policy unchanged. Under the Yield Curve Control framework, short term policy rate should be held at -0.10%. Target on 10 year JGB yields will also remain at around 0%. ut recently, there are speculations that BoJ could widened the back for 10-year JGB yield targets, probably up to 0.1%. That’s a key factor in driving up JGB yields as well as the Japanese Yen. At this early stage of discussion, we don’t think there is enough consensus for BoJ to make a decision. A change in their statement will be a big surprise to the markets.

Today, BoJ offered to buy 10 year JGBs at 0.10% yield again, the third operation of such kind in just over a week. A record JPY 1.64T of JGBs were purchase, surpassing the prior record of JPY 724B in February.

Released in Japan retail sales rose 1.8% yoy in Jun, above expectation of 1.7% yoy.

Swiss KOF Economic Barometer dropped -0.2 to 101.1 in July, below expectation of 101.5. The reading still sit slightly above the long-term average of 100, indicating a slightly above-average economic development in Switzerland in the coming months. KOF noted in the release that “negative indicators for manufacturing, the export industry and the accommodation and food service activities sector were mainly responsible for the slight decrease.” On the other hand, “positive signals come from the banking and the construction sectors.”.

BoE Carney: We can choose between low road of protectionism or high road of trade liberalization

BoE Governor Mark Carney said in a Bloomberg interview that the world could choose between a “low road of protectionism focused on bilateral goods-trade balances” and a “high road of liberalization of global trade in services.” But he warned that the “low road will cost jobs, growth, and stability”. Meanwhile, the “high road can support a more inclusive and resilient globalization.” Carney said that the trade actions taken by Trump as of June had small impacts. But “a larger increase in tariffs would have a substantial impact”.

Domestically, Carney said that it’s “more likely than not” that the equilibrium interest rates have risen. But “any given jurisdiction has to take into account its own domestic forces, whether there are headwinds from fiscal policy, headwinds from uncertainty, headwinds from trade discussions or other factors.”

New UK Foreign Minister Jeremy Hunt met with China’s Foreign Minister Wang Yi in Beijing today. After the meeting, Hunt said China made an offer to “to open discussions about a possible free trade deal done between Britain and China post Brexit”. And he added that “that’s something that we welcome and we said that we will explore.” Wang didn’t mention the free trade talks directly. But he said both countries had “agreed to proactively join up each others’ development strategies, and expand the scale of trade and mutual investment”.

Wang: China not to blame for trade imbalance with US

Separately, Wang said that “the responsibility for the trade imbalance between China and the United States lies not with China.” And he cited the global role of the US Dollar, low saving rates, high level of consumption and US restrictions on high tech exports as some of the reasons for the imbalances. He also reiterated the stance that “China does not want to fight a trade war, but in the face of this aggressive attitude from the United States and violation of rights, we cannot but and must take countermeasures.”

As US-China trade conflicts intensify, there has been much speculation that China is weakening its currency as a retaliatory measure in face of Trump’s tough tariffs. Many even cited the recent rapid selloff of renminbi as evidence. We agree that there is such a phenomenon that the Chinese government tends to allow its managed-float currency to decline more than rise.

However, we believe the recent renminbi weakness is more driven by slowdown in Chinese economic growth, the shift of Chinese policy (both fiscal and monetary) to the loosening side and the consequential monetary policy divergence between the Fed and PBOC.

For the months ahead, we expect risk remains skewed to the downside for renminbi. However, the Chinese government would carefully calibrate it so that the disastrous selloff back in 2H11 would not repeat. 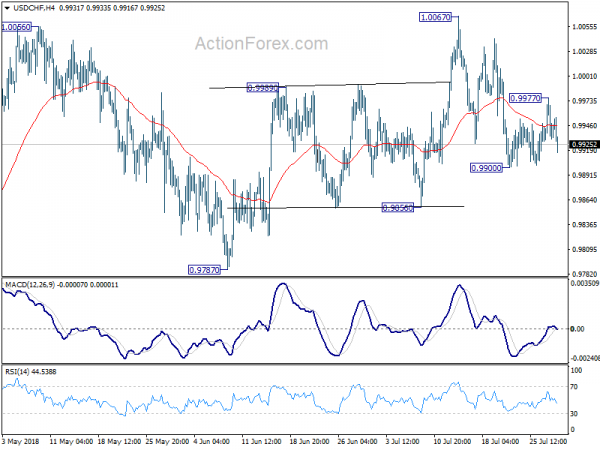 In the bigger picture, as long as 0.9787 support holds, we’re favoring the bullish case. That is, rise from 0.9787 is resuming the whole up trend from 0.9186 and should target 1.0342 key resistance on resumption. However, break of 0.9787 will indicate medium term reversal and turn outlook bearish. 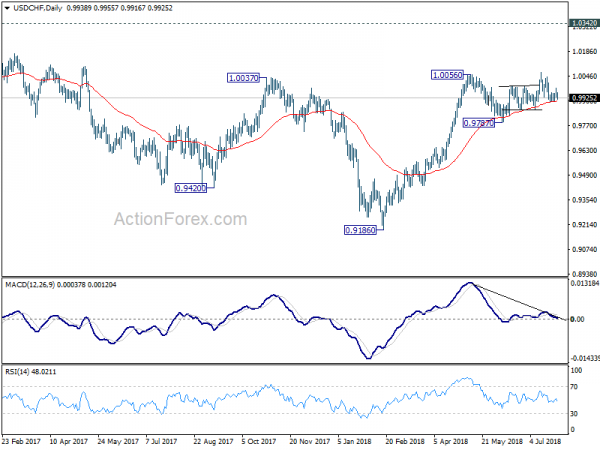