Dollar gains broadly in a rather quiet start to the week. Asian stocks are given a lift by China’s move to stabilize the Yuan. But the impact quickly fades. At the time of writing, Nikkei is nearly flat after initial rally to 22635. Hong Kong HSI is up 0.7% while China SSE is down -0.77%. USD/CNH (offshore Yuan) is hovering around 6.84, comparing to last week’s high at 6.9126. The lack of follow through buying in Yuan helps clear a near term obstacle for more Dollar rally. Meanwhile, risk aversion could keep the Yen firm.

Technically, EUR/USD’s break of 1.1574 minor support last week is tentatively taken as a sign of range break out. Deeper fall is likely for 1.1507 key near term support next. GBP/USD is still way off 1.2956 support despite last week’s selloff. Nonetheless, we’d expect GBP/USD to have a take on this level soon. USD/CAD is at a point where it should be ready for a rebound, close to 1.2967 fibonacci projection level. We’ll see if USD/CAD could gather some buying from here.

The People’s Bank of China’s starts today to raise foreign exchange risk reserve ratio from 0% to 20%. It’s a move to stabilize the Yuan and curb capital outflow and was announced Friday after close. The move gives some support to Chinese and Hong Kong stock today but the impact seems to fade quickly. The Shanghai Composite index, SSE, edged higher to 2760.47 but it’s back down -0.77% at 2719.38 at the time of writing. It’s still more likely than not to revisit 2700 handle and possibly 2016 low at 2638.30.

USD/CNH (offshore Yuan) also stabilized at around 6.84 at the time of writing. There is no follow through selling after the spike move on Friday, following PBoC’s announcement. For now, 55 H EMA (0.6850) is capping the upside and more decline is mildly in favor back to 6.7703 support. But a break above the EMA could prompt another selloff in the Yuan back to 6.9.

UK Trade Minister Liam Fox said in an interview with the Sunday Times that he saw “not much more than 60-40” chance of a no-deal Brexit. And he put the blame on EU as the “intransigence of the (European) commission is pushing us towards no deal.” He also warned that if EU chooses “theological obsessions of the unelected” over “economic wellbeing of the people”, then it’s a “bureaucrats’ Brexit, not a people’s Brexit”. He went further and said it’s up to EU to choose “ideological purity” or “real economies:”

Domestically, Fox also criticized that “there are people trying to undermine, to block and to thwart Brexit and having fought so long and hard to get to this point, I don’t want anything done to jeopardise our exit from the EU.” He added “the most important thing is that we actually leave the EU in March of next year. And my job is making sure that Britain is match fit for whatever Brexit outcome we have.”

ECB Lautenschläger very much in favor of policy normalization

ECB Executive Board member Sabine Lautenschläger said in an interview that she is “very much in favor of normalizing monetary policy”. That is, “gradually increase interest rates again”. However, she emphasized that’s on a precondition that Eurozone is “on a sustainable path towards price stability”. Also, she noted that “after pursuing such an expansionary monetary policy, it would be wrong to now move abruptly in the other direction”. And that “wouldn’t help either the economy or price stability.” The interview was done with Welt am Sonntag on July 30, published on August 5.

New Zealand Treasury: Any RBNZ tightening remains some time away

The report also noted that inflation “remained subdued” and “any monetary policy tightening remains some time away”. It pointed out market pricing “currently implies no OCR increase for at least 12 months”. And, the Treasury expected ” outlook for inflation to remain stable for the rest of the year as the drivers in either direction remain largely in balance.”

Also, it noted that “possibly the most significant risk to the world growth outlook is escalating trade protectionism”. The report said that “the direct effects of tariff measures announced by the US and China to date are expected to be minor”. However, “the Australian and New Zealand economies are likely to be significantly impacted should there be a more generalized downturn in commodity prices”.

RBA and RBNZ to highlight the week

Two central banks will highlight the week ahead. Both RBA and RBNZ are expected to stand pat. And, both will likely maintain the interest rates will stay at present level for a while. RBA is having a tightening bias and we don’t expect to change. But a shift in RBA bias could prompt rather serious selloff in Australian Dollar. In addition to that, BoJ summary of opinions is worth a read too. We’d like to know more on policymakers’ minds regarding the widening of 10 year JGB target band from 0% to between -0.1% and 0.1%. Also, we’re keen to know more regarding the discussion on forward guidance too. ECB monthly bulletin will be released but it’s usually quite academic which triggers little market reactions.

On the data front, Japan and UK GDP are two of the most important pieces. UK will also release production data. US CPI and PPI as well as Canada employment will also be closely watched. Also, China will release trade balance, CPI and PPI will be featured.

Intraday bias in EUR/USD remains cautiously on the downside for the moment. Prior break of 1.1574 minor support is tentatively treated as sign of downside breakout and down trend resumption. Deeper fall would be seen to retest 1.1507 support. Break there will resume larger down trend from 1.2555 through retracement of 1.0339 to 1.2555 at 1.1447. On the upside, however, above 1.1610 minor resistance will delay the bearish case and extend the consolidation from 1.1509 with another rebound instead. 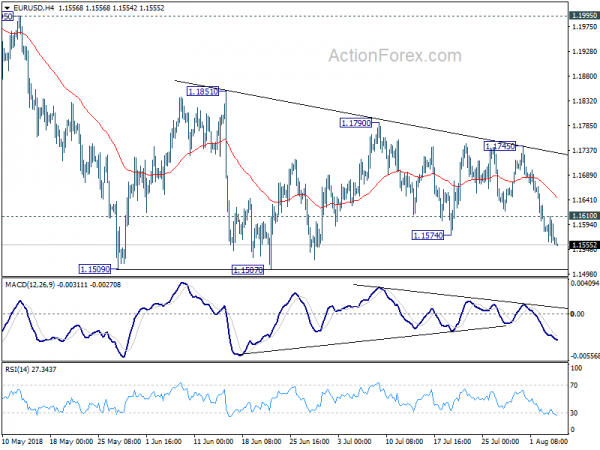 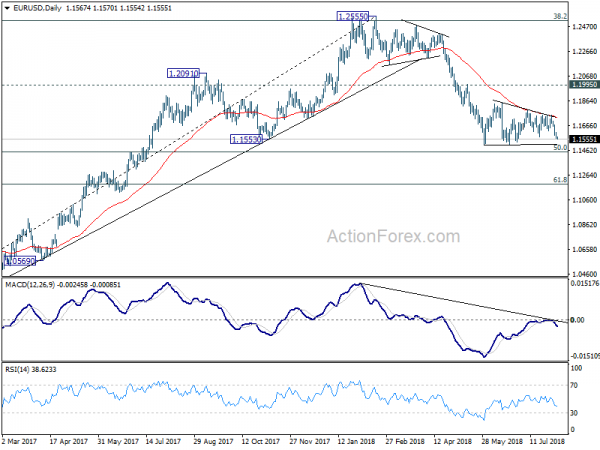