On the other hand, Australian Dollar is staying as the strongest today and picks up momentum slightly. Markets responded to generally welcomed Scott Morrison as new Prime Minister, and he ruled out calling a general election in near term. Fitch rating agency also said the leadership change will not have any impact of Australia’s rating. New Zealand Dollar follows as the second strongest.

St. Louis Fed Bullard would stand pat on rate if it’s just him

St. Louis Fed President James Bullard said in a CNBC interview that he doesn’t see much inflation in the economy. And, he went further saying that it’s not a situation where Fed has to be “pre-emptive”. And “if it was just me, I’d stand pat where we are and I’d try to react to data as it comes in.”

Regarding growth, he said “it’s going to be a good year, and part of that is fiscal stimulus”. However, the economy is “going to slow in 2019 and 2020” and “that’s the standard forecast that’s out there”.

Separately, Bullard told Bloomberg TV that Fed should not do anything that knowingly invert the yield curve. This sort of echoes comments of Atlanta Fed President Raphael Bostic.

Cleveland Fed President Loretta Mester said there’s more momentum in the economy then she anticipated. And, she’s been “upping” her forecasts, now expecting 2.75-3.00% for the year, and “probably close to 3%. She said that “the fiscal policy – the stimulus and the tax cuts – has been a positive for the economy in terms of demand growth and so that’s one of the factors.”

Mester also support the gradual path of monetary accommodation removal. But for now, it’s hard to judge whether the fed funds rate needs to go above neutral rate. But her neutral rate, at 3%, is higher than her fellows.

The overall set of data argues that the impact from escalation of US-China trade war didn’t have material impact of business investments yet, despite the cries for lower confidence. However, August and September figures will provide a more realistic picture as larger batch of tariffs came into effect.

On the issue of disembarkation of 150 migrants being held on a coast guard ship in Sicily, Italian Deputy Prime Minister Lugi Di Maio insisted that other EU countries should share the burden. He threatened on television that “the soft line does not work, the hard line will be to withhold funds if they don’t listen to us.”

On the other hand, European Commission spokesman Alexander Winterstein told a news conference that “unconstructive comments, let alone threats, are not helpful and will not get us any closer to a solution. The European Union is a community of rules and it operates on the basis of rules, not threats,”

Envoys from a dozen members states meet in Brussels to discuss disembarkation from the guard ship Diciotti.

RBNZ Orr: New Zealand fundamentals strong but biggest challenge is to get inflation to rise

RBNZ Governor Adrian Orr said in a Bloomberg interview at Jackson Hole that the economy is well supported with a “very supportive exchange rate” and “strong terms of trade”. The fundamentals for New Zealand are strong with “stable monetary policy”, “low inflation”, “very good fiscal account”, “accommodative exchange rate” and it’s a “very positive story”. But the country has come a period of strong population growth which is easing, therefore, the focus is shifted from “consumption” to “earning.

The “biggest challenge” is to “get inflation to rise” as it’s below mid-point of 1-3% target for a couple of years. To do that, Orr reiterated that RBNZ will hold interest rate low for a long period of time and it’s “in no rush to raise interest rate”. And, Orr also emphasized that “we don’t rule out a cut” if necessary.

According to Orr, trade war will have to be very real and vicious before having an impact on New Zealand significantly. And, trade income will have to fall quite considerably before affecting the country’s term of trade.

GBP/USD recovers after dipping to 1.2798. But we’re still favoring the case that corrective rebound from 1.2661 has completed at 1.2935 already. Further decline should be seen to retest 1.2661 low first. Break will resume larger down trend from 1.4376. On the upside, in case of another rebound, we’d still expect upside to be limited by 1.2956 support turned resistance. However, decisive break of 1.2956 will turn focus to 1.3212 key resistance instead. 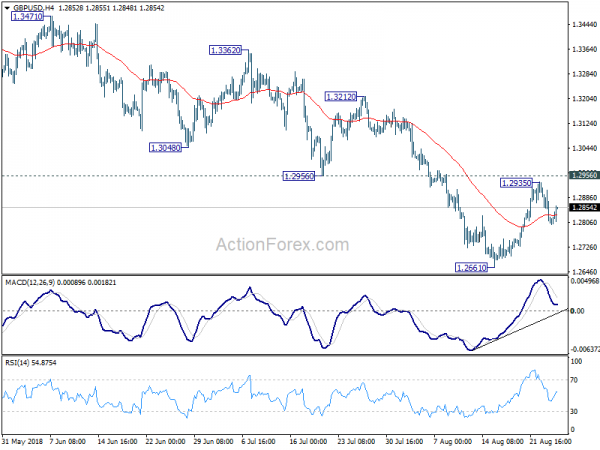 In the bigger picture, whole medium term rebound from 1.1946 (2016 low) should have completed at 1.4376 already, after rejection from 55 month EMA (now at 1.4091). Current downside acceleration argues that it’s possibly resuming long term down trend. In any case, outlook will stay bearish as long as 1.3212 resistance holds. Retest of 1.1946 should be seen next. 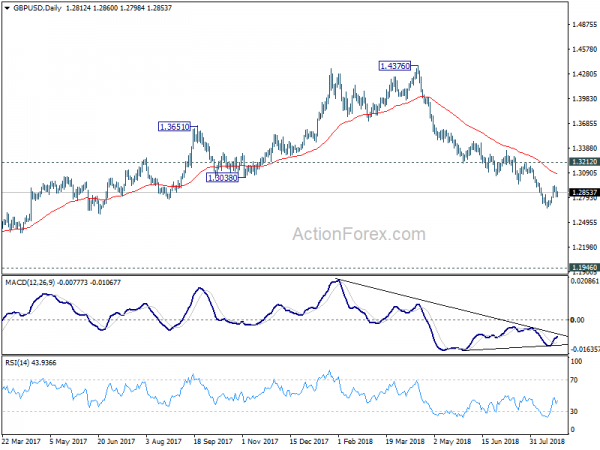