The forex markets are rather quiet in Asian session today, with the exception of some notable weakness in Canadian Dollar. Euro is so far the weakest one but it’s kept above yesterday’s low. Sterling follows as second weakest together with Loonie. On the other hand, Dollar, Australia and New Zealand Dollar are the strongest one so far. Aussie is in consolidation after last week’s steep selloff. As there is no dovish surprise in RBA statement, Aussie will likely be supported for some more sideway trading in near term.

Technically, USD/CAD’s breach of near term channel resistance suggests that corrective fall from 1.3385 might be completed at 1.2886 already. Focus will be on 1.3173 resistance today for confirmation of this bullish implication. GBP/JPY breached 142.81 support but there is no follow through selling yet. GBP/USD is also held above 1.2844 equivalent support. UK construction PMI will probably provide the trigger for making or breaking this level.

RBA kept cash rate unchanged at 1.50%. The accompany statement is over 90% a carbon copy of the prior one.

Globally, RBA noted that advanced economies are growing at above-trend rate with low unemployment which China’s growth slowed a little. Inflation remains low but further increases are expected. There is one ongoing uncertainty due to US international trade policy. Domestically, RBA maintain the forecasts of a bit above 3% growth in 2018 and 2019. Household consumption is one continuing source of uncertainty.

Terms of trade are expected to decline over time but stay at relatively high level. Australian Dollar has “depreciated against the US dollar along with most other currencies.”

Labor market outlook remains positive and further gradual decline in unemployment is expected to around 5%. Wage grow should pick up over time, gradually. Inflation is expected to slow to 1.75% in Q3 due to once-off declines in some administered prices. But it’s expected to pick up in 2019 and 2020.

BoE Carney’s future to be asked in inflation report hearing

BoE Governor Mark Carney will appear in the Parliament for Inflation Report hearing today. While his views on the economy and interest rates will be scrutinized as usual, there’s another topic to watch. That is, whether Carney will extend his term or not.

The BBC reported yesterday that Treasury is in talks for extending Carney’s term once more. Carney, started the job in 2013, originally planned to just serve just five years and has already extended the term once to mid 2019. On the other hand, the government’s spokesman James Slack reiterated that “the governor has said that he intends to step down in 2019. That is still the plan,”

To stay or not to stay is definitely a questions to be asked by lawmakers today.

For now, it’s uncertain who will succeed Carney. It appears that Andrew Bailey the chief executive of Britain’s Financial Conduct Authority and a former BoE deputy governor, is a front-runner. But the government could look abroad again for the candidate.

According to a Reuters poll conducted between August 29 and September 3, chance of disorderly Brexit stood at 25%, unchanged from a month ago. Opinions were divided as nine of the 34 contributors raised the chance, but four lowered the odds. Highest prediction was 60% chance.

Nevertheless, chance of a recession in the year post-Brexit was seen at 15%, down from July’s 20%. Chance for recessions within two year of Brexit was at 25%.

On BoE policies, the poll suggested that the central bank would have a 25bps rate hike soon after March 2019 Brexit date. Then, another 25bps would be added in 2020.

Japan Prime Minister Shinzo Abe said in a Nikkei Asian Review interview that while, BoJ hasn’t reached the 2% inflation target yet, Japan is “no longer in deflation”. And Abe emphasized “what we are really focused on is employment.” He outlined a plan to overhaul the social security system for the new three years.

Abe intend to raise retirement age beyond 65. And he said “more labor participation would boost economic growth, raise tax revenue and generate more social security premium receipts.” The first year of his next three year term will focus on labor issues. Pension and medical care system will be tackled in the following two years.

Additionally, Abe pledged to ease the impact of the planned sales take hikes, from 8% to 10% with “bold countermeasures”.

He also played down the threats of US trade policy and said “the U.S. and Japan share a broader goal of expanding bilateral trade and investment for the benefit of both countries and achieving a free and open Indo-Pacific based on fair trade.”

Swiss will release CPI in European session and Eurozone will release PPI. But UK construction PMI will catch more attention.

Later in the day, US ISM manufacturing in the major focus and construction spending will also be featured. Canada will release PMI manufacturing. 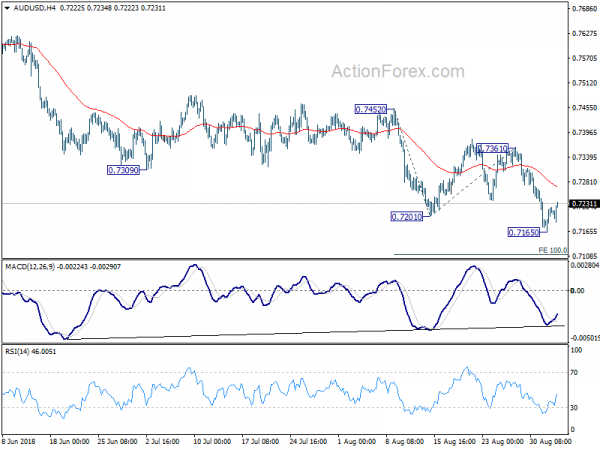 In the bigger picture, rebound from 0.6826 (2016 low) is seen as a corrective move that should be completed at 0.8135. Fall from there would extend to have a test on 0.6826. There is prospect of resuming long term down trend from 1.1079 (2011 high). But we’ll look at downside momentum to assess at a later stage. On the upside, break of 0.7452 resistance, however, will indicate medium term bottoming, on bullish convergence condition in daily MACD. In that case, a medium term correction should be seen first before down trend resumption. 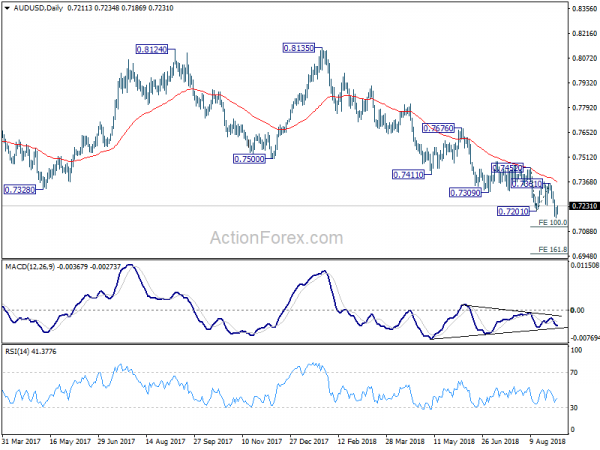 AUD/USD Could Continue To Edge Higher