It was another typical week with market moving headlines flying around. Being two highly anticipated non-events, BoE and ECB didn’t disappoint investors by giving nothing new. On the other hand, there was a deep sense of nervousness ahead of Turkish central bank rate decision. The CBRT brought investors back from over-the-top rhetorics of Turkish President and delivered the much needed rate hike. There was news that US and China were going to restart which hammered Dollar and Yen and boosted stocks and Aussie. CPI and PPI misses added more misery to the greenback. But Dollar found “savior” in Trump who fired a tweet to re-escalate the tension. And it’s reported that Trump will ignore all the outcries from American businesses and continue with new round of tariffs on China, in parallel with the trade negotiations.

Sterling ended the week as the strongest one. The highly uncertain Brexit negotiation now looks relatively much more certain than other developments in the world, like Turkish president Erdogan and Trump’s trade war policy. At least, Brexit negotiations are handled by two sides of rational people who want to make a deal. There may be jitters, may still be “substantial” differences, but both sides are optimistic for solutions. Canada ended as the second strongest one, partly supported by WTI oil which breached 70 handle briefly. Australian Dollar was the strongest as it was once boosted by US-China trade optimism and its own employment data. On the other hand, Yen was the weakest one, followed by Dollar and then Swiss Franc.

The global financial markets are deeply interconnected and the correlations are complexly entangled. For example, Turkish central bank CBRT delivered the much needed rate hike last week, raised policy rate (one week repo auction rate) from 17.75% to 24%. USD/TRY was shot down from day high of 6.5514 to as low as 6.0169 before closing the week at 6.1614.

Easing worry of another immediate Turkish Lira crisis reduced safe haven demand and helped lift 10 year German bund yield to close at 0.447. It was at 0.320 at the beginning of the month, before Italy pledged fiscal discipline. And it’s now heading back to prior range bottom at around 0.5.

Higher German yield also spread across the Atlantic to the US, and helped lift 10 year yield to as high as 3.003 before closing at 2.994. 3.016 resistance is now within touching distance too, even though key level at 3.115 is still a bit far.

Japanese 10 year yield stayed steadily firm last week at around 0.11 and closed at 0.112. But apparently, yield spread with US and Germany widened again. Together with easing risk aversion, Yen was under much pressure and ended the week as the worst performing one. Nikkei out-performed other major Asian indices because of Yen weakness and finally broke 23050.39 resistance to close at 23094.67. Sustained trading above 23050.39, if it could really do, will pave the way to 24129.34 high.

We have doubt on the sustainablilty of Nikkei’s momentum mainly because of the uncertainty on US-China trade war. It’s also another rather complicated topic. It seems that Treasury Secretary Steven Mnuchin is the only one pushing for the trade talks, possibly due to pressures from businesses. White House Economic Advisor Larry Kudlow sounded like he didn’t mind the talks. Trump sounded like he couldn’t care less. Dollar and Yen have staged notable rebound on Friday on news (based on unnamed sources) that Trump is going to start the 25% tariffs on USD 200B in Chinese imports no matter what, and soon.

In this regard, the Chinese investors looked rather smart. The Shanghai SSE just had a half-hearted rebound last week. Key support level of 2638.38 (2016 low) still looks very vulnerable. And should the new round of tariffs take effect, this 2638.30 will also certainly be taken out rather firmly. And, that should spread to other markets (non-US).

Gold traders also deserve some compliments too. Gold was on track to take out 1214.30 on Dollar weakness. But it immediately reversed after Trump’s tweet on Thursday that China is the one who’s under pressure to make a deal. And “we will soon be taking in Billions in Tariffs & making products at home”. As long as 1187.58 minor support holds, we’d expect further rise ahead through 1214.30. But break will argue that whole rebound from 1160.36 has completed and bring retest of this low.

Now back to Dollar. Friday’s outside bar suggests that a short term bottom if formed. But there is no confirmation of near term reversal yet. As long as 95.73 resistance holds, deeper decline is in favor. But downside should be contained by 38.2% retracement of 88.25 to 96.98 at 93.64 to bring rebound. Break of 95.73 could bring retest on 96.98 high. But for now, we’d expect the medium term consolidation pattern from there to extend for a while before an eventual upside breakout.

Our AUD/JPY short was stopped out at 80.25 last week. We’ve given some analysis on how it went against us here.

In considering new strategy, the confusion that Trump and his administration created on trade relationship with China is puzzling. Do they have a consensus on escalation or de-escalation? Or, will they ever have consensus on the issue? There is no way for us to predict whether the new rounds of tariffs will start or not, or when would it happen. Thus, Dollar, Yen and Aussie pairs are something that we’d prefer to avoid for a week at least. NAFTA negotiations look like never-ending but they could suddenly pop up with a deal. Thus, we’d also like to avoid Canadian Dollar pairs.

Well, it sounds like there’s nothing to trade. But hold on, we still believe in the end, “common sense prevails”. That is, as noted above, Brexit negotiation is on track because it’s handled by rational people, on both sides. If there is any problem, it would more likely arise from within the UK Leave Camp. But we’d doubt if the Brexiteers dare to outturn the deal and push the country into disorderly Brexit. So, any negative news from the UK side will likely have temporary impact on the Pound against Euro. EU has enough problems to handle, including Italy and Turkey, and not to mention US auto tariffs. If there could be a deal with the UK, they’ll do it. Both BoE and ECB have laid down their policy path rather clearly and there is practically no chance to change course for the near term. So fundamentally, Sterling is in upper hand against Euro as the Brexit talks gradually progress towards a deal. 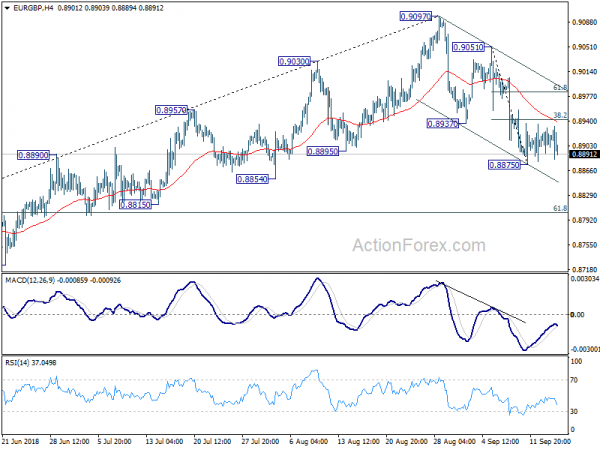 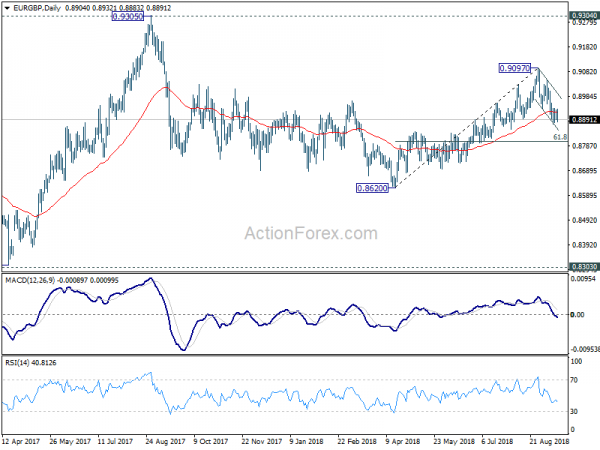 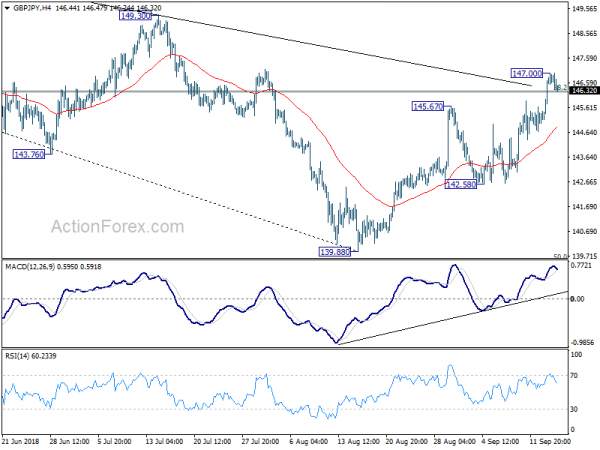 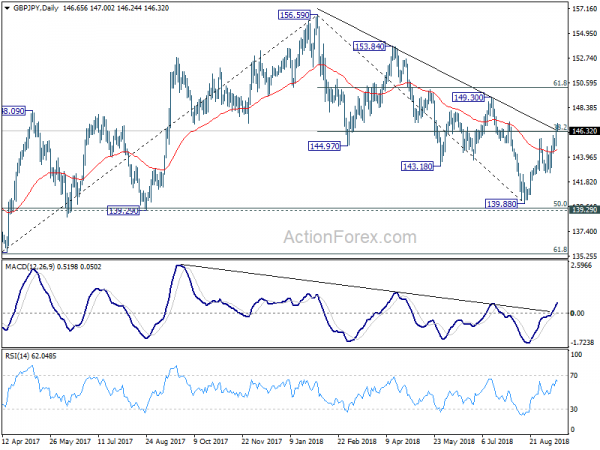 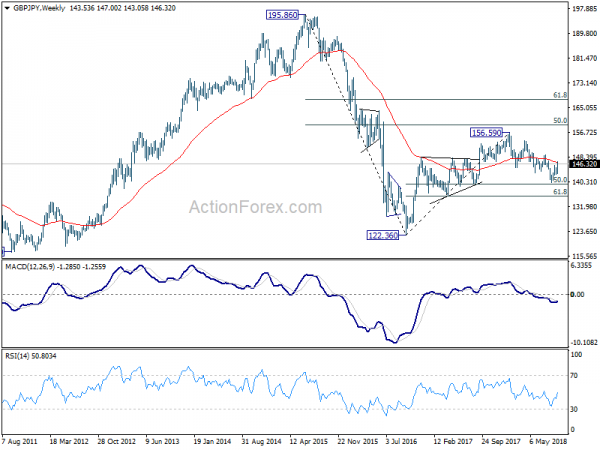 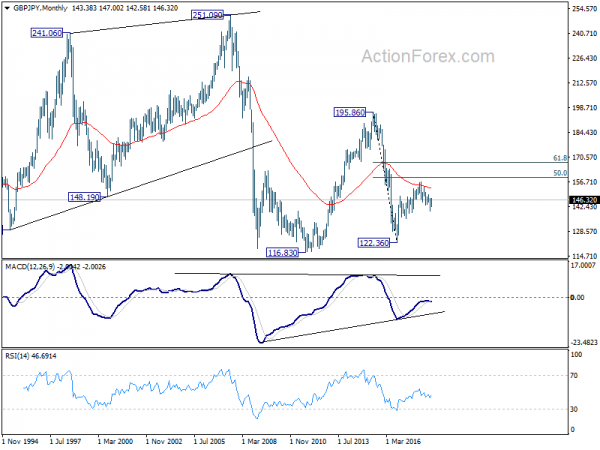