Dollar strengthened overnight after FOMC minutes showed that majority of Fed officials expected interest to enter into restrictive region down the road. Treasury yields also ended up mildly higher. And more importantly, stock markets showed no particular negative reaction to the minutes. USD/CHF’s break of 0.9954 high and USD/JPY’s break of 112.52 minor resistance, in additional to EUR/USD’s fall, are signs of Dollar strength. Though, it clearly lags behind Australian and New Zealand Dollar, for no apparent reasons.

Elsewhere in the currency markets, Yen is the second strongest for today on risk aversion as China is leading Asia down. But Australian Dollar bucks the pattern and is the strongest one. The fall in Australian unemployment rate might be a factor. Sterling is trading as the weakest one as UK Prime Minister Theresa May achieved nothing in the EU summit. Canadian Dollar is the second weakest as WTI crude oil dropped below 70. Euro is the third weakest on Italy budget concern.

Technically, EUR/AUD’s break of 1.6145 minor support today would now sent it back to 1.5984 support. EUR/USD is heading to 1.1431 low too. A focus is on whether EUR/JPY would take out 129.11 to resume the choppy fall from 133.12. As mentioned above, Dollar is showing sign of strength against Euro, Swiss Franc and Yen. But more is still needed. In particular, we’d prefer to see a break of 1.3081 minor support in GBP/USD and 0.7098 in AUD/USD to confirm the underlying momentum of the greenback.

The minutes of September 25-26 FOMC meeting indicated that Fed is still on track for its rate hike cycle. And based on the strength of the economy, policymakers are leaning more towards bring interest rate into mildly “restrictive” levels down the road.

The minutes said “participants generally anticipated that further gradual increases in the target range for the federal funds rate would most likely be consistent with a sustained economic expansion, strong labor market conditions and inflation near 2 percent over the medium term.”

More importantly, the minutes also revealed that “a substantial majority of participants expected that the year-end 2020 and 2021 federal funds rate would be above their estimates of the longer-run rate.” Also, “a few participants expected that policy would need to become modestly restrictive for a time and a number judged that it would be necessary to temporarily raise the federal funds rate above their assessments of its longer-run level”.

However, a “couple” of FOMC members, meanwhile, argued against a restrictive policy “in the absence of clear signs of an overheating economy and rising inflation”. But such argument for now, is seen by economists as precautionary. Fed is still some way off the neutral level.

Fed raised federal funds rates by 25bps to 2.00-2.25% on unanimous vote at the September meeting.

US Treasury refrained from naming China a currency manipulator in the latest “Macroeconomic and Foreign Exchange Policies of Major Trading Partners of the United States” report.

In a statement, Treasury Secretary Seven Mnuchin said the department is “working vigorously to ensure that our trading partners dismantle unfair barriers that stand in the way of free, fair, and reciprocal trade.” And he singled out China as of “particular concern” due to the “lack of currency transparency and the recent weakness in its currency”. Mnuchin added that they will continue to “monitor and review” China’s currency practices.

The statement also noted that despite the lack of transparency, “Treasury estimates that direct intervention by the People’s Bank of China this year has been limited.” Though, it also warned that “recent depreciation of the renminbi will likely exacerbate China’s large bilateral trade surplus with the United States”. It placed ” significant importance” on ensuring China doesn’t engage in “competitive devaluation”.

A total of six major trading partners are put in the monitoring list, including China, Germany, India, Japan, Korea, and Switzerland.

UK Prime Minister Theresa May spent 15 minutes before the EU summit dinner to persuade other leaders on her Brexit plan. But she ended without any progress to break the impasse. European Parliament Antonio Tajani noted the “tone was more relaxed than in Salzburg, undoubtedly”, referring to the last summit. But he also added ” I did not perceive anything substantially new in terms of content”.

More importantly, EU leaders decided that there was no “decisive progress” for calling an unscheduled summit in November. Instead, they’re now targeting to close the deal in December. Though, one EU official was quoted saying “everyone wants to keep the volume low” even though an November summit is very unlikely.

BoJ Governor Haruhiko Kuroda offered a slightly more upbeat view on inflation today, in a quarterly meeting with regional branch managers. He said that consumer inflation was “moving around 1 percent”. That compared to the wordings of moving around 0.5 to 1 percent three months ago. On the economy, Kuroda maintained that it’s “expected to continue expanding moderately”. On monetary policy, Kuroda reiterated that “the BOJ will make necessary policy adjustments to sustain the economy’s momentum to achieve the price target … while looking at risks that warrant attention.”

Australia unemployment dropped to 5%, lowest since 2012, as labor force contracted

Australia unemployment dropped sharply to 5.0% in September, down from prior 5.3% and beat expectation of 5.3%. However, it should also be noted that participation rate also dropped -0.2% to 65.4%. So, the drop in unemployment rate was more a reflection of decline in the size of labor force. Employment grew 5.6k versus expectation of 15.2k. Full-time jobs rose 20.3k to 8.65m. But part time jobs dropped -14.7k to 3.98m.

On RBA monetary policy, NAB noted that markets are pricing in around 90% chance of a 25bps rate hike in the next 12-months. Pricing increased from 70% back in Q2. NAB’s own view is that “RBA will likely begin a gradual series of rate rises in mid-to-late 2019 but that this is highly data dependent.” NAB saw “inflationary pressures best described as meek at present.”

On exchange rate, NAB revised down its own forecasts on AUD/USD to “closer to US$0.70” as “global trade ructions continue to weigh.”

UK retail sales will be the major focus in European session. Swiss will release trade balance. Later in the day, US will release Philly Fed survey and jobless claims.

Intraday bias in EUR/USD remains on the downside for 1.1431 support. Corrective recovery from there should have completed at 1.1621. Break of 1.1431 will resume the decline from 1.1814 and target a test on 1.1300 low. On the upside, above 1.1547 minor resistance will delay the bearish case and wold probably extend the consolidation from 1.1431 with another rebound. In that case, intraday bias will be turned neutral first. 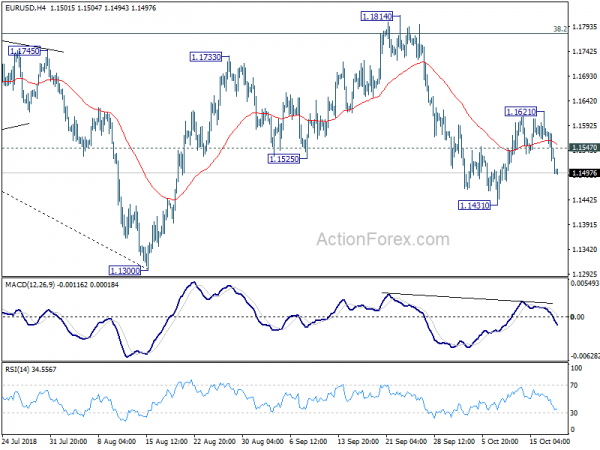 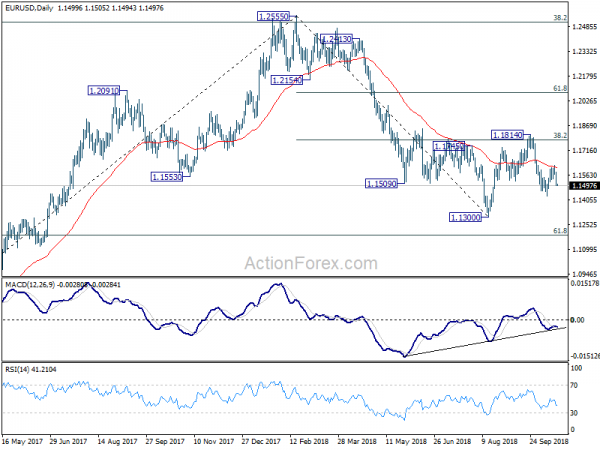