The forex markets are rather quiet today with major pairs and crosses bounded in tight range. Sterling was lifted by news that UK and EU agreed on the declaration on future relationship. But the boost is so far limited as bulls refuse to commit. Eyes will turn to the special EU summit on Sunday, where the withdrawal agreement as a whole would be endorsed by EU27 leaders.

For the week, Swiss Franc is overwhelmingly the strongest one. Pound and Dollar as the second and third strongest are relatively unconvincing. And the two’s position could easily be taken before weekly close. And for now, Australian Dollar is the worst performing one for the week, followed by New Zealand Dollar and then Canadian.

Technically, EUR/GBP is held above 0.8824 minor support. GBP/JPY is also kept below 145.99 minor resistance. Thus, there is no confirmation of bottoming in Sterling. It remains vulnerable to another selloff. 0.8939 resistance in EUR/GBP and 144.02 support in GBP/JPY could come back into focus today. Another things to watch is whether Dollar would come back under pressure, in particular against Swiss Franc and Yen. It’s about time the near term consolidations in both pair complete. So, 0.9908 in USD/CHF and 112.30 in USD/JPY will be watched too.

BoE known hawk Michael Saunders said in a speech that assuming a smooth Brexit, the MPC as a whole judged that further raise hikes are needed over time. And “my own hunch is that, conditioned on our Brexit assumptions, capacity pressures will probably build somewhat faster than envisaged in our latest Inflation Report projections, reinforcing upward pressure on pay growth.” In that case, “we would probably need to return to something like a neutral stance rather earlier than implied by the current yield curve.”

Nevertheless, he also acknowledged “that assumption of a smooth Brexit adjustment is itself uncertain”. And, “any such resolution of Brexit uncertainties may change the economic outlook, perhaps substantially”. More importantly, “the monetary policy implications of different Brexit outcomes could go either way, depending on the effects on supply, demand and the exchange rate.”

In one example, Saunders said transition to a relatively close economic relationship with the EU could boost confidence and propel investment. The same factors could trigger rise in Sterling exchange rate. The next effect could be higher growth and lower inflation. In this case, it’s unclear if more tightening is appropriate.

In another example, revert to WTO trading rules would weaken business confidence and hit investments and hiring. That would drags on growth but at the same time Sterling too. There would also be resultant boost to inflation reinforced by extensions of tariffs. And the net effect is higher inflation and lower growth. The monetary implications “could go in either direction.

ECB Mersch: Imperative for all Eurozone states to adhere to the common rules

ECB Executive Board member Yves Mersch said in a speech that “it is imperative for all Member States to adhere to the common rules”, without naming Italy. And he emphasized ” two principles that are at the heart of effective policy in a democratic society.” “First, liability and control must be aligned, with important decisions taken only by those who will bear their consequences.” “Second, the discharge of democratic control must lie at the level at which policy decisions are taken.

Separately, Chief Economic Peter Praet warned in a Handelsblatt interview published yesterday that “Italy’s current financing conditions are much too tight for a country with weak growth and low inflation.” For now, Praet didn’t see any contagion effect so far. And, ECB won’t intervene if the problems are confined only to Italy. ECB conducts monetary policy for the Eurozone as a whole.

In the minutes for the October meeting released yesterday, ECB acknowledged “uncertainties and fragilities” in the economy. The members noted that risks to the economic outlook is skewed to the downside as driven by the uncertainties related to global trade. Yet, it reiterated the incoming data had not been able to derail Eurozone’s strength. In short, the October meeting concluded that “the incoming data, while somewhat weaker than expected, remained overall consistent with an ongoing broad-based expansion”.

More in ECB Might Keep Policy Rates Low for Longer, Given Downside Risk to Growth and Trade War

A WTO monitoring report released yesterday noted sharp rise in trade restrictive measures in G20 economies between mid-May and mid-Oct 2018. Trade covered of the measures adds up to USD 481B, six time larger than prior reporting period, and highest since record started in 2012.

A total of 40 new trade-restrictive measures were applied, averaging eight per month, including tariff increases, import bans and export duties. That’s notably higher than almost six trade-restrictive measures per month during prior period. 33 new trade facilitating, including eliminating or reducing import tariffs and export duties. The number is in line with 2012-17 trend.

Commenting on the report, Director-General Roberto Azevêdo said “the report’s findings should be of serious concern for G20 governments and the whole international community.” And he warned “further escalation remains a real threat”. And, “if we continue along the current course, the economic risks will increase, with potential effects for growth, jobs and consumer prices around the world.”

GBP/JPY is staying in consolidation above 144.02 temporary low and intraday bias remains neutral first. Also, with 145.99 resistance intact, further decline is in favor. On the downside, break of 144.02 will target 142.76 support first. Sustained break there will bring retest of 139.39/47 key support zone. On the upside, above 145.99 support turned resistance could bring stronger rebound. But near tem outlook will be neutral at best as long as 149.70 key resistance holds. 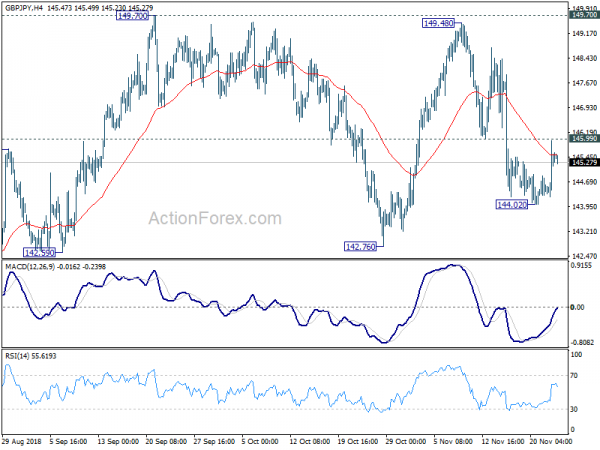 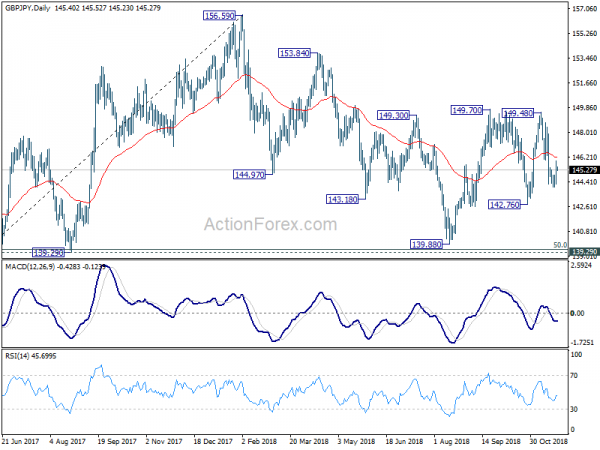