Sterling and Euro are trading as the weaker ones today, in otherwise mixed markets. Dollar appeared to be lifted by Trump’s renewed threats to China on tariffs. He said it’s “highly unlikely” to drop the planned tariff hike on Jan 1 and more could come if no deal is made with Xi this week. But there is no committed follow through buying the greenback yet. US futures now point to lower open, with European indices slightly in red. But Yen also got no sustainable momentum. Australian and New Zealand Dollar are the strongest ones but they’re just stuck in familiar range.

Technically, GBP/USD’s break of 1.2764 minor support would likely bring retest on 1.2661 low soon. GBP/JPY is having an eye on 144.02 minor support and break will resume recent decline from 149.48. While downside momentum is a bit unconvincing, EUR/AUD is still on track for 1.5519 low.

EU will promote “a positive trade agenda, including the reform of the three functions of the World Trade Organisation (negotiating, monitoring and dispute settlement functions”. And it urged that “G20’s support can be instrumental in providing political impetus to the trade discussions in Geneva”.

UK PM May to have TV debate with Corbyn on Brexit

UK Prime Minister Theresa May issued a TV debate challenge to Labour’s Jeremy Corbyn on Brexit. And Corbyn swiftly accepted. The debate could be held on December 9, just two days ahead of Commons vote on the deal. Eventually, other parties’ representatives may also join.

Separately, Cabinet Office Minister David Lidington warned today that “There’s no plan B because the European Union itself is saying the deal that is on the table is the one that we have had to compromise over.” He added “there is a bit of wishful thinking on the part of some people that a preference expressed by politicians in the UK will somehow lead to a different plan, an alternative being offered.”

And, “There is a binary choice for the House of Commons to make: they can accept the deal that is on table, that is a compromise but I think is a good compromise for our national interest, or they can vote it down. The EU 27 is very clear they are not going to reopen this package.” Lidington also admitted that “If the vote were today, it would be a difficult one to win, but I think that we have time between now and (Dec. 11) to make the case.”

GBP/USD’s break of 1.2764 minor support suggests the choppy fall from 1.3174 is resuming. Intraday is back on the downside for 1.2723 first. Break would bring retest of 1.2661 key support level next. On the upside, above 1.2927 will turn bias back to the upside for another rebound. But after all, price actions from 1.2661 are viewed as a consolidation pattern. Even in case of strong rebound, upside should be limited by 1.3316 fibonacci level to bring down trend resumption eventually. 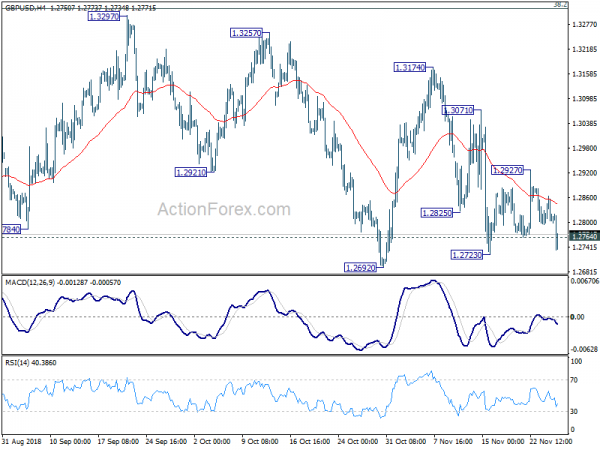 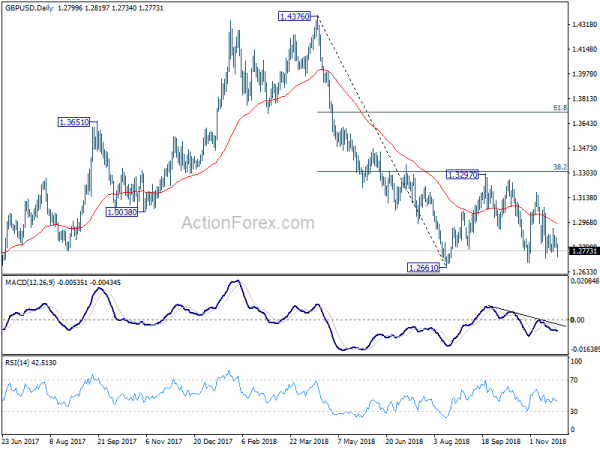