The British Pound makes a strong come back today and is trading as the strongest one at the time of writing. UK government released its long term Brexit economic analysis, showing that Prime Minister Theresa May’s Brexit deal could bring as little as -0.1% drag in GDP in 15 years. Though, Sterling’s rebound today is more due to lack of negative developments and technical, rather than the PM.

Thanks to rebound in the stock markets, Australian Dollar is the second strongest one for today. Dollar is following as the third strongest but it could be vulnerable. Trump just renewed his personal attack on Fed chair Jay Powell and said he’s “not even a little bit” happy with him. Powell’s speech today will be closely watched for any responses, or change in tone. Meanwhile, Canadian Dollar is weakest followed by Yen and then Euro.

Technically, GBP/USD’s rebound ahead of 1.2723 support suggests temporary bottoming at least. Focus is back to 1.2927 minor resistance. ERU/GBP’s break of 0.8824 minor support indicates rejection by 0.8939 resistance. And risks is now skewed to the downside for 0.8655 support. GBP/JPY will be eying 145.99 minor resistance to confirm short term bottoming.

The UK Government released a series of five papers on Brexit today. The most anticipated in the one on long term economic analysis of Brexit. In short, according the government, in 15 years by 2034 after Brexit:

In the parliament, Prime Minister Theresa May hailed her own plan and said “What the analysis shows, it does show that this deal that we have negotiated is the best deal for our jobs and our economy which delivers on the results of the referendum.”

ECB Vice President Luis de Guindos said in a speech that Eurozone economy is “continuing to grow” and the growth is “broad-based across countries and sectors”. He added that “during this recovery, the countries that were most affected by the crisis have regained competitiveness thanks to a combination of accommodative monetary policy, fiscal consolidation and structural reforms.”

However, de Guindos warned that “challenges remain in the form of low trend growth compared with other advanced economies, and persistently high public and private debt levels in a number of euro area countries.”. He urged further efforts to “strengthen productivity growth and boost productive investments to lift long-term potential growth.”

Italian Economy Minister Giovanni Tria said today that the coalition government is seeking to adjust its 2019 budget plan. They’d still have to support economic growth, but at the same time need to avoid disciplinary actions by European Commission. Tria said “we are attentively seeing if there is financial space to improve the balance between the need to support growth and the need to solidify the sustainability of the public accounts.”

Separately, Deputy Prime Minister Luigi Di Maio, leader of Five-Star Movement, said “we must talk with the EU to find a solution, but we cannot betray the promises we made, otherwise we will become like all the other (governments).”

Chinese President Xi Jinping is visiting Spain today and he’s supposed to meet Trump later in the week in Argentina as sideline of G20 summit. Xi repeated his messages to the Spanish upper house of parliament that China planned to import USD 10T worth of goods over the next five years.

GBP/USD formed a temporary low at 1.2725, ahead of 1.2723 support and recovered. Intraday bias is turned neutral again. On the upside, above 1.2927 resistance will bring stronger rebound to 1.3071 and possibly above. On the downside, break of 1.2725 should extend recent fall to retest 1.2661 key support. After all, price actions from 1.2661 are viewed as a consolidation pattern. Even in case of strong rebound, upside should be limited by 1.3316 fibonacci level to bring down trend resumption eventually. 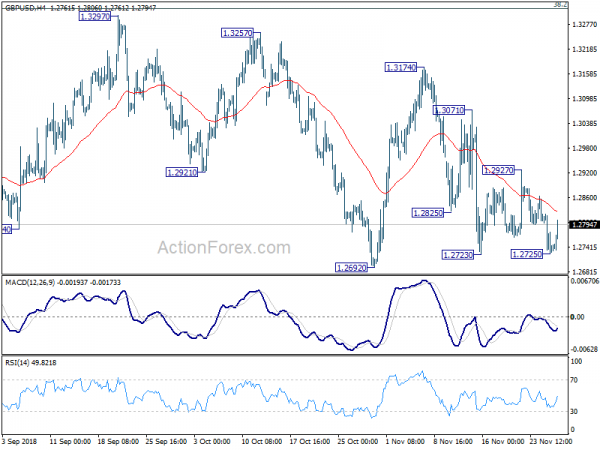 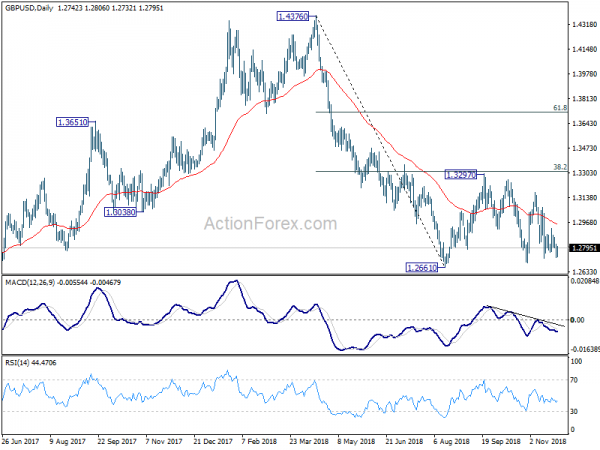