Commodity currencies are trading broadly higher today as risk appetite is lifted by optimism over US-China trade negotiations in Beijing. Canadian Dollar is additionally supported by rally in oil price, with WTI breaking 50 handle. On the other hand, Yen is trading as the weakest one, followed by Swiss Franc and Dollar. Euro is not too far away. BoC rate decision will be a bit of wild card today. While it’s expected to keep monetary policy unchanged, it’s far from being certain. And the new economic projections might not be as dovish as expected.

Technically, USD/CAD’s decline from 1.3664 is in progress for next near term fibonacci level at 1.3118. While the fall is steep and deep, it’s too early to declare medium term bearish reversal yet. Reactions to 1.3118 might provide some clues though. Yen crosses are starting to lose upside momentum, as most apparently in EUR/JPY and GBP/JPY. 122.84 and 136.61 minor support levels will possibly be back in focus today. EUR/USD, GBP/USD and USD/CHF are stuck in tight range. Dollar tried to rebound with treasury yield overnight but couldn’t sustain. 0.9789 in USD/CHF, 1.1499 in EUR/USD and 1.2814 in GBP/USD will be watched as sign of renewed Dollar weakness.

Global stocks are lifted by news that China-US trade talks in Beijing are extending into an unscheduled third day, with signs of good progress. It’s confirmed by a US Trade Representative spokesperson who said “a statement will likely follow then.” Nevertheless, the extension itself is affirmative as both sides need time and efforts to full exchange their views before getting close to an agreement by 90-day deadline on March 2.

Trump tweeted yesterday that “Talks with China are going very well!” Reuters also reported quoting unnamed source saying “Overall the talks have been constructive. Our sense is that there’s good progress on the purchase piece.” However, it’s unknown how China is going to address a key issue of intellectual property theft.

But at least, this week, China issued long-awaited approvals for import of five genetically modified crops which would boost import of US grains. There was also another larger purchase of US soybeans. These are widely seen as gestures of good will.

Separately, the China Daily said in an editorial China “will not seek a solution to the trade frictions by making unreasonable concessions, and any agreement has to involve give and take from both sides.”

Trump’s oval speech did no breakthrough on government shutdown

Trump used his Oval speech to bluntly demand the Congress to provide USD 5.7B funding to build the border wall. Trump questioned “How much more American blood must be shed before Congress does its job?” and pointed to the numbers of crimes committed by illegal immigrants. But he didn’t declare national emergency to use military funds for the wall.

Democratic speaker of the House of Representatives Nancy Pelosi responded and said “The president has chosen fear. We want to start with the facts”. She added “The fact is, President Trump has chosen to hold hostage critical services for the health, safety and well-being of the American people and withhold the paychecks of 800,000 innocent workers across the nation, many of them veterans.”

Senate Democratic leader Chuck Schumer said “The symbol of America should be the Statue of Liberty, not a 30-foot wall”. And, “So our suggestion is a simple one. Mr. President: Reopen the government and we can work to resolve our differences over border security. But end this shutdown now.”

So, overall, there is no sign of a breakthrough regarding the shutdown yet, which is already in it’s third week.

BoC rate decision will be a major focus today. We’d maintain that BoC will keep policy rate unchanged at 1.75%. Besides releasing the statement and Monetary Policy Report, the central bank would also update the economic forecasts and host a press conference. The focus of the meeting would be possible downward revisions on the growth outlook and forward guidance on the policy stance. We expect the central bank to maintain the dovish tone laid down in the December meeting.

We expect BOC to trim its inflation forecast due to lower energy prices. Current rebound in oil price was mainly driven by the Saudi-led production cut and US-China trade talk. We believe the boosts to oil prices are short-lived. Global economic slowdown this year is prone to limit demand for oil, limiting the rally in oil prices. BOC should also downgrade its GDP growth estimate modestly. In the near- term growth would be dampened by Alberta’s compulsory reduction in oil output, effective in the New Year. In the longer-term, the country’s economic growth would be affected by the overall slowdown in the global economy.

Also on BoC: Bank of Canada to Put Rate Hikes Aside for Now

German trade balance, Eurozone unemployment rate and Swiss CPI will be featured in European session. Later in the day, Canada will release housing starts and BoC rate decision. US will release FOMC minutes. 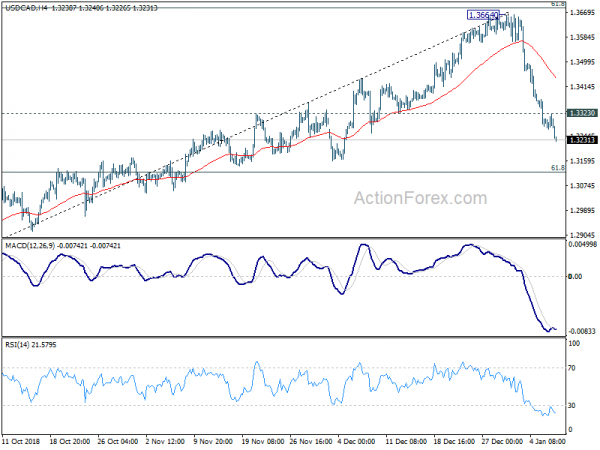 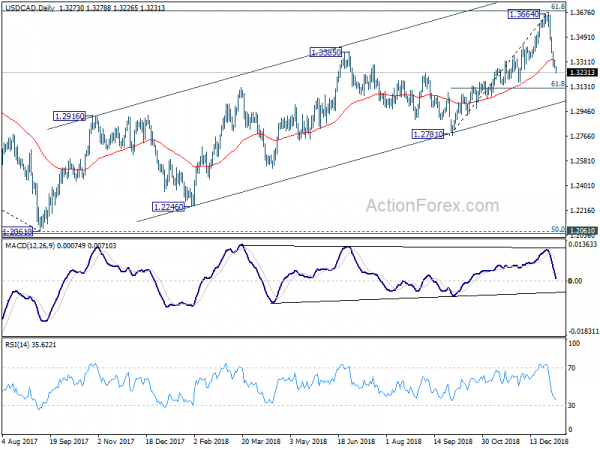