The historic defeat of UK Prime Minister Theresa May over the Brexit deal triggered some volatility in the Pound. But no clear direction is seen in Sterling after all the moves. It’s staying bounded in relatively tight range overall, with a bias for further rise. UK CPI is usually a mover in normal circumstances. But traders might only be willing to commit further after the no-confidence vote. For now, Sterling will likely gyrate in established range first.

On the other hand, clear down side bias is seen in Euro. Worries over slowdown in Eurozone economy is deepening. ECB President Mario Draghi also noted that the slowdown might be longer than expected. Weakness in Euro is somewhat dragging down the Swiss Franc too. Overall for the week, Sterling remains the strongest one while Euro is the weakest.

Technically, EUR/USD is heading back towards 1.1307 minor support while USD/CHF is heading to 0.9963 minor resistance. Break of these level will carry near term bearish implication for both Euro and Franc. EUR/JPY is also pressing 123.40 minor support. Firm break there will open up more decline back to 118.62 low.

UK Prime Minister Theresa May suffered humiliating defeat over her Brexit deal. It’s voted down by 432 to 202 in the Commons, the biggest loss in modern UK history. It’s uncertain what the path will be exactly like after this point. But what’s sure is that opposition Labour Party leader Jeremy Corbyn has swiftly called for a no-confidence vote in the government. And that would be held at 1900GMT on Wednesday, today.

In a well-prepared statement, May said in the parliament after the defeat that “It is clear that the House does not support this deal.  But tonight’s vote tells us nothing about what it does support.  Nothing about how – or even if – it intends to honor the decision the British people took in a referendum Parliament decided to hold.”

She added that the first thing to do is to “confirm whether this government still enjoys the confidence of the House.” Secondly, she will meet with Conservatives, DUP and other  senior parliamentarians from across the house to find “ideas that are genuinely negotiable and have sufficient support in this House.” Thirdly, she will go back to EU with those ideas.

Regarding the outcome of the Brexit meaningful vote in the UK Commons, European Commission responded with a quick statement. President Jean-Claude Juncker warned that “time is almost up” and urged the UK to “clarify its intentions as soon as possible”. He also noted that “the risk of a disorderly withdrawal of the United Kingdom has increased with this evening’s vote. While we do not want this to happen, the European Commission will continue its contingency work to help ensure the EU is fully prepared.”

European Council President Donald Tusk also tweeted that “If a deal is impossible, and no one wants no deal, then who will finally have the courage to say what the only positive solution is?”

ECB President Mario Draghi told the European Parliament yesterday that the Eurozone economy is weakening more than expected. Though, he emphasized that “it’s a slowdown, which is not heading towards a recession but it could be longer than expected before,”

Hence, Draghi reiterated “a significant amount of monetary policy stimulus is still needed to support the further build-up of domestic price pressures and headline inflation developments over the medium term,” Also, he added that “Our forward guidance on the key ECB interest rates, reinforced by the reinvestments of the sizeable stock of assets we have acquired, continues to provide the necessary degree of monetary accommodation.”

The People’s Bank of China injected record amount of cash into the market to “maintain “reasonably ample” liquidity in the banking system. The central bank said the act was to provide support for the current peak period for tax payments. And it came at a time when “the banking system’s overall liquidity is falling rapidly”.

The act is seen as a sign of consensus in the Chinese government for decisive stimulus to the economy, in light of the ugly trade data as released earlier this week.

Later in the day, US will release import price index, NAHB housing index and Fed’s Beige Book. Due to record government shutdown, retail sales and business inventories will miss schedule.

Despite dipping deeply to 1.2668 and breached 1.2709 minor support, GBP/USD quickly recovered, strongly. Intraday bias stays neutral first. For now, further rise is still mildly in favor. On the upside, break of 1.2930 will extend the corrective rebound from 1.2391 to 1.3174 resistance, which is close to 38.2% retracement of 1.4376 to 1.2391 at 1.3149. We’d expect strong resistance from there to limit upside, at least on first attempt. On the downside, break of 1.2668 should now confirm completion of the rebound. In this case, intraday bias will be turned back to the downside for retesting 1.2391 low. 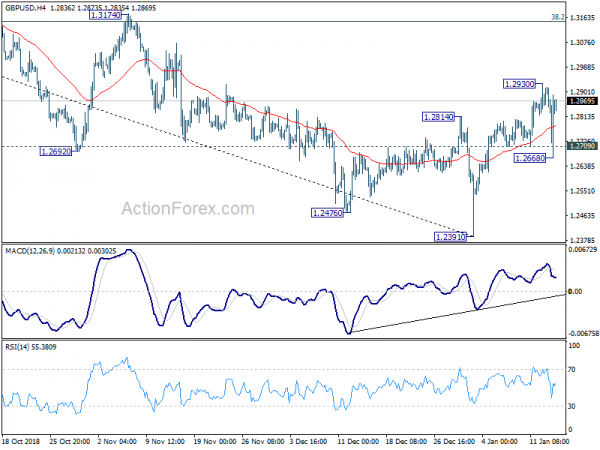 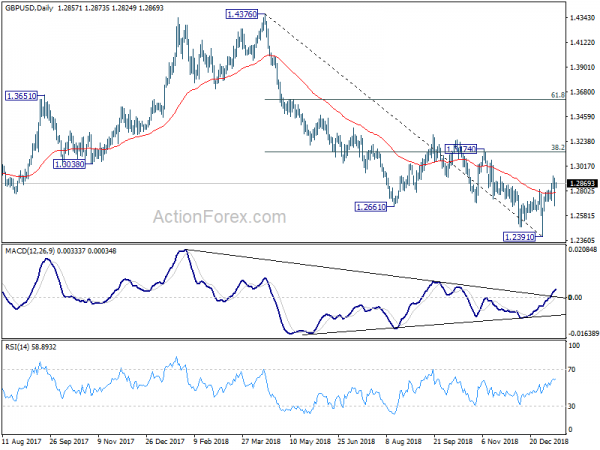