The forex markets are rather quiet today. Sterling, US Dollar and Canadian Dollar are the stronger ones The Pound is supported by increasing chance of a delay in Brexit, or no Brexit at all. Canadian Dollar is lifted as WTI crude oil rebound and is back at 51.8. Meanwhile, the greenback follows long treasury yields higher, ignoring the record government shut down. Euro is staying soft on slowdown worries. But Australian and New Zealand Dollar are even weaker.

Technically, we’d maintain that EUR/USD’s corrective rise from 1.1215 is possibly completed earlier than expected at 1.1569. Further decline is mildly in favor for 1.1307 next. USD/CHF’s breach of near term channel resistance is also a bullish development. Focus will now be on 0.9965 resistance. Yen crosses are bounded in tight range for now, awaiting breakout. While Sterling is firm, there is no committed buying yet.

In the UK, eyes are now first on no-confidence vote on Prime Minister Theresa May at 1900GMT. After yesterday’s humiliating 432 to 202 defeat of her Brexit deal, May told the parliament today that “What the government wants to do is first of all to ensure that we deliver on the result of the referendum”.

She added that “We want to do it in a way that ensures we respect the votes of those who voted to leave in that referendum. That means ending free movement, it means getting a fairer deal for farmers and fishermen, it means opening up new opportunities to trade with the rest of the world.”

Opposition Labour leader Jeremy Corbyn urged a new election. He said “if a government cannot get its legislation through parliament, it must got to the country for a new mandate”. And, “there can be no doubt that this is indeed a zombie government.”

Conservative backbencher Dominic Grieve, proposed two new bills that would enable preparations for a second referendum. He expected the government to disregard it as it controls the time and schedule for debates. But he added “if Parliament seizes control, then I imagine time will be found for it,” and “it’s a marker, so once it’s down it can be used.”

German news paper Handelsblatt reported that Germany, the Netherlands and some other EU countries are trying to explore some concessions regarding the issue of Irish border backstop. But we’ll tend not to pay too much attention to rumors, until they’re confirmed.

BoE Governor Mark Carney told the parliament that after yesterday’s vote in the Commons, the risk of a no-deal Brexit has diminished, or the process would be extended. But Carney emphasized that “I’m not giving my view, I’m giving the markets’ initial take”. Also he added “I wouldn’t put much weight on these very short term-moves. The market is waiting.”

ECB Nowotny: Brexit uncertainty is a psychological problem for banks, not technical

ECB Governing Council member Ewald Nowotny warned that “nothing is as damaging as this long, prolonged uncertainty,” regarding Brexit. However, he added that “from the point of view of the banking side perhaps it’s not so much a technical problem because I think here we are pretty well prepared for whatever outcome there might be”.

Reuters reported, quoting unnamed source that BoJ will likely lower inflation forecasts at next week’s meeting. It’s noted that oil prices have fallen significantly since the last economic projections back October. And that would have a negative impact on the upcoming projections to be published along with the meeting last week. Though, on growth, BoJ will likely maintain its upbeat assessment.

Back in October, BoJ projects core CPI to hit 1.4% in fiscal 2019 and then 1.5% in fiscal 2020. Such projections would be trimmed to reflect the decline in oil as well as global slowdown.

The People’s Bank of China injected record amount of cash into the market to “maintain “reasonably ample” liquidity in the banking system. The central bank said the act was to provide support for the current peak period for tax payments. And it came at a time when “the banking system’s overall liquidity is falling rapidly”.

The act is seen as a sign of consensus in the Chinese government for decisive stimulus to the economy, in light of the ugly trade data as released earlier this week. 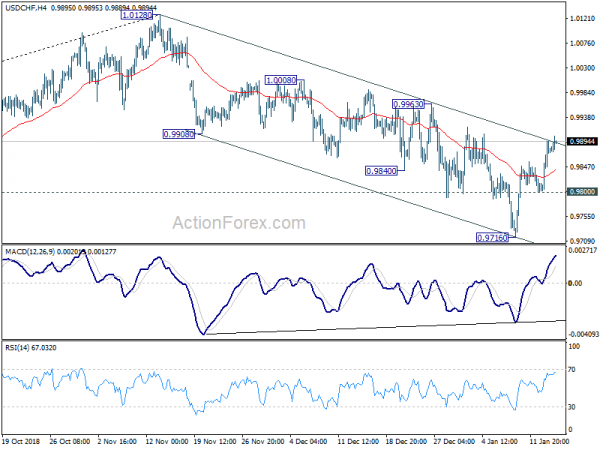 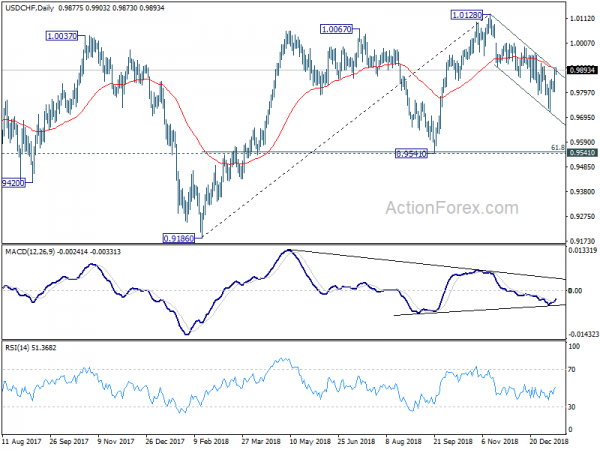