The financial markets are rather quiet today. Asian stocks trade higher despite data showing China’s growth in 2018 slowed to lowest since 1990. But December data painted a picture of stabilization. Also, there is optimism on US-China trade talks, despite a lack of detail on the progress. Meanwhile, Yen, Euro and Australian Dollar are the relatively stronger ones today so far. New Zealand Dollar, Sterling and and Dollar are the weakest. Focus will turn to UK Prime Minister Theresa May’s Brexit plan B.

Technically, USD/CHF is set to take on 0.9963 resistance. Decisive break there will confirm completion of correction from 1.0128 at 0.9716. And further rise would be seen back to retest 1.0128. EUR/USD stays weak even though downside momentum is diminishing. We’d still expect at least a take on 1.1307 minor support. The main question today is whether current Friday’s dip in Sterling is just a retreat, or it’s revering. For now, As long as 1.2668 minor support in GBP/USD and 0.8927 resistance in EUR/GBP hold, we’d favor more upside in the Pound first.

China GDP growth slowed to lowest in 28 years, but stabilization seen in December

China GDP growth slowed to 6.4% yoy in Q4, down from 6.5% yoy and matched expectation. For the whole year of 2018, growth slowed to 6.6%, lowest in 28 years since 1990. National Bureau of Statistics head Ning Jizhe said the impacts from trade war with the US are manageable. There were signs of stabilization in the economy over the past twos months. And he added the country has confidence and the capacity to achieve reasonable growth in 2019.

While there were signs of improvements in Decembers, it’s generally expected that the Chinese economy will face downward pressure ahead. In particular, the risks of escalation in trade war with the US remains. Chinese Vice Premier Liu He is set to visit Washington on January 30-31 for another round of trade talks. At this point, little sign of progress is seen regarding the core concerns of the US, including intellectual property theft, forced technology transfer and dominance of state-owned enterprises.

More stimulus is expected from the authority to support the economy. The PBoC has already injected CNY 560B into the economy last Wednesday. The RRR was also lowered again earlier this year to free up Monday for small companies. Yet, it’s reported that Beijing was planning to lower its growth target to 6-6.5 percent this year.

The likelihood of a recession in Japan rose due to global economic slowdown and the indirect impact of US-China trade war, according to a Reuters poll between Jan 9-18. Yet economists were still optimistic that Japan economy will grow 0.8% in the fiscal year starting April.

28 of 38 economists said the chance of recession in fiscal 2019 has risen comparing with three months ago. 27 of 39 said Prime minister Shinzo Abe has over 80% chance to go ahead with the planned sales tax hike. For the October-December quarter when sales tax is raised, economist expected a sharp contraction of -3% in GDP. But over the fiscal year, it’s estimated to expand 0.8%, then slow to 0.6% in fiscal 2020. National core CPI is seen to rise only 0.6% in fiscal 2019, staying way off BoJ’s 2% target.

Brexit: No solution to Irish backstop yet after May’s Cabinet conference call

UK Prime Minister Theresa May is due to return to the parliament today to set out her Plan B on Brexit. The center of focus is her amendments regarding the Irish border backstop. May is trying to put up something that’s, at the very least, acceptable to her fellow Conservatives and Northern Ireland ally DUP. But the Guardian reported that no solutions were found so far during the conference call with the Cabinet on Sunday evening. The consensus was only to renew efforts to find acceptable changes to the backstop arrangement with the EU, without any specifics.

Trade Minister Liam Fox warned over the weekend that “failure to deliver Brexit would produce a yawning gap between parliament and the people, a schism in our political system with unknowable consequences”. And, that could trigger a “a political tsunami”. And, he added that “Parliament has not got the right to hijack the Brexit process because Parliament said to the people of this country: ‘we make a contract with you, you will make the decision and we will honour it'”.

Opposition Labour leader Jeremy Corbyn reiterated the call for May to rule out no-deal Brexit. He said in a statement that “We’re ready to talk to the government and others in parliament about a sensible alternative plan, but not while Theresa May is wasting 171,000 pounds an hour of taxpayers’ money on dangerous and unnecessary no-deal brinkmanship.” And, “If the prime minister is serious about finding a solution that can command support in parliament and bring our country together, she must listen to the majority of MPs, as well as members of her own cabinet, and take ‘no deal’ off the table.”

ECB and BoJ top a busy calendar, except for the US

The economic calendar is rather heavy this week, except for the US who’s extending the record government shutdown. ECB meeting will be a focus. The central bank might turn a bit cautious, or even dovish on its assessment on the economic outlook. It would likely suggest that risk to growth is tilted to downside. On the monetary policy outlook, it would refrain from making any change to the forward guidance, although the market has already pushed back their rate hike expectations. Also, Eurozone will release German ZEW and Ifo, as well as PMIs. Pretty busy.

BoJ meeting will be another focus, in particular, it l release new economic projections. We may see downward revision in inflation estimates. December CPI data showed that even discounting the fall in energy prices, consumer inflation stayed week. And apparently, the recovery is not passed on to consumers. And business remained reluctant to raise prices. The data added to the case for BoJ to cut inflation forecasts. Back in October, BoJ projects core CPI to hit 1.4% in fiscal 2019 and then 1.5% in fiscal 2020. Such projections would be trimmed to reflect the decline in oil as well as global slowdown.

Elsewhere, development regarding Brexit will be the main focus too. UK will also release job data. New Zealand CPI, Australia employment and Canada retail sales could also be market moving.

Here are the highlights for the week:

Intraday bias in AUD/USD remains neutral for consolidation below 0.7235 temporary top. As long as 0.7116 minor support holds, further rally is in favor. On the upside, break of 0.7235 will target 0.7393 resistance. We’d expect strong resistance from there to limit upside. On the downside, break of 0.7116 minor support will suggest completion of rebound from 0.6722. Intraday bias will then be turned back to the downside for retesting this low. 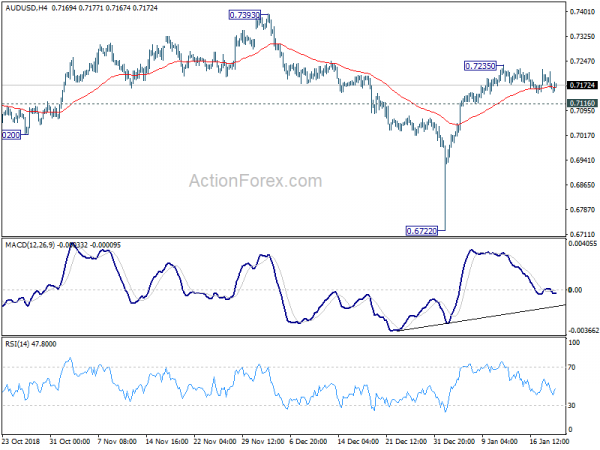 In the bigger picture, the failure to sustain below 0.6826 (2016 low) suggests that the long term down trend is not ready to resume yet. But prior rejection by 55 week EMA indicates underlying medium term bearishness in the pair. Outlook will also stay bearish as long as 0.7393 resistance holds. On the downside, sustained break of 0.6826 will target 0.6008 (2008 low). 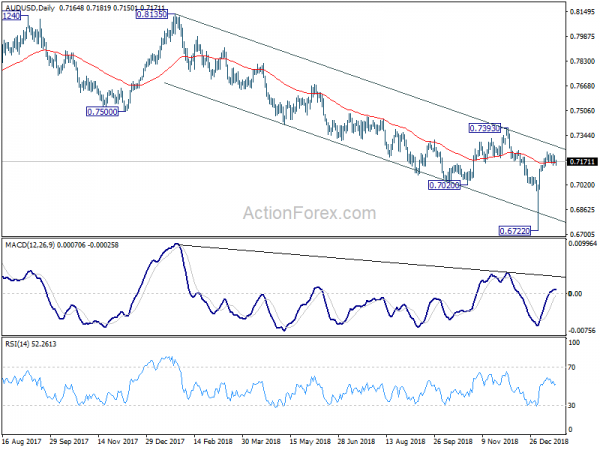