The forex markets remain rather quiet today so far. The selloff in stocks and oil overnight triggered some pull back in Canadian and Australian Dollars, but losses were limited. Similar, Yen was given just a mild pop while it’s unmoved by the shallow decline in Asian stocks.

Though, “softness” in Sterling is the general theme so far as it’s paring yesterday’s strong gains. Focus is turning to the UK Commons today. MPs will vote on Prime Minister Theresa May’s so-called plan B. But importantly, they will vote on amendments which could shape the way forwards. In particular, there are amendments including ways to block no-deal Brexit.

Technically, Sterling will be in focus today. EUR/GBP recovers after breaching 0.8620 key support. But such recovery is so far rather weak. GBP/USD also retreats, in rather shallow way, after breaching 1.3174 resistance. Positive news on Brexit today could give the Pound a boost. And firm break of the two levels will carry larger bullish implications for Sterling.

US Treasury Secretary Steven Mnuchin said yesterday that “IP (intellectual property) protection, no more forced joint ventures, and enforcement are three of the most important issues on the agenda” in trade negotiation with China.

He emphasized that “we want to make sure that when we get a deal, that deal will be enforced.” Though, he also admitted “The details of how we do that are very complicated. That needs to be negotiated.”

Mnuchin, a relative trade dove, also said there had been “significant movement” in the trade talks so far. And he expected this week’s meetings to end with significant progress.

China’s Xinhua news agency reported that a Chinese delegation led by Vice Premier Liu He arrived in Washington yesterday, for the meeting with US Trade Representative Robert Lighthizer. PBoC Governor Yi Gang is expected to join the meeting too. On the US side, Lighthizer will lead the talks with participation from Mnuchin, Commerce Secretary Wilbur Ross, White House economic adviser Larry Kudlow and White House trade and manufacturing adviser Peter Navarro.

EU deputy chief negotiator Sabine Weyand reiterated that “there will be no more negotiations on the Withdrawal Agreement”. And given just 60 days from the March 29 Brexit date, time is already tight to complete the ratification of the treaty. However, she also pointed out “where we do have margin is on the political declaration”. But she also emphasized that “we need decisions on the UK side on the direction of travel.”

Also, Weyand echoed chief negotiator Michel Barnier’s comments regarding Irish backstop. She said “a time-limit on the backstop defeats the purpose of the backstop because it means that once the backstop expires you stand there with no solution for this border.”

ECB President Mario Draghi appears in the Hearing of the Committee on Economic and Monetary Affairs of the European Parliament yesterday. Regarding Euro’s internal dimension, Draghi said “euro has indeed provided two decades of price stability”. And, thanks to the “collective efforts of all European citizens, the euro area has emerged from” the global financial crisis, with “22 consecutive quarters of economic growth, the unemployment rate at its lowest level since October 2008, and wages and incomes on the rise.”

But Draghi also repeated last week’s cautious comments. He noted “over the past few months, incoming information has continued to be weaker than expected on account of softer external demand and some country and sector-specific factors. The persistence of uncertainties in particular relating to geopolitical factors and the threat of protectionism is weighing on economic sentiment.” He reiterated that “significant monetary policy stimulus remains essential”, and “the Governing Council stands ready to adjust all of its instruments”.

On Euro’s external dimension, Draghi said since the global financial crisis, “the euro’s international role seems to have gradually eroded. While its importance as the currency of invoice for international trade transactions has remained broadly stable, its role in global foreign reserves and global debt markets has declined.” And he urged that “the international role of the euro is supported by the pursuit of sound economic policies in the euro area and a deeper and more complete EMU. And this requires further efforts along the path of deeper integration.”

The office noted in the monthly report that “we need to keep in mind that there is uncertainty about how trade disputes and China’s economic outlook will affect the global economy.”

On inflation, the report noted that consumer prices have leveled off. It’s another downgrade from last month’s description that gains were slowing. Consumer spending was recovering while capital expenditure was increasing. Both assessments were unchanged.

Australia NAB Business Confidence was unchanged at 3 in December. However, Business Conditions dropped sharply by -9 pts from 11 to 2. That’s the largest monthly fall since the global financial crisis. And the deterioration was “relatively broad-based across states and industries”.

NAB also noted that “at face value, the fall over the past 6 months suggests a significant slowing in the momentum of activity in the business sector – especially from the highs seen earlier in the year.”

Swiss will release trade balance in European session. US will release S&P Case-Shiller house price and consumer confidence. But main focus will be on Brexit votes in Commons, and any comments on US-China trade talks. 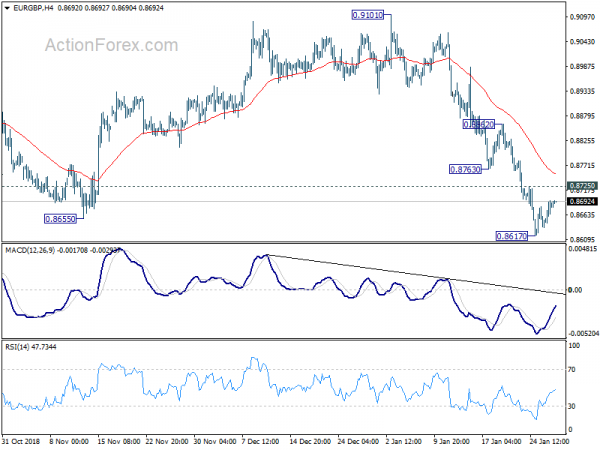 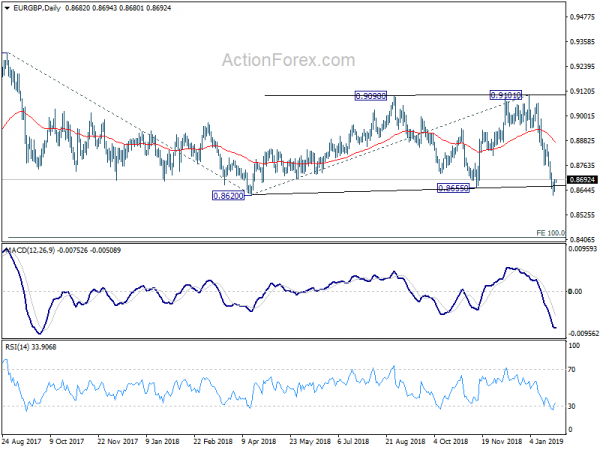